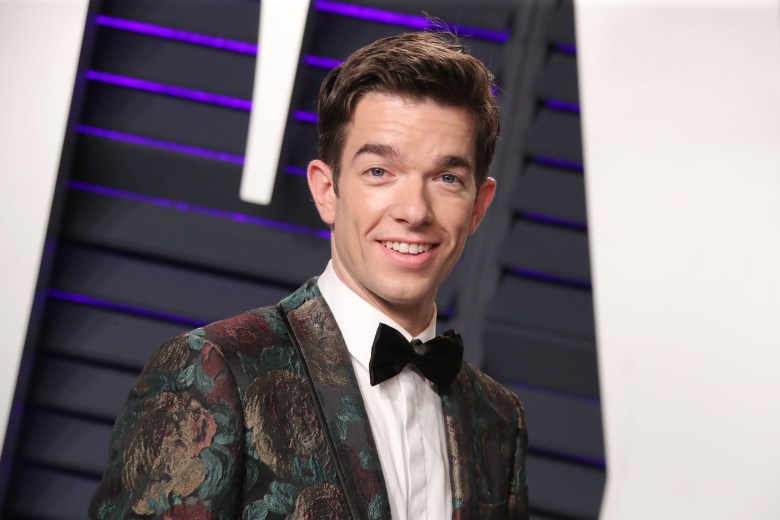 Mr. Music was, as so many things are, a great idea born out of boredom.

This is what the comedian and host of “John Mulaney & the Sack Lunch Bunch” revealed during the above video interview, during which he walked us through the creation of the show’s breakout character, as portrayed by Oscar-nominated actor Jake Gyllenhaal.

Mulaney was toiling away on an original song for the special with “Sack Lunch Bunch” co-writer Marika Sawyer and composer Eli Bolin, but grew disenchanted with the task at hand and instead started riffing on those people who claim you can hear music everywhere. And Mr. Music was born.

Described as, “if Sebastian from ‘The Little Mermaid’ was not helpful,” Mr. Music makes his grand debut as the finale of the hour-long special. Like the worst possible music education guest speaker, Mr. Music sets out to teach the children that music can be found all around them and attempts to illustrate the idea through song — and an escalating series of failed sound experiments, including (but not limited to) low-flo toilets, pudding cups, quiet cats, and swirling wine.

It’s Mr. Music that registered Mulaney’s favorite piece of cultural criticism on the special, in fact.

“Someone messaged me that they were walking down the street with their 5-year-old boy and he started just chuckling to himself and he said to himself, ‘That guy threw a clarinet out the window. He’s so crazy.’”

It’s manic and delightful, like most everything in the hour-and-10-minute special populated by a dozen talented youngsters, a platoon of guest stars, including Talking Heads frontman David Byrne and dedicated to celebrating the children’s programming of the 1970s and ’80s, in conjunction with the heart of all great kid-focused entertainment: fear.

And while Mr. Music might not specifically have been brought in as a representation of the concerns of kids — in truth, his epic flameout is a better encapsulation of every adult anxiety dream where you show up unprepared for a test, find out you haven’t graduated high school, are the lead in a play on opening night and didn’t learn your lines, are trying to drive a car from the backseat, or all of the above and also your teeth are falling out for no reason — the seamless blending of fun and frenzy with open dialogue about fear is a large part of what makes “Sack Lunch Bunch” so spectacular.

Mulaney, who made no qualms sharing his own childhood fears, was blown away, not by the concerns of his multitude of child co-stars, but how they handled their trepidation.

“What they were most afraid of were bugs and riptides and demons who will creep up on you if you don’t face out towards the room. And dying, and their loved ones dying. So it was very familiar to me,” Mulaney said. “But the thing that really made this project so special to me is, I think, these kids at least, were really able to self-soothe in a way I wasn’t. I don’t know if their emotions have been a little more validated maybe, but they had a firmer understanding of, ‘Well, these things I’m terrified of might happen.”

The comedian continued by pointing out that one of the kids, toward the end of the special, shares that he comforts himself about the prospect of losing his family and friends by remembering that they’re here now and beyond that, they’ll always be with him in his heart.

“I’m 37,” Mulaney said, “and I would have trouble coming to that very true realization.”

Living in the world at this moment offers a lot of insecurities that are difficult to self-soothe your way through. Mulaney expounded on one of them in his 2018 Emmy-winning comedy special for Netflix “John Mulaney: Kid Gorgeous at Radio City,” when he presented a detailed analogy that compared the presidency of Donald Trump to a horse being loose in a hospital.

Given the erratic nature of the horse and the sad reality that hospitals are more devastated than ever, we asked the writer if he could offer any comfort to a child (or adult) who found new wells of fear given the current global landscape. He paused a long while to gather his thoughts before sharing.

“It may seem like a long time, God forbid it’s longer than we hope, but there will come a day when the horse is not in the hospital,” Mulaney assured us, adding. “I remember when there wasn’t a horse in the hospital, and it wasn’t long ago.”

This Article is related to: Awards Season Spotlight and tagged Direct, Video