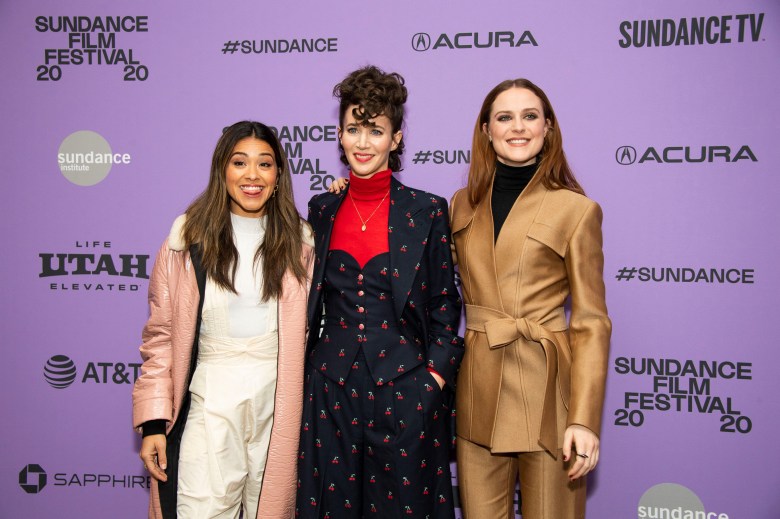 When Miranda July’s “Kajillionaire” premiered at the Sundance Film Festival, it marked the writer-director’s reentry to feature-filmmaking for the first time in over a decade since “The Future” made its debut at the 2009 festival. But the multi-disciplinary artist’s creative output in the interim was prolific — she made an app, profiled Rihanna for the New York Times’ T Magazine, did a performance, and wrote a novel, just to name a few projects. For July, whose non-film projects are often solo, there was something special about bringing a script she penned to the screen with cast Evan Rachel Wood, Richard Jenkins, Debra Winger, Gina Rodriguez, and Mark Ivanir.

“I have projects where the whole thing is just me sitting alone writing — there’s never another next step with a book,” July said during an interview with some of her cast at the IndieWire Studio, presented by Dropbox. “I also am so delighted by what other people know, because I’m so used to the limits of what I know and pushing on those and it’s like being handed gold each day.”

The film follows an oddball Los Angeles family (Wood, Jenkins, and Winger) whose idiosyncratic world is defined by their existential fear of earthquakes and the low-stakes grifts they rely on to barely make rent for their home, a cheap office space next to a bubble factory. Their reality is upended when, during their swindling, they meet a charismatic woman (Rodriguez) who is eager to participate in their insular lives.

During shooting each day, July would take notes in a reporter’s notebook and cross them off as she related them to the cast. July said she would reflect back at the end of each day on her ride home with two other colleagues — her expectations were often wildly exceeded after seeing what collaboration did to her vision. “You go past what you only know how to do yourself,” she said.

“It was an extraordinary experience,” Jenkins said. “We had such fun on it. She has a vision and it changes every day — and it should — you can talk to her and you have discussions about what things are, who we are, what are we doing. She discovers along with you. It’s an amazing experience.”

Unlike her Caméra d’Or-winning “Me and You and Everyone We Know” or “The Future,” July didn’t appear in front of the camera in “Kajillionaire.”

For Wood, whose performance is defined by a dramatic physical and personality transformation, that prospect was daunting at first.

“It was like, ‘O.K. cool, just one of the leads in the first Miranda July film she’s not in — no pressure, no shoes to fill,'” Wood said “She was on my list of people I was dying to work with so, this was really a dream … I had never read a script like that. I think being in something that’s a new idea or a new vision is a luxury these days and to be given a role like this in a piece so extraordinary was something special.”