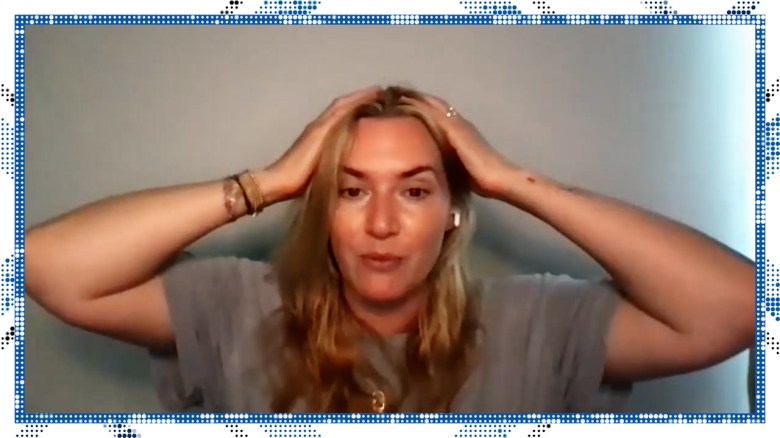 [Editor’s Note: The following interview contains spoilers for the entirety of “Mare of Easttown,” including the finale, “Sacrament.”]

“Mare of Easttown” is all about secrets so it should come as no surprise to hear that perhaps the best preparation Kate Winslet had for stepping into the shoes of Mare Sheehan came in the form of keeping a big secret from her children.

“I’m just so relieved that I don’t have to keep the secret about Ryan anymore,” Winslet said, her first observation in a post-finale interview with IndieWire. “I hadn’t even told my teenagers, my older kids were 17 and 20. I first read the script and, in particular, Episode 7 in June of 2018. I share everything about my job with my kids and they ask questions and they love it. Like, they’re really fascinated and they have cool, interesting things to say.”

“To have kept that from them was so hard. My husband had read everything, so the two of us would so often find ourselves literally having hushed discussions in, like, closets about Episode 7 because we couldn’t have the kids hear anything.”

The idea of trying to protect the kids from themselves is especially poignant given that so much of the drama at the heart of the HBO limited series comes down to those necessary moments when children slip from your grasp and make their own decisions, with consequences that can too easily be costly. That’s true for Ryan Ross, who was ultimately revealed to be the murderer in the case Mare spent the series attempting to solve, but also for Mare’s own son, whose mental illness led him to a place that she could not follow.

Her son’s suicide was a wound that Mare carried with her wherever she went, refusing to acknowledge it, refusing to let it heal. Like any choice in any person’s life, there were lots of reasons why the police investigator could not let herself grieve and Winslet held them all in her heart. In Episode 6, when Mare finally opens up to her therapist about her father, her son, and her own struggles with mental illness, the actress brought all the emotional bags she’d packed for herself on the journey.

In preparation, Winslet spoke at length with a long-time friend about their own loss of a loved one to suicide, with the friend advising her on connections and conflicts that they were left to untangle for years to come. Winslet also worked extensively with a grief counselor in preparation for the therapy scenes. It was, she said, a melting pot of influences swirling together to fill in the blank spaces she needed to ground her performance.

Angourie Rice and Kate Winslet in “Mare of Easttown”

“I had a backstory about how [Mare] was as a mother,” she said. “She had this very difficult child and she was embarrassed of this child. She says in Episode 2, to the pediatrician, that she had to check out after awhile because she just couldn’t cope.”

“So the extraordinary guilt that I knew this woman must have felt, that she had failed her son or had she done things differently, maybe he would not have killed himself. And for me, that was a driving force. The second she starts talking about what happened with therapist, it’s the beginning of the floodgates.”

But it wasn’t. Not really. Because Mare wasn’t the kind of character that would ever really give herself over to such an outpouring of emotion.

“So it was hard,” she said. “All of those scenes were really hard.”

Still, that wasn’t the only burden Mare was struggling with that required Winslet’s preparation; the loss of her son wasn’t the only wound that Mare had allowed to fester for years, it was just the latest. Perhaps her first, most poignant loss came with the death of her father — a father who also died of suicide.

Kate Winslet and Eisa Davis in “Mare of Easttown”

“She was a daddy’s girl,” Winslet said of the detailed backstory she created for Mare. “So much so that I felt that probably [her mother] was a little envious of the connection that her husband had with Mare, because she couldn’t relate to Mare in the same way.”

“And I decided that on the day that Mare’s father had killed himself, that she had found him and that actually they were going to a daddy and daughter’s dance at her school that day and she had a special outfit that she was going to wear and she was all excited to dress up in, and he chose that day to take his own life,” Winslet said. “And that left her with the feeling that she wasn’t enough. I had to create something as upsetting as that, that in the moment when she talks about it, it would trigger all this off the visual that I’d created. This little girl who probably didn’t even wear dresses very often and this dress that she had picked out for herself and was all excited to put on and proud to go to school, this dance with her dad. I had to create these agonizing things that I could rely on that were absolutely clear to me. They became little realities for me in the planning of this part.”

It’s a gut-wrenching disclosure, a worthy trigger for the pain vibrating under the surface throughout the scene but just one of many contributions behind the scenes that Winslet was making on the series, most of which had nothing to do with acting.

“Mare of Easttown” was the first time that the actress had committed herself to active executive producing, working in close cooperation with the show’s creator Brad Ingelsby and Craig Zobel, director of all seven episodes. With the production delayed due to the pandemic, much of the collaboration was done via messages, emails, and video meetings, with Winslet an active part of the conversation, unafraid to push back with her point of view during disagreements.

Winslet detailed one of these moments when the rest of the team opted to cut a scene from Episode 3 that would have the audience revisit the Carroll house for a vandalism incident, a moment that the actress felt was vital to keeping the location firmly within viewers field of vision, all the more important in the endgame when it becomes ground zero for Mare’s murder revelation.

It was a difference in opinion that eventually drew in HBO executives on a call that had Winslet begging them to listen, arguing that the scene has to stay and it has to be in Episode 3, before Mare is fired in Episode 4.

“And everyone totally listened,” she said. “It wasn’t in any way a standoff or anything. But there were moments like that when we all just had to remind ourselves what the original script said. And it was always a case of sticking to the original.”

Julianne Nicholson and Kate Winslet in “Mare of Easttown”

As if that weren’t enough, Winslet was also responsible for locking down Julianne Nicholson for the tortured role of Lori Ross, who through the course of the series finds out that her husband had an affair with his teenage first cousin once-removed and had a child with her, sparking Lori’s son Ryan to accidentally murder his second cousin. All the while, Lori remains Mare’s rock and best friend, even when she has to lie to protect her family.

But Winslet was already fully aware of how Nicholson functioned as a mother and a wife, largely due to the fact that the two women have known each other for ages.

Nicholson’s husband, actor Jonathan Cake was good friends with Winslet’s second husband, Academy Award-winning director Sam Mendes. Consequently, Winslet was present at Nicholson and Cake’s wedding. She held Nicholson’s son in her arms when he was less than 24 hours old. The women had real and meaningful connections that bound them, just as Mare and Lori did, intimacy that cannot be bluffed.

“I just could never imagine anyone else but Julianne playing Laurie,” Winslet said. “I love her as an actress. She has a very unique quality and she has a look about her. There’s a translucency to her skin that I just find mesmerizing to watch combined with her beautiful sleight of hand when it comes to performance work. And I just felt that there’s a gentleness to her as a person and as a mother that I’ve seen myself that I absolutely knew we needed for Laurie. What I didn’t know was how hard it was going to be to actually get her to say yes —not because she didn’t love the character because she did — but because she has two children. And a husband who’s an actor. And she lives in California.”

Before Nicholson could make a decision, Winslet had to come clean. Nicholson wanted to say yes. She wanted to dive into the role but there was just one, niggling concern that was weighing her down. She needed to know what happened in Episode 7.

“I remember her saying to me, ‘Listen, I I really want to do this. But I just need to know what happens. Can you just slip me the script or just tell me?’ and I said to her, ‘I I can’t. I mustn’t. I mustn’t. But if you don’t say yes to playing this part, I think I can promise you that you are going to regret it.'”

That was enough for Nicholson, secrets be damned.

“She was like ‘OK, I’m in,'” Winslet said. “So she said yes without reading [Episode 7]. I just can’t believe it. I can’t believe we got her. And yeah, I just felt so connected to her in every single thing we had together. “There was an inherent trust and inbuilt history. It was it was so special to look into those beautiful pale green eyes of hers and and to act with her was so special.”

“Mare of Easttown” is available now via HBO Max.