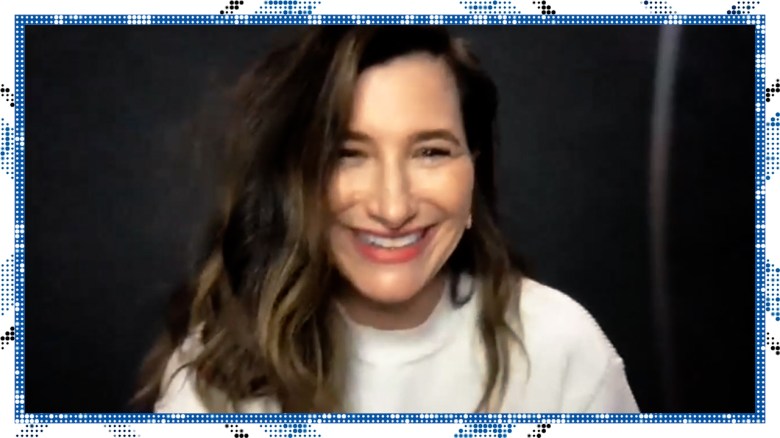 Like so many Broadway fans, Kathryn Hahn misses the theater. But unlike many of her stage-starved peers, this actor got a taste of live performance before it was too late — with a bit of magic, of course.

With the pandemic shuttering productions for more than a year and “WandaVision” taking up her time prior to the shutdown, Hahn still found herself among a living, breathing audience, bursting through stage doors, and cracking jokes met with spontaneous laughter thanks to… a TV show about superheroes?

Yes, “Filmed Before a Live Studio Audience,” the title of “WandaVision” Episode 1, was actually filmed before a live studio audience. Not only that, but producers of the Disney+ series took their immersion into classic sitcoms even further by dressing not only the set, but everything around the set in period appropriate garb.

Built as an homage to 1950s television, the entry was shot in black-and-white with a 4:3 aspect ratio and era-specific lenses. All those touches helped keep everyone focused on the throwback sitcom they were trying to create, which proved their worth when certain story beats felt like too big of a swing for contemporary viewers.

“The fact that Jac [Schaeffer] wrote a script where so many of the jokes were period specific, unironic, and earnest, I wondered if this was an experiment where they’d have to put in a laugh track because I don’t know if an actual [modern] audience is going to find it that charming,” Hahn said. “But when it started and I was backstage, I heard Lizzie and Paul get those laughs, I was so moved by it — that they landed the way they did.”

The communal celebration of her fellow actors didn’t come about automatically; it was one more consideration made by the production to help capture their tricky, time-hopping tale. Hahn said the “WandaVision” cast was given weeks of rehearsals before shooting to help hone their characters and chemistry.

“[That was] something I did not anticipate,” Hahn said of the extra time. “You usually do not have that opportunity, so it really felt like a theater ensemble, like a theater troupe, by the time we got to make it.”

The connection stuck, quickly and with great resonance. Actors who weren’t part of the first episode were invited to join the live audience, including Teyonah Parris, who Hahn remembered “cheering us on” as the shooting progressed.

“There was just a buoyancy to the making of [that episode],” Hahn said. “I’ll never forget it.

Most viewers, from the live audience or watching at home, would say the same thing about Hahn’s performance. As the nosy neighbor Agnes, who later reveals herself as the centuries-old witch Agatha Harkness, Hahn got to play a character who was always playing another character — or two. Agatha pretended to be Agnes, who pretended to be whatever character Wanda (Elizabeth Olsen) needed her to be, as the Scarlet Witch jumped through TV history, one decade at a time.

“There’s something very meta about the whole thing,” Hahn said. “I was able to, in effect, play an actor. I was able to have the freedom of really playing different parts.”

Fans couldn’t get enough of Agnes, Agatha, or anyone in between, so long as Hahn was pulling their strings. Whether in her charming fourth-wall breaks or studied cadence of old-fashioned zingers, Hahn found just the right emphasis on every word. Her exaggerated gestures helped build curiosity around her character — as if the real “Agnes” was always bursting to get out — and by the time Agatha was unveiled, it only felt appropriate that she get to do it in song.

Still, among all the high-wire VFX and wild witch moves (“My kids walked in on me practicing my witch moves once, and they were horrified by me — as if I was on the toilet,” Hahn said), Hahn never lost her grip on Agatha.

“Whether it’s a green-screen behind you and whether there’s wires, even if you’re in the most natural, independent, teeniest project, you still have to pretend that there’s not a boom right there and there’s not a camera in your face,” Hahn said. “So it’s just the same. It’s using your imagination, and this was able to stretch it to a place of play that was just fun.”

That fun couldn’t have come at a better time, either. In addition to the daunting state of the world circa late 2019 and throughout 2020, Hahn had recently worked on intimate and intense projects like HBO’s 2020 limited series “I Know This Much Is True” and the 2018 Netflix drama “Private Life.”

“I had just been coming off some hard stuff, emotionally,” she said. “There was a run of stuff that I’d done that had a lot of emotional labor, so there was something really cathartic about being able to be this big and powerful, which is something I don’t feel in my real life. I’m very grateful to Agatha for that.”

For that, and for the live audience. Hahn credits shooting that live episode with helping to find Agatha’s role in the series, as well as her own role among the ensemble. Knowing right off the bat that what they were doing was working provided the same kind of trust she found in her castmates; the same kind of appreciation we all feel when a piece of art reaches out and grabs us, holds us, and comforts us.

“I miss live theater so much,” she said. “There is a sort of communion that happens between the audience and the actors. Energetically, it doesn’t feel so much in a vacuum.”

Thankfully, for nine episodes, Hahn helped all of us feel that connection again.

For more from Hahn on the show’s “Scrooge Episode,” her secret-keeping skills, and which of her past sitcoms she’s recommend for Wanda’s grieving process, watch the full video interview above. “WandaVision” is available to stream on Disney+. Kathryn Hahn is eligible for Best Supporting Actress in a Limited Series at the 2021 Primetime Emmy Awards.