By IndieWire Staff and Marcus Jones 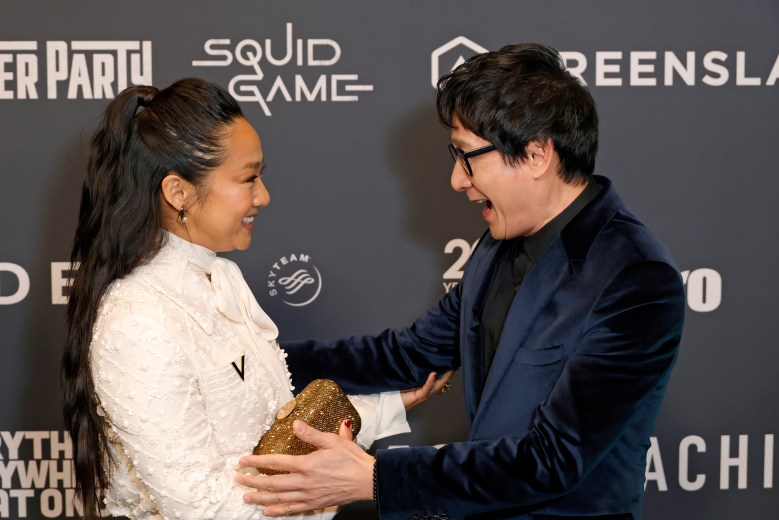 “Everything Everywhere All at Once” star Stephanie Hsu would like to take the opportunity to dispel one myth that has perpetuated about the breakout multiversal dramedy written and directed by Daniel Kwan and Daniel Scheinert (AKA Daniels), that has now become A24’s most successful film at the box office.

“Yes, most of the script was scripted,” said the Best Supporting Actress contender to IndieWire, in reference to the idea that there is little difference between what was in the script and what made it to the screen. But when it came to her character, a supernaturally defiant daughter driven by resentment toward her disapproving mother, “we really let Jobu let her hair down per se, and unleash chaos. And, in fact, Daniels would often tell me, ‘OK, we’re doing Jobu now. Just mess up the whole thing. … Break the movie.’”

For IndieWire’s final Awards Spotlight of the Winter 2023 season, Hsu and co-star Ke Huy Quan talked about the familial bonds at the core of the zany, inventive, heartrending Michelle Yeoh vehicle, and the unexpected ways it has resonated with filmgoers of all backgrounds.

Speaking to the development of his character Waymond Wang, who at once plays a passive role in the story, as a loving husband who just wants to recapture the attention of his at-sea wife Evelyn (Yeoh), and also is the catalyst for her across the multiverse journey toward self-discovery, Quan said, “One of the things that was really important to me, was that the audience is able to distinguish these three different versions [of Waymond] just based on how he stands, he sits, he walks, how he moves.”

Ke Huy Quan in “Everything Everywhere All at Once”

The former “Goonies” star, who had taken a near-30-year break from acting in reaction to the dearth of good roles available to him, but is now a Best Supporting Actor frontrunner, said to prepare himself for his grand return to the silver screen, he hired various coaches, including one for dialogue (“I haven’t spoken written dialogue in a long time”). A movement coach was also key to finding a way for the audience to determine which Waymond they are seeing at any given time. “They kind of move a little differently. I hope the audience can just distinguish which version they are,” the actor said.

With her characters Joy and Jobu, Hsu’s task with Daniels was to convey “how nihilism would manifest in a villain who was so powerful that she almost didn’t care how powerful she was,” said the actress. “My favorite thing that we created in the room and in filming was we created this shorthand of a third character called Joy-bu, and that was a combination of Joy and Jobu. And so we would do scenes that were perhaps written clearly as Jobu, but then we would do it again, do another take as this third entity, Joy-bu, which to me, is the very core essence of that character’s throughline because she is both the daughter and the villain and just the daughter at the end.”

Going back again to the reality of how Jobu was actually transferred from script to screen, she said, “It’s a testament also still to Daniels because the bones of the script are there. But specifically with Jobu they gave me so much rein to completely surprise not only them, but myself.”

Though “Everything Everywhere All at Once” centers their characters’ individual relationships to Yeoh’s Evelyn, Hsu and Quan had an important implicit understanding of Joy and Waymond’s relationship.

“He’s always there for her. He’s always supporting her. That’s how he is and that’s why he’s able to give that powerful speech at the third act of [the] movie, to be kind. And that’s who Waymond is,” said the actor.

“It can almost become frustrating when your father or your parent doesn’t understand the depths of your sadness. But as we, of course, learn in Waymond’s journey, it’s how he chooses to fight,” responded Hsu. “It’s not because he’s naive, it’s a choice; a conscious choice he has made to also keep the family together. And I do feel like I remember filming and feeling genuinely supported by Waymond’s love. Obviously because of Ke’s extraordinary performance.”

Though the project was something both stars truly believed in artistically, the huge commercial success of “Everything Everywhere All at Once” and its awards season staying power did not necessarily cross Hsu and Quan’s minds while making the film.

“Everything Everywhere All at Once”

“I kept thinking if our movie would make our money back, I will be so grateful already, because A24 or another movie company can see that ‘Oh, this is doable.’ And then they would greenlight more stories like this,” said the actor. “It is so important that it’s centered around a Chinese family, but it somehow transcends identity politics and becomes a universal story about just a family,” said the actress, hitting on how the film has found universal appeal in its specificity.

“We have all groups of people, all colors of people, all walks of life come up, and when they talk about our movie, I mean, it really resonated with them,” said Quan. “They would cry in the middle of the conversation about how much our movie has impacted them, impacted their life, and how it’s changed their life. That is something that we did not expect.”

Hsu sees the continued success of “Everything Everywhere All at Once” as not just a win for the cast and crew, or a win for A24, but a win for theatrical releases in general. “I just want movies to never die. I just want us to keep making things that bring us closer together and help us process what continues to be a very complicated, confusing existence,” said the actress. “And I hope that what our film has done has shaken up the industry just a little bit so that no one can ever say again that an indie film can’t make it in the box office or make a huge impact. People still want to go to the movie theaters. People still want to be together and feel something.”

Watch the full discussion between Quan and Hsu above.

“Everything Everywhere All at Once” is now available to stream across digital platforms.