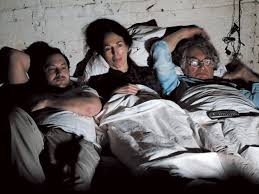 Azazel Jacobs has generated acclaim on the festival circuit for over a decade, including his 2008 Sundance hit “Momma’s Man,” which features his real-life parents, Ken and Flo. But Ken Jacobs’ own filmmaking legacy goes back much further than his son: The New York avant-garde legend has been making visually entrancing experimental works for 60 years, using light and color to simulate 3D effects long before computers came along. Later this year, Kino Lorber will release a restoration of Jacobs’ films on DVD and Blu-ray, while his son’s “Momma’s Man” and “The Goodtimes Kid” will be available from the same distributor in the months ahead.
Meanwhile, Ken Jacobs turned 87 this past week, and his son decided to interview his father for the occasion. Watch their discussion above, where they touch on their mutual affinity for the movie camera, Ken Jacobs’ new “Eternalisms” experiments, and his affinity for ’30s era Hollywood films. Below, Azazel Jacobs provides some context to his relationship to his father’s movies.
One of my earliest childhood memories is of watching one of my father’s films in a theater when an old man in the audience suddenly stood up and, in the light of the projector, yelled, “What is the meaning of this, Mr. Jacobs?!” I’m sure I shrunk in my chair then, but as I continued to watch my father’s films, that question, and the man’s anger, mystified me.
Maybe because I had been watching his films simultaneously with “Sesame Street,” and they felt part of the same, impossible world, I was always able to find a narrative if I wanted to. His films were no more anarchic than the Fleischer Brothers’ cartoons my parents were also showing me. As I grew and continued watching, wanting to become an artist myself, the answer to this man’s question seemed obvious: it was up to the viewer to discover a film’s meaning. This meant work, active watching, going along with illusions of depth, finding beauty in sometimes nightmarish visions, and vice versa. Play amongst the rubble. But, if one is up for it, a film’s meaning will be as individual and personal to you as the work itself. In my eyes, this is the most generous gift of art.
I am a very different filmmaker than my father, but I believe we share some similar interests. We are equally fascinated with how humans and objects interact, what shifts over time, a sense of layers and movement even while stuck in place. And, while I don’t think of myself as a “Mr. Jacobs,” the man’s question still lingers, not so much for me to answer, but to keep asking.