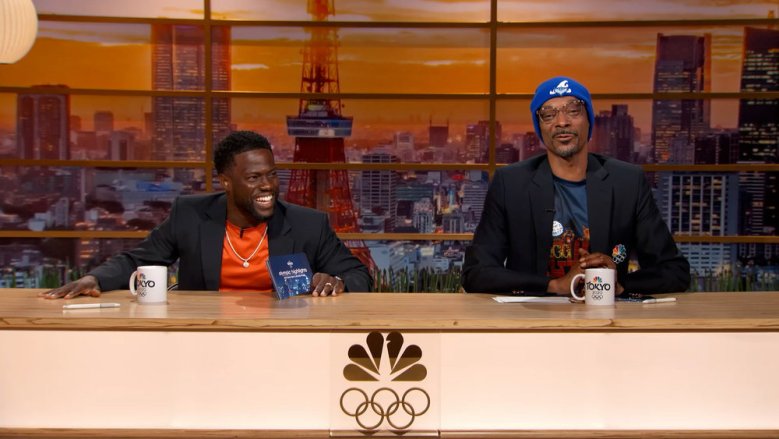 The 2020 Summer Olympics, as held in Tokyo in 2021, have been something of a mess. The (ongoing) global health crisis already delayed the Games for a year and additionally forced restrictions that meant athletes would be competing in empty arenas and stadiums. But beyond that, NBC’s coverage of the Tokyo Olympics has been scattershot, with a dependence upon prefab narratives and storytelling devices that, during this unpredictable time, are unable to capture the fluid excitement of competition.

Which doesn’t even begin to address the underwhelming incorporation of the conglomerate’s streaming service Peacock into its Olympic push.

And yet squirreled away on Peacock is the hidden gem of the Tokyo Olympics, the sole saving grace of a slate of broadcasting bummers: “Olympic Highlights with Kevin Hart and Snoop Dogg.”

The buzz about the series — at least within IndieWire’s virtual headquarters — began with a tweet.

If you love watching the Olympics as much as I do, your experience is not complete without the Snoop/Kevin Hart highlight show. It’s not only hilarious, they’re GREAT interviewers. Why isn’t Peacock promoting this more?

From there it was just a matter of checking out the generically titled, half-hour show. And as happens all the time, in every single situation, Twitter was right on the money! Whether you’re a fan of Kevin Hart or not, his pairing with the always effortlessly cool Snoop Dogg is low-key genius, with Hart’s high-strung energy and Snoop’s laid-back vibe forming the perfect hybrid strain of sports entertainment.

Basically, the show is as good as not advertised and proof positive that NBC has lost its grasp on what people want from the Olympics.

Take the title of the series for starters: “Olympic Highlights with Kevin Hart and Snoop Dogg.” Well, that’s definitely the exact phrase someone scribbled on the whiteboard during the Olympics coverage pitch meeting and was apparently never revisited. If you were wondering, a Google search for the phrase “olympic highlights” yields a mere 518 million results so keyword optimization wasn’t exactly a priority.

Not to mention the fact that they don’t even set off the high in highlights, which is bizarre because Snoop is a legendary proponent of marijuana — so much so that he even has his own brand of cannabis (Leafs by Snoop.) And… nothing? No cheeky humor about getting baked and watching elite feats of athleticism? It’s certainly not a content issue, as both Hart and Snoop swear freely during episodes, often to hilarious effect.

But more than wordplay, the most offensive thing about the lack of promotion for “Olympic Highlights” is that it’s really good. While Hart is a solid comedic presence, it’s Snoop that’s the real star of his show. He’s no stranger to hosting, what with his VH1 variety show with Martha Stewart, “Martha and Snoop’s Potluck Dinner Party,” and Snoop acquits himself well to the anchor chair, quick with a quip and more than ready to exhibit real enthusiasm over the featured clips from the Olympics. The man is smooth as hell.

Also key: It’s not just “SportsCenter” style banter that the pair are bringing to the table. On the episode from August 4, they spoke with women’s shot put silver medalist Raven Saunders, who sparked controversy by lifting her arms above her head in an X during the medal ceremony, which according to Saunders represented “the intersection of where all people who are oppressed meet.”

Saunders has been outspoken about her battles with mental illness, as well as struggling to find her place in the world as an openly queer Black woman competing on the world stage. Snoop’s admiration of both Saunders’ accomplishments and her earnestness was clear, and it was really special to see honest engagement about issues of intersectionality be discussed on such a prominent platform.

NBC and Peacock have something really special in “Olympic Highlights with Kevin Hart and Snoop Dogg.” It’s just too bad they don’t realize it.

For more on the shortcomings of this year’s Olympics coverage check out this piece from IndieWire’s Steve Greene.

And for more about an underperforming platform in Peacock, tune in to this week’s episode of IndieWire’s TV podcast “Millions of Screens” with Deputy TV Editor Ben Travers, Creative Producer Leo Garcia, and TV Awards Editor Libby Hill, plus even more raving about the unexpected pleasures in “Olympic Highlights.” Then stay tuned as the gang dissects Mike White’s HBO series “The White Lotus” on which the trio has a variety of opinions.