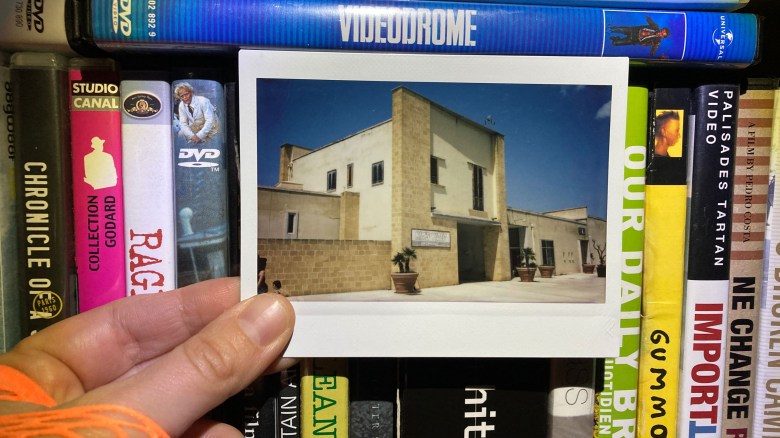 How did the greatest VHS collection in Manhattan relocate to Salemi, Italy? And more importantly, why?

Documentarian filmmakers David Redmon and Ashley Sabin set out to discover the truth behind famed Kim’s Video founder Youngman Kim’s decision to sell his expansive collection to the town of Salemi in Sicily.

During the IndieWire Studio at Sundance, presented by Dropbox, IndieWire executive managing editor Christian Blauvelt discussed the elusive motivations as to why Mr. Kim opted to outsource his collection internationally.

“I’d be very curious what he would have to say today,” director Redmon said. “But at that time in his life…He told us several different answers. He liked the fact that Salemi did not have access to video store culture within, what he said, a hundred-mile radius. So he wanted to give an opportunity to a town to experience this collection and create this interesting love of cinema. So this is one motivation he had, this is why he donated the collection to Salemi. They promised to develop an artists’ colony with Kim’s Video at the center.”

“It was this experience of bumping into something physical and finding that thing that is both exciting and I think, also important to expand our vocabulary of what it could possibly be,” Sabin said of visiting the original Kim’s Video location.

Co-director Redmon added, “There’s these ghosts all around myself and Ashley carrying us to find the collection, to direct our attention to certain places so we could learn more information about what happened to Kim’s Video. It’s not so much human motivation, it was kind of intuitive direction that was given to us and we just had to listen and follow.”

The collection was found to be neglected in Salemi, with Redmon and Sabin being instrumental to take back the DVDs and VHS tapes. The collection is now currently housed at Alamo Drafthouse in the Financial District of Manhattan, returning stateside once again.

As IndieWire’s Eric Kohn reported in April 2022, “Kim’s Video” documentarian Redmon helped facilitate the partnership with the Drafthouse. Renamed Kim’s Underground, the space is free of charge for theatergoers and visitors alike to rent films. The mayor of Salemi attended the official opening event to celebrate Kim’s collection returning stateside. Kim mandated that the Drafthouse house all 55,000 titles in the collection and make at least 3,000 available to the public at the time.

“If I were to no longer offer the video store like I am, I suppose the cycle could continue and I could be the next Salemi,” Alamo Drafthouse founder Tim League told IndieWire. “We’re in the service of Mr. Kim. We have a contract to uphold in terms of bringing this collection back to the city. If I fail on my terms, he has a right to take it back.”

Kim added, “The collection was really built by the recommendations from customers and friends, not only from my own tastes. Everybody agrees that we had a very unusual kind of collection. It’s a public asset.”

IndieWire critic David Ehrlich penned in the review of the documentary, “As Karina Longworth memorably wrote about for the Village Voice, the town of Salemi was desperate for a PR win in the aftermath of a terrible earthquake, and some imaginative official decided that housing one of the world’s largest film libraries would be a fun hook. The deal was that Salemi would project the DVD collection in a micro-cinema 24 hours a day and provide free accommodations for Kim’s Video members who bothered to make the trip.”

Ehrlich continued, “But when Redmon goes to Italy in search of his flickering old friends — adopting a pushy attitude that instantly rankles the local Salemi bureaucrats (who seem to be unfamiliar with the American credo that the customer is always right) — he finds that the library’s caretakers aren’t keeping up their end of the bargain. The movies are randomly piled inside a damp and moldy building, many warped by water damage and all of them suffering from years of neglect. That’s when Redmon takes it upon himself to find the people responsible, liberate the collection, and restore the tapes and discs to their elusive rightful owner….If the cinema is a boundless cemetery of lost time, then the corrupt bureaucrats of Salemi (and the streaming business they effectively represent) are some of its strangest grave robbers; the touching final moments of ‘Kim’s Video’ affirm those truths not just by rescuing Mr. Kim’s storied collection, but also by adding a new film to it.”