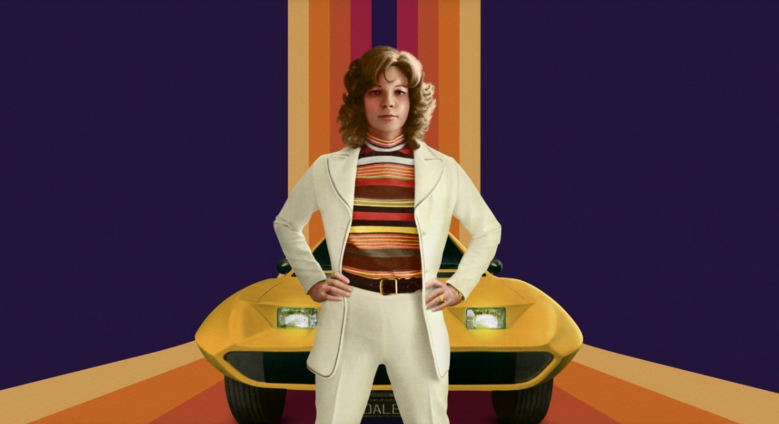 When Nick Cammilleri pitched Jay Duplass with almost 10 years of painstaking research and interviews on the first woman to head a car company in the competitive 1970s auto market, he was surprised he had never heard of Liz Carmichael. From 1974-1975, when Liz introduced her flashy yellow three-wheeler The Dale to the world, she became a subject of national fascination: Initially for her bold business ideas and then, once she was non-consensually outed by an obsessive TV reporter named Dick Carlson, the fact that she was transgender.

That’s just the tip of the iceberg when it comes to Liz Carmichael’s improbable adventure of a life which, until HBO Max began airing “The Lady and The Dale” in January, was only recorded via confidential FBI files and a 1989 episode of “Unsolved Mysteries.”

Cammilleri had been compiling a massive archive since 2011, but most of his sources viewed Liz merely as a grifter who transitioned only as a disguise to dodge counterfeiting charges. All the contemporaneous reporting on Liz used her birth name and misgendered her, even though she continuously asserted her trans identity throughout a highly publicized trial and lived as a woman until her death in 2004.

Once he took on the project as executive producer, Duplass knew he needed a trans creative to parse out truth from fiction; to divorce Liz’s con artist story from her trans identity. He called up Zackary Drucker, a former consulting producer on “Transparent” with a deep well of knowledge about trans history and media, who then came on as co-director with Camilleri.

“Part of the impetus to bring Zackary along, not only as a trans historian, but as someone who could help situate this story appropriately culturally, [was] to help us move the culture forward,” Duplass said during the above video interview.

They were both surprised to learn that Drucker had never heard of Liz, either.

“I wonder if the claim that she was a man masquerading as a woman to commit fraud was so persistent that even trans people didn’t know that she lived as a trans woman,” Drucker said. “It would be so easy to come to that conclusion about her if you only knew about ‘Unsolved Mysteries’ or the media that existed of her.”

She admits she had reservations at first, when there are so many beloved trans figures who have yet to receive a glossy documentary treatment.

“At first I wondered — ‘Why this story? Why Liz’s story?’ — that was my first instinct. As trans and gender expansive people we all have our own shortlist of heroes and people we admire,” she said. “I had to come to my own understanding of why Liz’s story is so prescient today, how the themes of her life continue to persist in 2021, and that ultimately her story is kind of this inciting moment or microcosm of what’s become a national conversation.”

All those themes come to light in the fourth and final episode, “Celestial Bodies,” which reveals that Dick Carlson, the bloviating TV reporter who had it out for Liz from the start, is the father of Fox News anchor Tucker Carlson. A dizzying montage traces the thread of the Carlsons’ bigotry, as footage of the ruddy-faced blowhards spouting transphobic rhetoric bleeds into a piercing void.

The interviews with Carlson and others take on a new tenor, imagining Drucker sitting behind the camera, listening to sources who repeatedly misgender Liz and disrespect trans people. Luckily, she wasn’t there for sessions with Carlson, who didn’t agree to re-shoot Cammilleri’s 2016 interviews, but there were plenty of others who didn’t even make final cut.

“There was one interview in which I was actually crying behind the camera. I was having a day already, and the subject just went on a transphobic tear, not even about Liz but about trans people…this long tired [rant] out of left field. We actually thought he was a very sympathetic character up until that point,” she said. “It was so astounding the things people said on camera, and we were very sparing with it, truthfully, because we had to maintain good guys.”

“We had had a lot of discussions about what are we gonna allow people to say within our own documentary series but that’s yet another reason why we deputized Zackary to lead. And she told me, ‘We have to tell the truth,'” Duplass added. “We tried to ride a line between not shying away from the truth but also not overdoing it. We didn’t want to trigger people, but I’m just proud of where Zackary landed with it.”

“The Lady and the Dale” airs its fourth and final episode on HBO Max on February 14 at 9 p.m. ET.

This Article is related to: Television and tagged Direct, HBO Max, The Lady and the Dale, Video