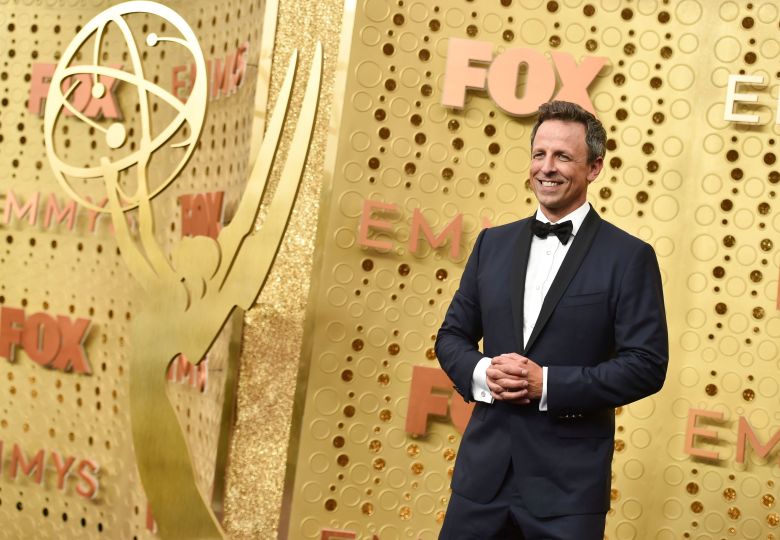 It turns out that running a late night talk show from your attic isn’t as simple as it looks.

It’s been three and a half months since NBC’s “Late Night with Seth Meyers” left the cozy confines of Studio 8G at 30 Rockefeller Plaza and relocated to Meyers’ own abode, due to coronavirus health and safety measures enacted both across the country and abroad. The first episodes had a kind of low-fi charm to them, as Meyers attempted to find a set-up conducive to self-recording a broadcast television show, trying a hallway and a garage before finally landing in his attic, where now, as they say, the magic happens.

“My job was just to tell as many jokes on camera and make sure I was recording both sound and video,” Meyers told IndieWire in a recent interview,  “and I’ve done pretty decent ticking those two boxes, but it has been a weird challenge. There are times — I know, it’s weird to say because these are such awful times — that it’s a little exhilarating, knowing that you’re doing a show more by yourself than you ever had any intention to.”

“And I’ve been really happy our writing staff has really risen to the occasion. Where the hair, makeup, and wardrobe are far below the standard I’m accustomed to, the jokes have been right where I like them.”

Meyers’ hair, it must be said, has grown disconcertingly long during social isolation, so much so that his part has switched sides, as though “Late Night” is now hosted by an alternate universe Meyers, who teaches junior high science and whose luxurious hair and plaid shirts leave his students starry-eyed.

To watch “Late Night” in recent months is to see the host grow increasingly comfortable with the show’s temporary new home in his attic, with recurring bits developing, much to the delight of audiences. There’s the ever-changing book stack that sits on a nearby table, often featuring great works of modern fiction, including “White Teeth” by Zadie Smith, “The Underground Railroad” by Colson Whitehead, and “A Clockwork Orange” by Anthony Burgess and, of course, “The Thorn Birds” by Colleen McCullough, which has spurred its own separate bit.

There’s also the wasps that are definitely not murder hornets that utilize the attic as a co-working space with Meyers, plus a tiny magic door that has been known to secret children, Ethan Hawke, and, who knows, maybe some sort of primordial creature slumbering in a forever sleep on the verge of waking.

For his part, Meyers delights in the recurring jokes, saying that it’s really fun to not have an audience to tell you, “Stop doing this.”

It would seem, in fact, that the “Late Night” audience has only grown since they’ve taken the show, metaphorically, on the road. According to ListenFirst Media Brand Rankings, season-to-date the show has seen the largest growth of YouTube viewing of any late-night talk series, spiking 70 percent in YouTube viewing as compared to the same period last year. What’s more, the show’s signature segment “A Closer Look” is averaging 3.3 million YouTube views per installment, accounting for nearly 60 percent of the show’s new YouTube views.

What was first a concern for the comedian, the lack of audience has morphed into a peculiar type of freedom. “I’ll be like a cactus sucking up water of an audience when I see it, but it’s been really liberating to just do jokes at the speed you want to do them, not worrying about having to pause for lunch, or to be thrown by the absence of laughs,” he said. “The show has a weird momentum that it didn’t have in the studio. I don’t want to acquire it as the only taste that satisfies me, but it has been an interesting experiment.”

While it’s been an adjustment to work without the immediate gratification of a live, studio audience, the isolation has provided an unexpected benefit, particularly with regards to interviews which now take place over Zoom and lack the immediate intimacy and chemistry provided by being in the same room with the person you’re interviewing.

“The most interesting thing that happened was, as the world went through this upheaval, there were a lot of voices that maybe weren’t historically on late night shows who found their way on and it was nice not to have the pressure of an audience,” Meyers said. “Knowing that you’re going to talk about some heavy stuff in a way that’s really rewarding and to not have that comedian part of your brain wondering, ‘Is this okay? Nobody’s laughing. This is good, right? Because if they were laughing, that would be bad.'”

“And so, it’s a weird thing to say, it’s had an upside. But I think that there have been times where I’ve been talking to somebody about things where I felt, oh, this is by far the best way to get this message across.”

Meyers is good about finding the small bright spots in a year that has seemed so dire, which includes him finding new and different ways to appreciate the efforts of the staff and crew of “Late Night.” “Their excellence and their professionalism spares you so many things to think about and things I don’t want to think about and things I didn’t get into comedy ever thinking I would have to think about and they do it in a way that’s just sort of invisible,” Meyers said of his team. “And so unfortunately, you don’t appreciate it until they go away. And it will be, such a relief to see them again. I also, you know, genuinely just miss their company. It’s been a great group of people to be around.”

Check out the video above for more on “Late Night” bits and the long road to the 2020 election.

This Article is related to: Awards and tagged Consider This, Direct, Late Night with Seth Meyers, Seth Meyers, Video