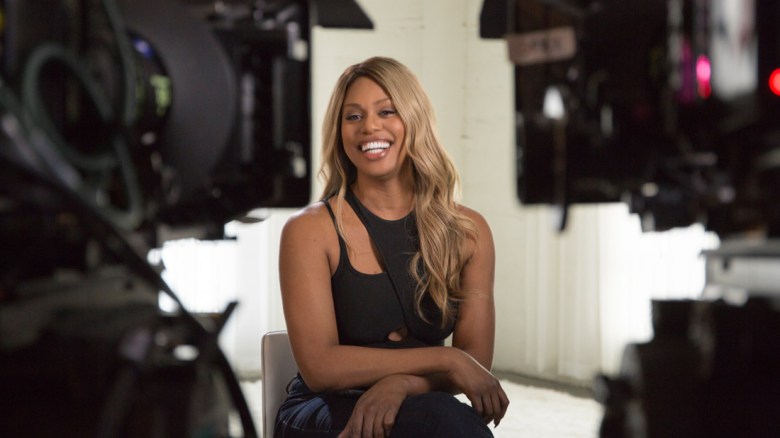 When “The Celluloid Closet” came out in 1995, the trans liberation movement was still in its nascent stages. It would be years before LGBTQ+ became preferred nomenclature, and the queer rights movement would fully embrace the transgender community. Based on Vito Russo’s eponymous 1981 book, “The Celluloid Closet” charts the history of LGBTQ representation in film and TV, from dying lesbians in “The Children’s Hour” to the trans psycho killer in “The Silence of the Lambs.”

Just as the transgender rights movement has lately found a voice separate from mainstream gay causes, so too does trans representation deserve its very own placement in the history of cinema.

Enter “Disclosure: Trans Lives on Screen,” a new Netflix documentary from an almost exclusively transgender creative team, cast, and crew. Directed by Sam Feder and executive produced by Laverne Cox, “Disclosure” plays like a beautiful epilogue to “The Celluloid Closet,” though it stands entirely on its own. The film gives trans representation the full consideration it deserves, offering a fascinating excavation of an often painful history with moments of levity and personal reflection. Each touchstone is filtered through the lens of the interviewees, all of whom are trans. The simple pleasure of viewing a film with an entirely trans cast is nothing short of revelatory, making “Disclosure” another positive entry into the very history it is seeking to rewrite.

“There are all these different ways of looking,” Cox said in a recent video interview with IndieWire (available above). “I think about the cis-normative gaze, the heteronormative gaze, the white supremacist gaze. … So to prioritize and center trans spectatorship feels so — I will never not be endlessly excited about the fact that our film does that in such a profoundly beautiful way.”

While certain problematic milestones like “The Silence of the Lambs,” “The Crying Game,” and “Soapdish” were always going to be in the film, Feder let the interviews guide much of the content.

Sam Feder on the set of “Disclosure: Trans Lives on Screen”

“Laverne and I spent so many hours doing research and talking about what we thought were touchstones,” said Feder. “Having that in dialogue with the personal anecdotes from our interviews really solidified how to tell the story. We went with what resonated with the interviews, the touchstones we saw historically both on and off the screen, and the natural progression of people’s memories.”

In the film, the actress and writer Jen Richards tells a painful story of a friend bringing up “Silence of the Lambs” when she came out. Actress and filmmaker Rain Valdez tells a similar story about watching “Soapdish” with her family as a kid. Cox admits she still loves “Soapdish,” even though it’s a classic examples of the trans deception trope, as Cathy Moriarty’s character is revealed to be transgender in an extremely painful and unnecessary finale.

“I just love that film, and what happens at the end is like, I hadn’t even allow myself to process it,” said Cox. “I was so accustomed to trans people being made fun of on camera … it was such a part of the standard curriculum, that I didn’t question it the first hundred times I saw the movie.”

The subjects in “Disclosure” are able to discuss these harmful moments in film history while also holding the complexity that many facilitated early moments of self-recognition. This question is at the heart of “Disclosure,” and one Feder handled with subtlety and care.

“How do we love critically, how do we hold complex ideas? It seems like there’s this notion that we’ll feel more comfortable if ideas are simplified, where actually I think that brings more dissonance than being able to hold the complexity and the nuance of ideas,” Feder said.

One of the unexpected high points in the film is undoubtedly Cox’s identification with Barbra Streisand in “Yentl.” An avid Streisand fan, her perspective on the film is a beautiful example of how different lenses can enhance our understanding of classic cinema.

“Here was Yentl, a woman, a girl, who had to pretend to be a boy or a man to become a Rabbi, and falls in love with this guy and wants him to see the woman that she is, but he only sees the man that she is presenting,” said Cox. “And that just felt like me, I was like — ‘that’s me.’ I didn’t have words for it and I didn’t fully understand why, but that’s what it was.”

The film’s more theoretical analysis comes from film historian Susan Stryker and filmmaker Yance Ford, who discuss D.W. Griffith’s “Judith of Bethulia” as well as “Birth of a Nation.” Placing the history of trans cinema against the history of Black cinema is a fascinating intersection of the mainstream narrative as it has been entirely framed by a patriarchal, cis-normative, and white gaze. Still, these early moments in film history must be grappled with if we are to understand how to create new images.

“When we can watch critically and be willing to look at ourselves and the ways in which these images unconsciously influenced how we think about ourselves and each other, then we can do the consciousness-raising work that will then say — ‘this is no longer acceptable,'” Cox said. “Because hopefully this consciousness-raising will allow us to see the humanity and understand the extent to which we’ve been programed to dehumanize based on images we’ve seen on television and in our media.”

This Article is related to: Film and tagged Direct, Disclosure, Laverne Cox