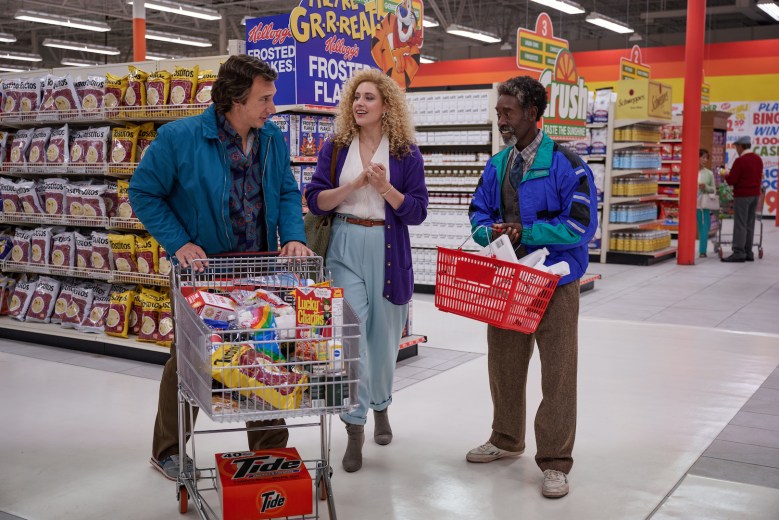 LCD Soundsystem hasn’t been able to fulfill many of the usual awards chores this season, thanks to the electronic band’s recently wrapped, 20-show residency at Brooklyn Steel in New York. However, frontman James Murphy and his collaborators Nancy Whang and Pat Mahoney do have an Oscar contender on their hands with “New Body Rhumba,” the ’80s glam-inspired coda for Noah Baumbach’s “White Noise.” The song — which sounds like anything out of the band’s catalog of dance-punk anthems — accompanies a choreographed dance sequence at the movie’s end where, echoing the conclusion of Don DeLillo’s 1985 postmodern novel, the characters have accepted the specter of death, so now what?

“The first part of the movie is about just daily life, the things that we do that distract us from fear of death, and part two is Death comes for us. Can we go about life the same way we did? Can we go back to the supermarket and shop the same way we did before, which is this notion of these different rituals and these things that we do every day,” director Baumbach said in the exclusive video featurette above. The Oscar-nominated “Marriage Story” filmmaker, here directing Adam Driver and his partner Greta Gerwig, previously worked with composer James Murphy on the films “Greenberg” and “While We’re Young.”

“There’s a lot of music that came out in the ’80s and around the time of that book that I love,” James Murphy said. “I like working with Noah because the way I look at it, if Noah and I were in college, and Noah was making a movie, and I had a little recording setup in my dorm room, I’d be like, ‘Do you need some music? I can make some music for you.'”

He added, “It was pretty early when he wanted the song. I said, ‘Absolutely.’ Plenty of time. Yet I was still quite late in delivering it. Like almost a year. We sat down, and I made the basic principle of the song in about five minutes. The first half is like a glam bass riff with synthesizers making noise over it. Then, once I sing over it, I did change the arrangement, and that just takes a long time.”

“White Noise” is now in select theaters but will stream on Netflix December 30.