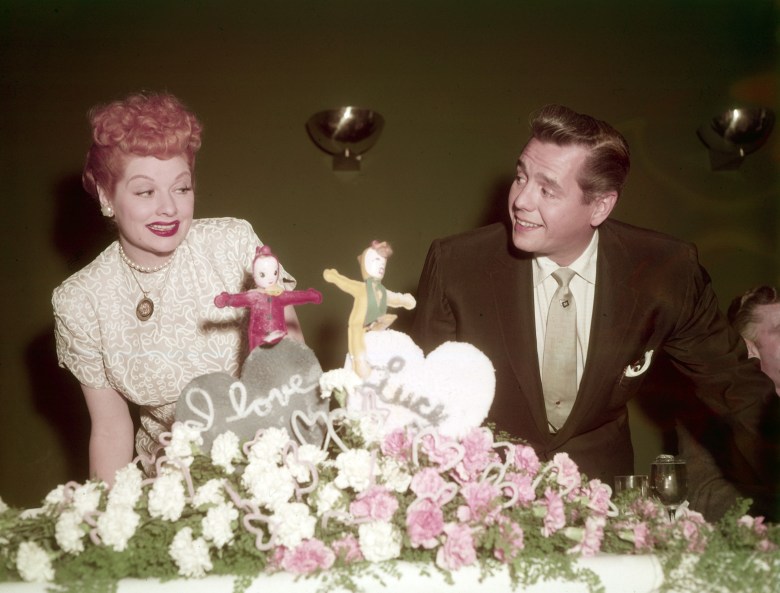 What more is there to say about Lucille Ball and Desi Arnaz that hasn’t already been said? The marriage between the two comedians played out on one of the most popular television shows of all time, “I Love Lucy,” which continues to influence sitcoms to this day. And their presence in American culture has barely waned in the years since their deaths. A scripted movie about their marriage, “Being the Ricardos,” came out just last year! So the entire crafts team behind Amy Poehler’s Emmy-nominated Amazon documentary “Lucy and Desi” knew that they had their work cut out for them.

From a narrative perspective, they had to tell a new story about Lucy and Desi that deepened fans’ understanding of the sitcom stars while respecting their legacies. And on the technical side, the team had to use their skills to elevate often-spotty 20th century footage to the level of clarity that contemporary viewers have come to expect. No easy task, but suffice it to say they pulled it off. The film’s editor Robert Martinez, composer David Schwartz, and supervising sound editor Anthony Vanchure sat down with IndieWire’s Kristen Lopez about the process of documenting one of Hollywood’s most iconic power couples.

When they began working on the project, the team understood that most audience members would have at least a surface-level familiarity with the subject matter, given the outsized influence that “I Love Lucy” had on American pop culture. That came with pros and cons, as they had to reckon not only with the real Lucille Ball and Desi Arnaz, but with the public’s perceptions of them as well. They also had to ensure that their own creative contributions to the project were serving the specific narrative the film set out to tell above all else.

For example, many fans have noticed that the film’s theme music, composed by Schwartz, resembles the theme song from “I Love Lucy.” The composer explained how he struck a balance between his subconscious nostalgia for the iconic show and the need to ensure that the documentary could stand on its own.

“I don’t think I ever consciously said ‘let’s make it sound like the ‘I Love Lucy’ score,'” Schwartz said. “But it seeps in there.” He added that when he played an early draft of the theme for Poehler, she encouraged him to tone down the similarities even more. “She did like it, but there were ‘buts’ in there,” he said. “I think she wanted more on the drama side and less on the light side. And I liked that, so we started going more in that direction.”

Balancing clarity with authenticity was a constant struggle for the crafts team. Vanchure spoke about how much of the existing audio footage of Desi Arnaz was “really rough” due to a combination of old technology and his accent getting thicker as he aged. Vanchure frequently found himself torn between difficult audio and his desire for clarity and aversion to subtitles. Still, as easy as it would have been to scrap some of that footage, the team pulled through because that accent was an essential part of who Desi was.

“He had an accent, which is kind of a testament to his roots,” Martinez said, adding that performing with an accent was “a choice to keep that part of your homeland, part of your culture. Desi never lost that.”

One angle that the entire team was particularly interested in was telling the story of Desi Arnaz as a person separate from Ball. Martinez and Poehler took extra care to show him as more than Ricky Ricardo, highlighting the pain that he endured when their business struggled.

“Trauma wasn’t a thing that people talked about back then,” he said. “Especially with men, and especially in the Latin culture there’s an element of machismo and not talking about that sort of stuff. And I think, where we are now, we can talk about those things. It’s still tough, but giving sort of relevance to his journey and losing it all and having to reinvent yourself. It’s a very American story, in that way.”

That was just one of many ways that the team found themselves learning more about one of the most public marriages of the 20th century as they got deeper into working on the film. Crafts team members said they left with a deeper appreciation not only of Lucy and Desi as people, but of the impact that they had on the entertainment world at large.

“The overall perspective of this movie was really stunning,” Schwartz said. “The innovations are incredible. They changed television. They changed the way it’s shot, they created reruns, they shot on film, and so many more. And they were one of the big studios that was producing all these other super well-known shows.”

“I knew they were hard workers,” Vanchure said. “But just seeing the footage of everything they did… it just puts Lucy in a new light to me.”

Much of that new perspective was made possible by Amy Poehler, whose involvement attracted most of the crafts team to the project and who crafted the narrative they used to tell Lucy and Desi’s life stories. The whole team had praise for her work as a director.

“There’s so much that she’s done in her career that makes her a good candidate to be a documentary director,” Martinez said. “Her coming from improv training and being on ‘SNL’ and these sorts of things, she’s not precious with everything. It’s about the full piece, and she doesn’t get caught up in the weeds on things. Very quick to keep moving, and doesn’t slow the process down. She’s a very decisive storyteller, and for a documentary that’s very helpful because the story is always changing.”

Still, while Poehler’s name might generate the most attention, everyone who worked on “Lucy and Desi” emphasized that the project was a team effort. The film’s six Emmy nominations reflect that, and getting to experience this together makes the awards run even more special for the crafts team.

“I’m most grateful that everyone is represented,” Martinez said. “Six nominations is a big number and everything. But us, who worked on the project, we all put faces to those numbers. So it’s kind of the best case scenario that all of our pool is represented and we can all be there and lose to The Beatles.”

IndieWire’s Consider This Conversations brought together Emmy nominated cast and creative team members from five of television’s most prestigious shows to discuss some of the best art and craft of TV production of 2022. In addition to “Lucy and Desi,” other featured shows include Amazon’s “Marvelous Mrs. Maisel”, as well as Netflix’s “Stranger Things,” VH1’s ”RuPaul’s Drag Race,”  and National Geographic’s “Life Below Zero.” Follow them all here.

This Article is related to: Television and tagged Amy Poehler, Consider This Panels, Lucy and Desi