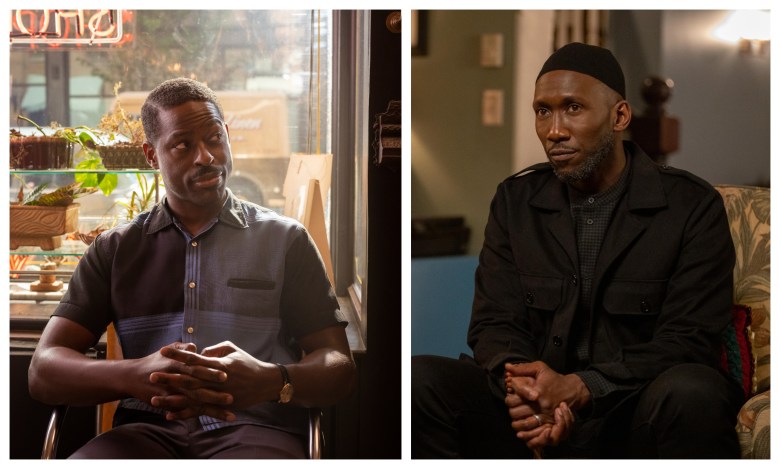 There are a lot of little joys in life that you don’t necessarily realize exist until you lose them. Exchanging smiles with a stranger, petting random dogs while out on a walk, or, say, eavesdropping on conversations while out and about in Los Angeles.

A bad habit? Probably. But in reality, it’s another way to appreciate just how culturally diverse and distinct the city’s community is, as those chats provide a window into worlds you’d otherwise not be privy to and an opportunity to listen and learn without feeling the need to unnecessarily insert yourself into the narrative.

That’s largely the spirit of this week’s episode of IndieWire’s TV podcast “Millions of Screens,” which features two of the finest actors of their generation — two-time Oscar winner Mahershala Ali and two-time Emmy winner Sterling K. Brown — in conversation with each other.

Friends since their shared time at NYU’s Tisch School for the Arts, fate has brought Ali and Brown’s names together yet again by way of the Primetime Emmy nominations. Both Ali’s work as Sheikh Ali Malik on Hulu’s “Ramy” and Brown’s turn as Reggie on Amazon’s “The Marvelous Mrs. Maisel” garnered nods for Outstanding Supporting Actor in a Comedy Series — an achievement for two men too funny to be pigeonholed into only dramatic roles.

The dramatic push started early for them both, when their sonorous voices led them to often be cast as 60-year-old men in drama school and never the romantic lead. Brown shared that he made a point of pushing back against that conception with professors, letting his sense of humor shine when he wasn’t on stage.

While the star of NBC’s “This Is Us” has seen turns on a few TV comedies, including HBO’s “Insecure” and NBC’s “Brooklyn Nine-Nine,” “Mrs. Maisel” is his first extended stint. For Ali, it wasn’t until an episode of HBO’s “Room 104” in 2018 that he had the opportunity to stretch his comedic muscles. That is, until his role as an imam on “Ramy.”

Sterling K. Brown in “This Is Us”

Brown and Ali come together to talk about their careers and their processes, but at every turn their conversation returned to their mutual respect and longterm affection for each other.

“It brings me so much joy, the way we get to root for each other,” Ali told Brown early in the interview. “I finished ‘Mrs. Maisel’ last week and every time, Sterling, you came on screen I just lit up. Then by the end, by that last episode out by the plane, your work, bro. That’s why I need you in my life. There’s so many terrific actors, there just are so many people doing great work, but when I see you, there’s this extra thing that you bring to it. There’s this extra sense of awareness and presence and you’re just so sharp, like a Ginsu when you work out there. So I’m just honored just to be in this category with you.”

“It’s stupid, the talent that is present in the category. And I get a chance to mention my name amongst them, including you, sir. Because let me turn it around,” Brown said.

“So Mahershala being the man of faith that is, he’s very careful about the words that he uses to uplift and not to tear down, so profanity is not in his normal day to day,” Brown said. “So let me say the f-u-c-k that this brother musters is in the midst of “Ramy” this year, like it came from the soles of his feet, all through his knees, works up through the pelvis, straight from the gut: ‘Fuck!'”

“You know, it’s funny, I wasn’t super confident about that scene because I had mixed feelings,” Ali said. “You know how you’ll shoot something and things get cut together a certain way, you’re like, ‘Sure, OK,’ and so you as an actor, you’re always missing out. You’re always missing, at least in your head, what should be there? And so I was conflicted about the scene. I was like, ‘I don’t know…’ And then when you text me and you were like, ‘Bro.’, I was like, ‘All right. I feel good now. I got the word from the chief. I’m good. Sterling appreciated it. So I’m all right.'”

But don’t get it twisted. While there was plenty of mutual admiration, there was also plenty of chop-busting, particularly when Brown arrived a few minutes late to the (online) interview. Ali cheekily pointed out that it was interesting that the guy who already had two Emmys was late, while the person still looking for his first Emmy was right on time. It would not be the last time the two engaged in such good-natured ribbing.

The good news is, you can hear it all for yourself. This week’s episode features a cut-down of the entire conversation between the pair of Emmy nominees, featuring only scant involvement from the regular “MoS” crew. In keeping with ongoing social distancing mandates, this week’s episode was again recorded from the comfort of everyone’s respective Los Angeles-area apartments, and we’re again offering viewers a video version of the podcast, as embedded above.

TV Awards Editor Libby Hill, TV Deputy Editor Ben Travers, and Creative Producer Leo Garcia are on hand, as well, to dig into the latest industry news from the past week, including an exciting casting coup, as Netflix announced that Elizabeth Debicki would play the People’s Princess in Seasons 5 and 6 of “The Crown.” They’ll also touch on the cancellation of “Patriot Act with Hasan Minhaj,” plus news on when “Ozark” will return to production. Apparently all of the news this week was made by Netflix.

And completists, take heart. Friday will see  the entire Ali and Brown tête-à-tête released for your listening pleasure.