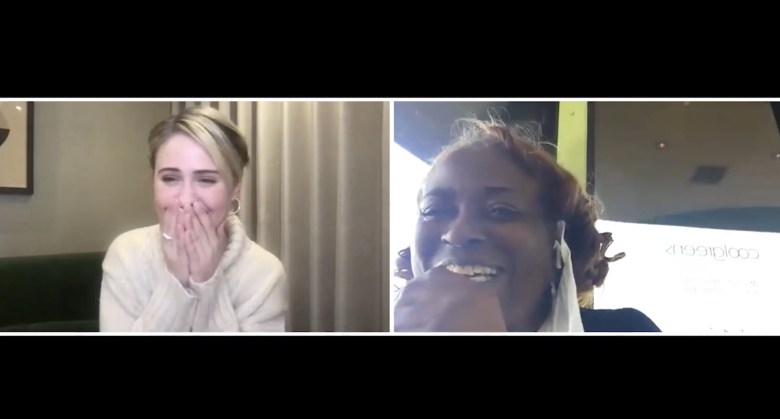 “Borat Subsequent Moviefilm” made headlines last fall when it captured Rudy Giuliani in a hotel room, seemingly ready to engage in untoward behavior with a teenage journalist. In reality, that was Maria Bakalova, the 24-year-old Bulgarian actress now nominated for her first Oscar for Best Supporting Actress. Bakalova’s out-of-nowhere turn as Tutar, the uncivilized offspring of Sacha Baron Cohen’s satiric Kazakh journalist, marked one of the year’s great breakout stories.

However, a key aspect of Tutar’s journey owes much to the work of another great discovery, a woman who had no idea she was part of a mainstream comedy. Jeanise Jones, a 62-year-old Oklahoma grandmother, was initially asked by her church to participate in a documentary.

As Jones has recounted many times since the film was released, she believed Bakalova was a real-life Eastern European teenager whose misogynistic father wanted to sell her off to an older man and force her to have plastic surgery. Tasked with babysitting for Tutar, Jones plays a key role in liberating the young woman from her father’s expectations and encouraging her to embrace her individuality. While Baron Cohen’s antics typically force unsuspecting victims to reveal their biases, in Jones’ case, they helped celebrate a fundamentally good person.

All of which meant that Jones ended up having a genuine emotional impact on Bakalova, even though she couldn’t reveal it at the time. When IndieWire reunited the pair over Zoom this month, the actress immediately dissolved into tears when Jones showed up. “I love you!” Bakalova shouted, yanking her mother — who does not speak English — into the frame for a brief introduction. “You’re just the most beautiful human creature that every existed,” Bakalova said. “I’m lucky that I met you.”

Jones, who has been processing the reality of the production for months, smiled. “Oh, I was lucky that I met you,” she said. “Even though it was fake.”

Initially, Jones said she was concerned about Tutar’s future, even praying for her with her church community in Guthrie, OK after the production wrapped. “I was worried about you when you didn’t show back up,” Jones said. “But you were already grown, playing your role, and you played it very well.”

In the movie, Jones talks Tutar out of her assumptions, explaining to her why women can be educated, drive cars, and other seemingly self-evident aspects of gender equity taken for granted in the Western world. “I thought she was a sweet, innocent teenager who was really trying to please her father,” Jones said. “I was just trying to convince her that she didn’t have to do that.”

Jones, who does have cable or streaming services at home, had no idea about the reality of the production until her cousin showed her a trailer on his phone the week of the release. “He said, ‘Jeanise, is that you? The movie’s coming out Friday,’” Jones recalled. “I said, ‘What movie?’”

Jones told media at the time that she felt “betrayed” by the project, but she has since come to terms with Baron Cohen’s satiric approach. “I was really torn for a moment,” she said. “But it did serve its purpose.”

Eventually, Jones’ pastor started a crowdfunding campaign for Jones, who was unemployed, and Baron Cohen himself donated $100,000 to her church. “That was real sweet,” Jones said, noting that the contributions helped the church provide shelter during a recent storm. “We are putting it to good use.”

Bakalova said she was so affected by Jones during the project that the actress struggled to stay in character. “It was easier to go to the White House,” Bakalova said, referring to another sequence shot for the movie that didn’t make it into the final cut. “For me as a human being it was challenging to not stop and say, ‘Don’t worry, I’m a real human, I’m not a character, I’m going to be fine. I’m not going to be married to somebody just to please my father. I am going to use my brain.’”

Bakalova was especially impressed by Jones’ even-handed guidance. “Even though she does not agree with me, she won’t say something against my father because she is a good person,” Bakalova said. “She is guiding me to the point where I can realize it myself.”

Jones nodded. “That’s the advice I’d give any teenager, no matter who it was,” she said, crediting her mother with taking the same approach. “That’s how she was. She was never judgmental. She would just tell you how it is, and that’s what I do. [If] I feel like I have to sugarcoat it, I won’t say anything.”

At times, though, Jones felt compelled to raise concerns about Tutar’s worldview with the production team. “When you told me girls don’t go to school, just boys, I’m begging to the producer, ‘Just please, please take her to a class so she can see that girls can get educated, too,’” Jones told Bakalova in their conversation.

The pair laughed about one scene, which didn’t make into the movie, that found a newly woke Tutar fleeing the scene, an act that Bakalova had worked out with the writers in advance. “If you think about it, if there is a real girl who has been taught all these crazy things and she faces the reality of what her babysitter is going to tell her, she might run away because every new beginning is scary,” Bakalova said.

The Zoom reunion was technically the second time that Bakalova spoke with Jones out of character. The actress previously called Jones by phone over Thanksgiving, which was Bakalova’s first time experiencing the holiday in America. “I  just couldn’t resist,” Bakalova said. “Who should I thank? It’s her. She is my idol.”

Jones said she only received one negative comment about the movie, sent to her via Instagram, from a person who accused her of playing a scripted role. “Otherwise, everybody was positive,” she said. She agreed to present a clip from “Borat Subsequent Moviefilm” at the Golden Globes last month, and is in talks for a secretive acting gig that might go into production this summer.

Meanwhile, Bakalova is coming to terms with her burgeoning career as a comedic actress. Though she was trained on dramatic roles and idolized Dogme 95 films, Bakalova joined the interview from the London set of Judd Apatow’s forthcoming ensemble comedy “The Bubble,” which finds her in a more traditionally scripted part. “It’s not as scary as ‘Borat,’” she said. “The more I watch comedies, the more I realize that a lot of big messages have been coded there with things you want to say to make an impact.”

As their conversation wrapped up, Bakalova said she hoped to remain in touch with Jones and continue to benefit from her advice out of character. Jones said she would oblige. “I care and I love her, I always want to stay in touch with her, no matter how many movies she makes or how big she gets,” Jones said.

Watch the full conversation above.

This Article is related to: Awards and tagged Borat 2, Consider This, Jeanise Jones, Maria Bakalova