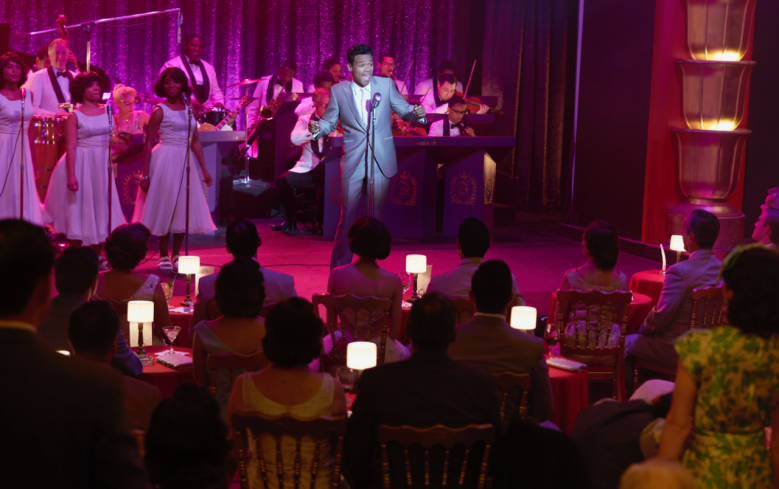 “The Marvelous Mrs. Maisel” may be about stand-up comedy, but the unsung heroes of the Emmy-nominated Prime Video series no doubt are the musical geniuses behind the original songs for the 1960s-set period piece.

“We are there for every part of the process, which is just so incredible,” Mizer explained. “We get to be writing, in the recording studio, and on set, which is just so rare. We are there to actually make changes in the songwriting as we’re watching what the actors are doing. As we see what the camera move is going to be, we can run back to sound and make cuts on the song.”

Urdang added, “It’s incredibly fast and furious,” saying that everything “has to be done to perfection because that’s how the show is.”

The music behind “Maisel” truly is the backbone of series, focused on authenticity and feeling organic to audiences, like truly stepping back into 1960.

“It’s such a fun period to be writing music,” Moore said. “We really try to be as authentic as we can.”

And charismatic ballad singer Shy Baldwin (Leroy McClain) works with the real musician behind the voice, Darius de Haas, right from the beginning in the studio.

“The two of them really became a unit to play Shy Baldwin,” Moore added. “It was really wonderful to watch the two of them.”

One track for the season, “Maybe Monica,” proved to be among the most difficult, as it involved real-life musical icon Harry Belafonte, fictionalized onscreen by Josh A. Dawson. Mizer joked he had to “unlock a music theater brain” after series creator Amy Sherman-Palladino reframed the song to be part of a wedding toast to Shy.

Among the less polished songs for Season 4 included the background music at a burlesque club. Urdang credited the scene as a highlight for the series because “it’s a mess at first” with jumbled music backstage, costumes ripping, and a generally uneasy sway. But the music gets better as it goes along, progressively becoming more enjoyable to listen to. Capturing that transformation wasn’t easy.

But the musical performances on set sometimes are so convincing that even cast members think the musicians onstage are really playing.

“The extras on set don’t realize these musicians who are playing onstage are not what you are hearing,” Mizer said. “We pre-recorded it with an orchestra. That’s a tribute, I think, to really well-planned recording sessions, making sure we have all those pieces together, and having that flexibility.”

IndieWire’s Consider This Conversations brought together Emmy nominated cast and creative team members from five of television’s most prestigious shows to discuss some of the best art and craft of TV production of 2022. In addition to Netflix’s “Stranger Things,” other featured shows include Amazon’s “The Marvelous Mrs. Maisel” and “Lucy and Desi,” as well as VH1’s ”RuPaul’s Drag Race,”  and National Geographic’s “Life Below Zero.” Watch them all here.

This Article is related to: Television and tagged Consider This Panels, Prime Video, The Marvelous Mrs. Maisel