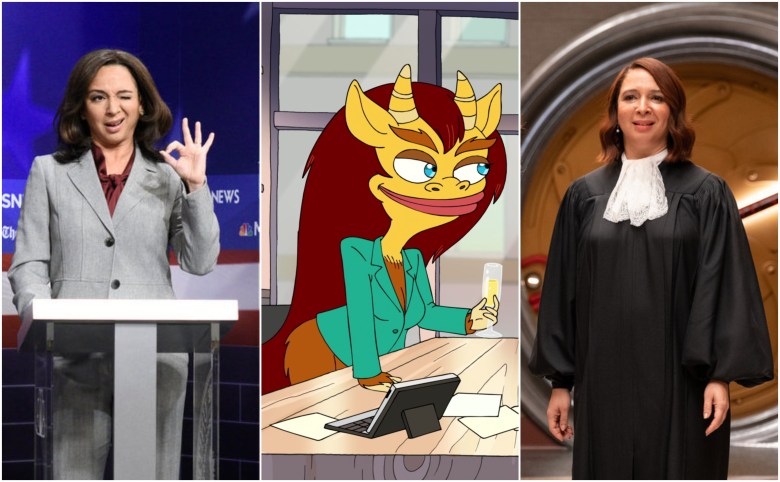 And now she has.

When the 2020 Emmy nominations were released July 28, Rudolph had been nominated twice for Outstanding Guest Actress in a Comedy Series (for NBC’s “Saturday Night Live” and “The Good Place,” respectively), which according to Gold Derby, made her the first person in history to be nominated twice in the same guest category in a single year.

If that weren’t enough, Rudolph earned another nomination for her work on Netflix’s “Big Mouth,” where she contributes several characters, perhaps most memorably Connie the Hormone Monstress, who upon her introduction in Season 1 immediately became a fan favorite.

But Rudolph isn’t just talented. She’s thoughtful and humane, which made her recent video interview with IndieWire such a delight. Here’s what she had to say about the roles and shows that nabbed Emmy voters’ attention (and respect).

“As a person who for so many years played different people on ‘Saturday Night Live,’ it’s such a joy to get to be part of the race. You know, I did Obama once when he was running and never made it to air, and I think that’s a good thing.”

“[‘Saturday Night Live’] is really the only place I will do anything for and they know that. I think Lorne [Michaels] learned that about me a long time ago. He knows I’m a lifer. But for some strange reason, I’ve been lucky to return there so many times. That’s why this Emmy nomination for playing Kamala is so nice because it really is a joy for me. I got to go and I brought my 14-year-old daughter with me who hadn’t been there since she was a little girl, and I got to see all my friends that are still there. The crew is like family, you know.

“And that part, for me, means more than anything. That place means so much to me. It really does. And it’s one of those things, like, if you have anyone or any thing in life where when you go there again, you’re right back where you left off, that’s what that place is for me. It really soothes me somehow. My husband said he saw me and he said, ‘You look so happy.'”

“It’s so fun to get to do voiceover because you do so many different voices. And so that day, they asked me to try to do this voice that they thought would be fun. It definitely helped that Nick knew my voice well and from there, we just tried to figure out how [Connie] could really chew up words and that, because she was a monster and a monster for hormones, specifically, she had this roller coaster of a voice, roller coaster of of emotions. She was this hairy woman; this like hairy, juicy, female-formed thing and a monster to boot, so we just tried to figure her out.

“I don’t know how we got to that voice because I can barely remember. I was in New York and everyone was out here in L.A., and I was just doing it and trying it and I think I’m pretty sure ‘bubble bath’ was in that first episode and when we hit those Bs we were like, ‘Oh, that’s what we’re going to do. We’re going to like really make a meal out of that.’ And I think it was ‘tortellini’ or ‘tiny tortellini,’ or something. Her alliterations were something that were fun. She’s such a great character because she’s fun to give words to. You know, you want to hear her read the phone book.”

On Judge Gen (“The Good Place”)

“I feel like the fact that Mike Schur [creator of “The Good Place”] saw me that way and had me play the judge was in and of itself, a gift. Those are the moments where, when you’re younger you’re like, ‘I wish someone would just give me a really cool job. Someone who just sees me as someone who’s really fantastic and knows everything and is in charge of everything.’ And then someone who really knows you and sees you says, ‘Here you go.’

“It really allowed me to connect to the show so instantly, as though I had always been there. And they’re all such lovely elements to that show and then it was like we had always been there together. I think I always prove to myself that I’m an actor, when I have a job that makes me feel like, ‘Oh, I got to be that a little bit. I got to be an inter-dimensional judge that gets to decide if people live or not and has opinions about the universe. It’s very cool to be thought of as that. I’ll take it. So I feel very honored.”

For more from Maya Rudolph, check out the video interview embedded above.