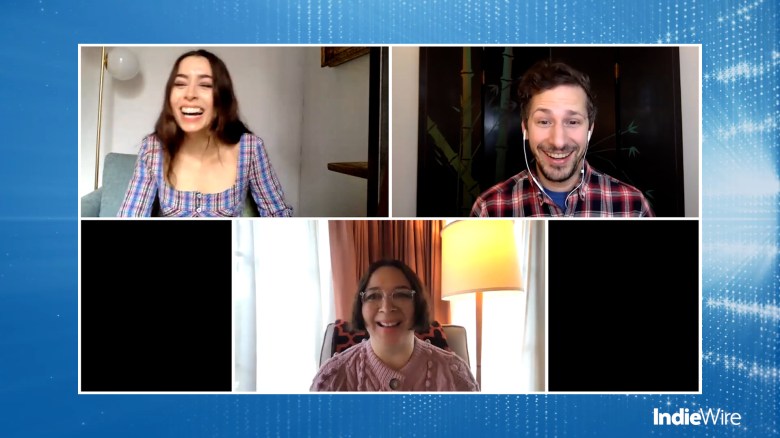 Consider This: Conversations highlight award-worthy films through panel discussions with the artists themselves. The above video is presented by Hulu and produced by IndieWire’s Creative Producer Leonardo Adrian Garcia.

Andy Samberg and Maya Rudolph are friends and colleagues whose shared credits date back well over a decade, having shared the screen in roles on “Brooklyn Nine-Nine” and “Saturday Night Live.” So when it came to interviewing Samberg and his “Palm Springs” costar Cristin Milioti in an interview for IndieWire, presented by Hulu, Rudolph came at it from a unique perspective.

“I know I love a movie when I want to be in it. Thanks for this movie, it’s fantastic. I love it a lot,” Rudolph said. “Andy knows me well enough to know when I’m lying, so you can verify, right?”

“Palm Springs” stars Samberg and Milioti as previously unacquainted wedding guests who become very close as they become trapped in a time loop where the day’s events play over and over again. In the interview, Samberg, Milioti, and Rudolph discussed how the genuine chemistry between the two actors helped make the film so enjoyable.

“He can be unhappy with people he doesn’t enjoy,” Rudolph said. “You clearly spark the joy in him and you were so strong in your own right.”

Samberg said he and his producing partner Becky Sloviter had been a fan of Milioti since seeing her opposite Jesse Plemons in the “Black Mirror” episode “USS Callister” and her 2015 role in “Fargo.”

“We had been talking a lot about Cristin,” Samberg said. “She’s a very good actor. We were like how can we get her in something. She was coming for a meeting at our production company, and we had a really fun meeting and hit it off. ‘Palm Springs’ came in around the same time and me and Becky were both like, ‘We should see if Milioti wants to do this.”

Milioti recalled a meeting planned for 20 minutes that went for three hours. “I remember telling you about really demented things about extended family members. We went really deep,” she said.

The shoot lasted a brief 21 and a half days, which meant some scenes — such as Milioti’s character’s wedding speech — got only two takes. Milioti said as much as this was anxiety-inducing, there was a “trust-fall” element to the production.

“I found that to be very, very challenging, but ultimately, in many ways, freeing. I have to trust that I know what I’m doing, I’ve read the script 10,000 times, we’ve had all these conversations,” she said.

Samberg said much of the success of the film’s execution came down to casting the right people and having a dedicated and talented crew.

“With Kristen and I, we had a feeling that we would be good together because we immediately felt like friends,” he said. “You get Meredith Hagner and you get Conner O’Malley, you get J.K. Simmons and Peter Gallagher in there, you get all these people that you know are going to bring something interesting every second they’re on camera and you just know that you’ll find the best moments for them in edit.”

“Having our training in ‘Saturday Night Live’ I think has given us such a fundamental understanding of how to get things done in the allotted amount of time and pulling things off,” she said.