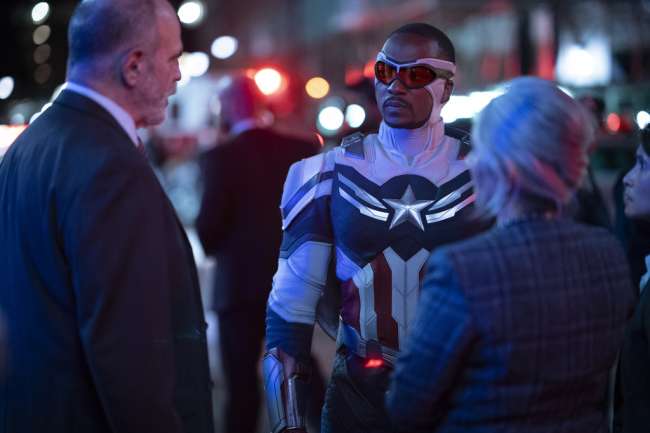 At first it seemed a bit like a mistake that Marvel wasn’t using the world showrunner. Television was a medium that the Marvel Cinematic Universe hadn’t much traversed in and a few growing pains are to be expected. After all, this is the same monolith that made the decision to enter “The Falcon and the Winter Soldier” into Drama Series competition at the Emmys, based on tone and not content, flying in the face of conventional wisdom which sees those determinations made based on the continuing or concluded nature of a narrative.

“[The decision] came about sort of as the series was launching, but it was something we were thinking about even as we were making it — not because we think, ‘Oh my God, it’s so great,’ but because it does feel a bit more dramatic than some of our typical stuff,” Marvel Studios VP of Production & Development and “Falcon and Winter Soldier” executive producer Nate Moore told IndieWire in April. “As this is sort of our first foray into television, even if it’s Disney+, we thought [the category placement] was appropriate for what the show is trying to tackle.”

But over time it became clear that the MCU knew exactly what a showrunner was and how vital the role is to making television shows. They just… didn’t care.

That’s an unfair statement, obviously. It would be more accurate to say that the MCU isn’t interested in how traditional TV is made because it isn’t actually interested in making TV at all.

In a Variety report from May on this very issue, “Falcon and Winter Soldier” director Kari Skogland spoke about how she was looped into the decision-making process in a far more comprehensive way than many directors on a TV series.

“It’s a nuance, but it’s one that I think is being embraced more and more because the job honestly in these big, epic miniseries or shows is too big,” Skogland, who’s also an executive producer on the series, told Variety. “I was in the writers’ room so that I could really absorb what was being said and be part of the process by floating ideas. As we were going through production, we would workshop scenes and then ask for rewrites on things. So [Malcolm Spellman; head writer] was still very much a part of the whole process, but it’s a slightly different mechanical way it comes down. Honestly, it’s very effective and efficient, because it’s just too much work for any one person.”

It’s strange to hear that sentiment from Skogland of all people, whose entire career has been built around being a ringer who brought her directorial talents to any number of TV’s most prominent shows, including “The Walking Dead,” “Boardwalk Empire,” and helming the towering Season 1 finale of “The Handmaid’s Tale.” TV is the antithesis of a one-person-show and for good reason.

Most TV shows are built around the center of a writers’ room, helmed by a showrunner, whose responsibilities are vast, but include shepherding the series where it needs to go and making sure it moves forward in congruence with where it’s gone before and where it hopes to end up.

The showrunner then works with whoever is directing specific episodes to bring them up to speed and trust their vision to fit into that of the series at large, thus forming a cohesive whole.

Admittedly, that can be different with limited series, particularly as TV sees more passion projects from established creators. Amazon Prime Video’s “The Underground Railroad” was helmed at each turn by Barry Jenkins, but Jenkins was also working within the writers room he had created. He was still showrunning, he was just also directing. What Skogland is describing and what seems to be plaguing the MCU’s Disney+ efforts is a sense of leading from the back. It’s not unheard of for something that isn’t working on the page for a director to be sent back to the room for rewrites, but when you’re block shooting as though you’re a major motion picture, it suddenly feels as though there’s been a power shift, where the writer is just a hired gun putting words on a page to match whatever the director or, perhaps more accurately in this case, MCU mastermind Kevin Feige wants to see on screen.

That’s not what TV is. The beauty of TV as compared to film is that you have the time and space to go deep and dig into much of the minutiae that would otherwise be overlooked when your story needs to run exactly 125 minutes.

Operating without a showrunner, opting instead to mash together a pastiche of story and action sequences, of dribs and drabs that feel like they’ve been slapped together from the Infinity Saga cutting room floor, all for the sake of more content before the next major motion picture is released, that’s not TV. That’s a DVD extra.

It would be one thing if the MCU would own exactly what their series are: filler until “Doctor Strange and the Multiverse of Madness” is released. But to create content and try to pass it off as anything other than the modern day equivalent of Saturday morning cartoons, developed exclusively to sell the toys featured within, is disingenuous and insulting.

One thing is for sure. The MCU has unequivocally proven that you don’t have to have a showrunner to make TV. But you almost certainly should.

For more gripes about Marvel’s treatment of a beloved media medium, tune in to this week’s episode of IndieWire’s TV podcast “Millions of Screens” with Deputy TV Editor Ben Travers, Creative Producer Leo Garcia, and TV Awards Editor Libby Hill. Then stick around as the crew airs out their complicated feelings about the trailer for a new “Sopranos” story, “The Many Saints of Newark,” plus reactions to rumors that HBO’s “Succession” will return to screens (and hearts) this fall.

This Article is related to: Television and tagged Marvel, Millions of Screens, Podcasts, The Falcon and the Winter Soldier