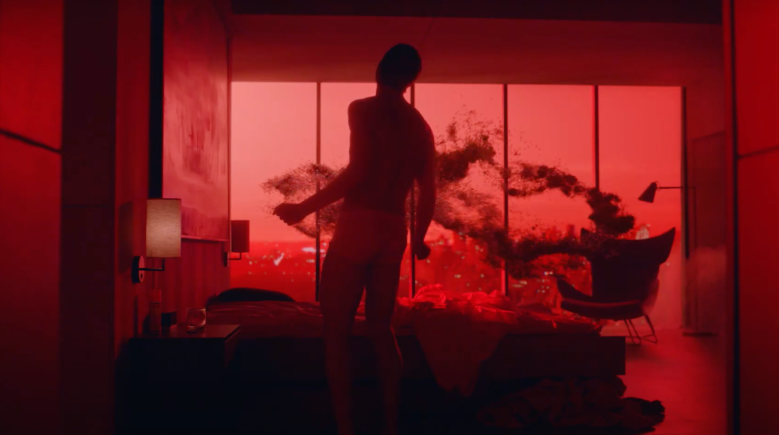 Itchy pests and Wall Street might not sound like a perfect cinematic match, but director Filip Jan Rymsza frankensteins them together with demented glee in his new horror movie, “Mosquito State.” The movie stars Beau Knapp as a finance bro who undergoes a shocking Cronenbergian transformation as mosquitoes begin to infest his apartment. It premieres on the streaming service Shudder this coming August 26. Exclusive to IndieWire, check out the trailer for the film above.

Here’s the official synopsis, for the film, which won the Best Cinematography prize out of last year’s Venice Film Festival:

On Wall Street, they’re called “quants” — the intense data analysts whose mathematical prowess can make the difference between a fortune and a flop. Consumed with his work, Richard doesn’t often stray from his office or apartment. But when Richard decides to go to a company party, he makes two acquaintances: the mysterious, sylphlike Lena (Charlotte Vega) and one pesky mosquito, both of which take root in his mind, altering his existence in profound ways.

Finding common ground between Franz Kafka, David Cronenberg and Mary Harron’s “American Psycho,” director-screenwriter Filip Jan Rymsza emerges with a new kind of body horror, set during a single week of an exquisitely rendered pre-crash 2007 replete with signs of sociopolitical and economic rot. A hypnotic plunge into the fragile mentality of an individual who can see patterns long before the rest of us, “Mosquito State” adds a significant chapter to the subgenre of urban isolation.

IndieWire’s David Ehrlich wrote out of Venice, “Unfolding like the unholy chimera that resulted from a mad scientist trying to fuse ‘The Fly’ together with ‘The Big Short,’ Filip Jan Rymsza’s ‘Mosquito State’ is such a wantonly disgusting lump of body horror… Knapp’s implosive lead performance bubbles with a demented commitment. This one holds your attention like a bite that you can’t stop yourself from scratching.”