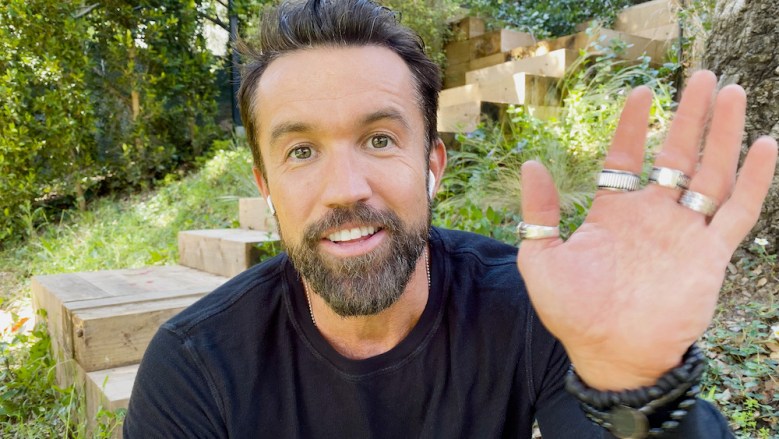 The Apple TV+ series “Mythic Quest: Raven’s Banquet” has captured fans hearts in a short amount of time, enough that it’s already been greenlit for a second season. The sitcom, co-created by “It’s Always Sunny in Philadelphia” writer and star Rob McElhenney, decided to take a chance and provide some levity during these uncertain times with the episode “Mythic Quest: Quarantine.”

Picking up in the immediate aftermath of their previous installment, the recently released entry navigates how video game creative director Ian Grimm (McElhenney) and his cohorts are dealing with staying at home.

In a behind-the-scenes video released exclusively to IndieWire by Apple TV+, McElhenney and the crew discuss how they went about creating the episode. They initially pitched it to Apple’s Cupertino production unit and, from there, took 40 cell phones, 20 sets of Air Pods — a few being sacrificed in pool water — and a few more maneuvers to put it all together.

Executive producers helped each cast member figure out how to block their scenes, get the right video and audio resolution, and have the proper frame rate for recording. Mind you, even with all this technical know-how, a good, old-fashioned clap of the hands managed to replace the standard clapperboard, and even iPhones can’t prevent flubbed lines from swallowing cereal the wrong way.

Driven by a desire to provide levity, the cast and crew also knew they needed to address the issues of mental health that are being discussed as stay-at-home orders lengthen into another month. “We realized that we had to address [that], head-on — physical health is of paramount importance, but it doesn’t supersede mental health,” McElhenney said in the video. Charlotte Nicdao’s Poppy undergoes mental health struggles in the episode, with Nicdao’s actual husband standing in for McElhenney for one scene.

IndieWire’s Eric Kohn called the episode the best in the series in his “A-” review, saying: “‘Quarantine’ disposes of the most obvious shelter-in-place bits we’ve seen spoofed on ‘SNL’ and elsewhere — gags about showing up shirtless or showerless to Zoom meetings (or, in this case, ‘MythiCom’) speed by — then builds to a satisfying and even emotional exploration of the psychological toll of coming to grips with living alone.”

“Mythic Quest: Quarantine” and the entirety of “Mythic Quest: Raven’s Banquet” are streaming on Apple TV+ now. Watch the behind-the-scenes video above.

This Article is related to: Television and tagged Apple TV Plus, Direct, Mythic Quest, Video