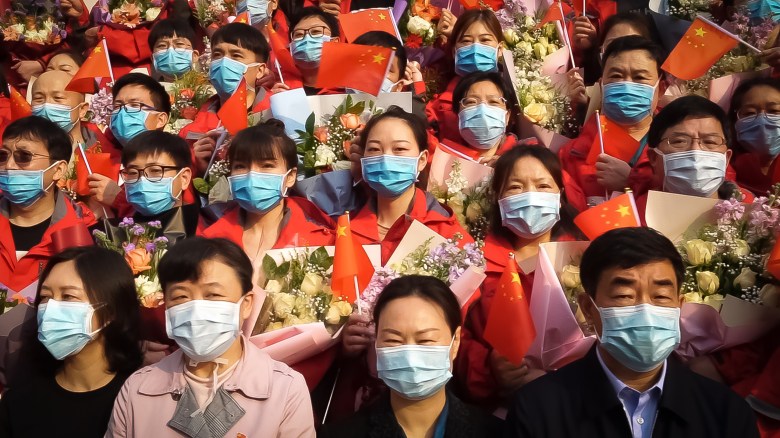 Nanfu Wang was one of the big breakouts of the 2019 Sundance Film Festival after her non-fiction feature “One Child Nation” won her the Grand Jury Prize for Documentary Feature. Two years later, the Chinese-born American documentarian is back at Sundance with “In the Same Breath,” a hard-hitting look at the coronavirus pandemic that attempts to find common ground between the United States and China over the mistakes both countries made in responding to the virus. As Wang said during an interview at IndieWire’s Sundance studio, presented by Adobe, there are “a lot of commonalities” between how the countries responded, so Americans should not be so quick to pass judgment on China.

Not passing judgment was at the core of Wang’s perspective while directing “In the Same Breath.” While the project forced Wang to document Trump supporters who believe the coronavirus is a hoax, the director said her goal as a filmmaker was not to cast judgment on these people but to understand why they believe the things they do.

“As an editor and a filmmaker I had to have the patience to understand and listen to them,” Wang said. “People in China who praise the government despite that they have family that died from Covid because of the lack of medical response and lack of care from the government, but they still say they are appreciative of the government, I look at those people and they could be my family or my friends. I would never look at them with disgust or contempt or as morally superior. I understand how they became that and how they got their information, how their ideology was formed.”

It was essential for Wang to apply that same level of thinking to COVID-denying Trump supporters. As the director explained, “Something that somebody says today, it is not the result of today. It’s the result of the past years of education and information, where they learned things. I started looking at people at the protests in the same way. I wanted to understand where they come from and why they would believe COVID is a hoax. Why would they believe it was manufactured? You have to go back to all the sources.”

One of the sources, Dr. Anthony Fauci, is shown in Wang’s documentary telling people not to wear masks during the onset of COVID in the U.S. back in March 2020. The documentary holds Fauci and others accountable for the spread of disinformation. Even if Fauci was saying not to wear masks because he did not have all the information, the mixed messaging created confusion in America and, as the documentary argues, is what supports the ideology of COVID deniers.

As soon as misinformation began to spread in the U.S., there was no going back to create a population where everyone was on the same page. “Misinformation is just like a virus,” Wang said. “There is an origin. It’s hard to find where the origin is, but it starts with a small group of people and it takes human hosts to spread from person to person. All the people who voted for Trump or believed that COVID didn’t exist, you need to go back to see where did it start and how long have we ignored that. I do want people to look at it, and not to place judgement but to look beyond those superficial issues.”

Watch Wang’s full interview at IndieWire’s Sundance studio, presented by Adobe, in the video above.

This Article is related to: Film and tagged Adobe, In the Same Breath, IndieWire Studio, Nanfu Wang, Sundance