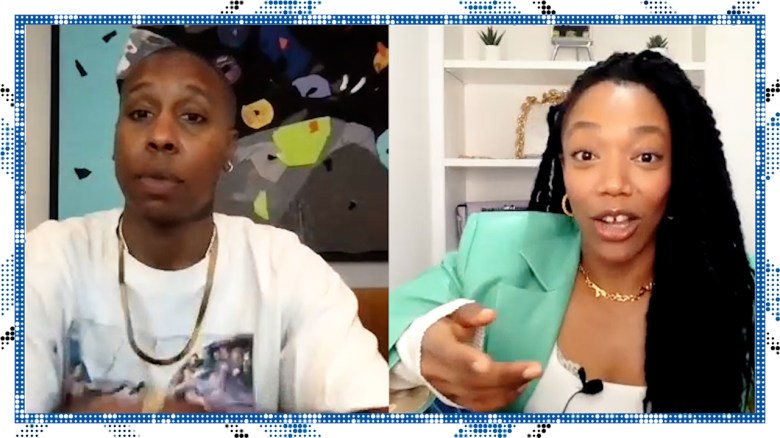 [Editor’s Note: The article contains spoilers for Season 3 of “Master of None.”]

When Netflix announced that a wholly unexpected season of “Master of None” would be dropping in late May, it was only natural for fans to assume that, given that more than a year had passed since the onslaught of Covid-19, Season 3 was a manifestation of the pandemic. That it was, perhaps, a project developed entirely in the last year and a half.

This line of thinking was furthered when it was revealed that the whole of the season revolved around one couple — a couple that did not contain the show’s co-creator and typical lead, Aziz Ansari — and that said couple, supported minimally by outside actors, would make up the vast majority of the five episode season.

But those fans would be wrong.

“I think what I’ve come to realize is that the the creative process is always ongoing,” said Lena Waithe, a longtime Ansari collaborator who co-wrote — and starred in — all five episodes said during a recent interview with IndieWire alongside co-star Naomi Ackie. “I think, with [Ansari] and I, even if we’re just casually talking, it can become something. So it wasn’t as if we set a date, it was more so just a series of conversations that were happening probably two years ago.”

Waithe explained that she and Ansari would see each other in London and catch up, and at some point he sent her some scenes which, she noted, is the quickest way to get her involved.

“So he sent me a script, and I did a pass, and then we just started playing, going back and forth. He also sent me things to watch as well, some French movies, some some other films that I hadn’t heard of,” she said. “And they were very slow. They were very melodic. And, you know, there was sort of messy storytelling in a way, as well. So I was just watching what he was inspired by, we’re having these conversations, he was having conversations with people who had done IVF and had that experience.”

“And so it never really was a pinpoint at time. I just think there was a moment when we realized we were really doing it once the script started to really finalize. And we started to find a real rhythm.”

Of course, that’s not to say that the pandemic didn’t take its toll on production.

Lena Waithe, Aziz Ansari, and Naomi Ackie on the set of “Master of None”

“It was tough,” Ackie said. “There are some scenes where I’m genuinely crying. “It’s real. But I think there was something about the fear and the tension at the time. And filming anyway, it’s quite a draining process. But then add in all of these rules around everything and masks. I think, if anything, it heightens the performances, because we felt happy to be working. But at the same time, like oh my gosh, there’s so much going on in the world. And we’re here and it was just a mad experience.”

“Yeah, it was all the things,” Waithe added. “It was, you know, the longer quarantine because there was a COVID scare on set. The waiting for hours if somebody’s test came back inconclusive. It was a whole other layer on top of an already draining season. But I think that’s why we’re so proud of it. The fact that we made it. The fact that we got it done and didn’t kill each other in the process.”

The not killing each other in the process was almost assuredly doubly-hard given the fact that the bulk of the season is dedicated to the disintegration of a relationship. In it, Waithe’s character Denise, who appeared regularly in the first two seasons of “Master of None,” is breaking up and breaking down with wife Alicia after the path to parenthood exposes undeniable cracks in the foundation of their marriage.

It’s a very particular kind of challenge when two actors must build a chemistry that seems long-established, with all the comforts and ease-of-existence that implies, but to have to build that and then immediately tear it apart is another hurdle entirely, which is precisely what Waithe and Ackie were asked to do, in short order.

“We did voice notes,” Waithe said about how she and Ackie started laying the groundwork for their fictional relationship. “Just getting to know each other that way. We were able to do that for a nice little bit because we had some time from when we cast and when we shot. But also, just in the audition space, which we read in person when I came to London, it was also a natural comfortability that you can’t fake or force or work at. I think that’s what Aziz and I have and why he wanted to bring me in; because we had a very natural chemistry.”

Lena Waithe and Naomi Ackie in “Master of None”

“And I think that really happened with Naomi. We just tried to build upon the things that were already there and also lean into our different energies. We really knew that we wanted Alicia to have her own journey and go through certain things. Denise is on a different journey than she was and it was okay that we play it differently and react to things differently. I think it all just came together.”

“We had around two weeks of prep time where we would see each other every day,” Ackie said. “Working around the script and figuring stuff out, so there was a lot of time to chill, catch each other’s vibe, do some rehearsals. And I think quite naturally when you’re filming, it’s just a thing that happens. You need a rhythm and we knew what we wanted to achieve. I think everyone was on the same page about that.”

While the role that Ackie stepped into was always going to be a challenge, with Alicia diving headfirst into an IVF process that can be overwhelming at best and soul-destroying at worst, there was the added element of walking in as a main character on a series established years prior.

“it’s just quite surreal. I think like I respect [Waithe and Ansari] so much as creatives from the get go, from years back,” Ackie said. “To not only work with them, but to like, have input and be collaborators with them and really make a product that I think we all feel like so proud of you It’s just worth it, man. It’s just really genuinely crazy watching “Master of None” for all these years… It’s just weird. And I’m so very grateful for them and so grateful that the show has made such an impact.”

Naomi Ackie and Lena Waithe in “Master of None”

More than anything with regards to Season 3, the aspect that got people talking was Episode 4, a standalone that delves into Alicia’s IVF journey, a depiction that some found intensely gratifying, given that infertility is often a taboo topic that rarely has an accurate depiction within our culture at large.

“It’s something that I have not experienced at this point in my life, or Aziz. But we know people who have and I know queer women in particular,” Waithe said. She went on to explain that through her research with Ansari, they discovered that insurance companies and hospitals aren’t as inclusive as they could be, on a number of fronts.

“In finding out what that [medically-assisted reproduction] journey is, and then also talking to friends, it just felt more and more important,” she said. “And I really got in there a lot with Aziz, just making sure it was right and making sure it felt accurate and honest and real.”

“In terms of in terms of being a queer, Black woman, [Ansari] definitely let me get in there and do my thing.”

This Article is related to: Awards Spotlight Spring 2021 and tagged Direct, Lena Waithe, Master of None, Naomi Ackie, Netflix