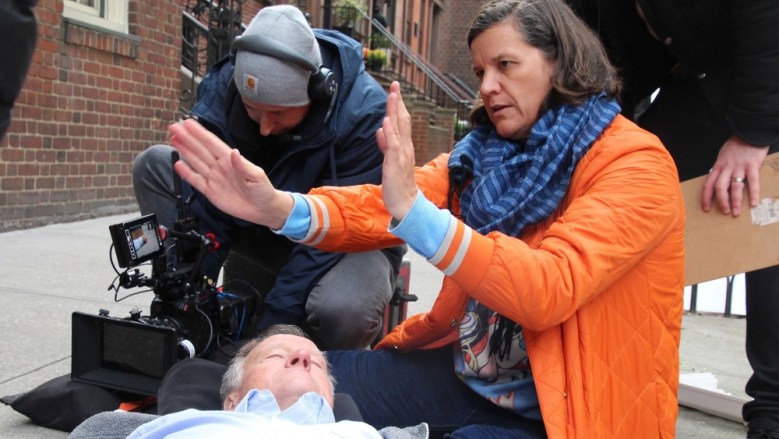 Kirsten Johnson entered the process of making “Dick Johnson Is Dead” feeling like she was already behind. She wanted to make a film with her father, Dick, who had been diagnosed with dementia, and tackle conversations with him about his decline and death, while also celebrating his life, all before he was too far gone.

While Dick was still fairly coherent and his good-natured self at the beginning of filming, plans to capture an ambitious globe-trotting adventure would have to be scrapped. Instead, the father-and-daughter duo, plus working Hollywood stunt performers, staged various ways Dick could die, followed by a funeral, which all of Dick’s family and friends could attend while he was still very much alive.

Johnson may have had a distinct vision for the often humorous, therapy-meets-cinema approach of how to handle capturing the end of her father’s life, but by its very nature, it was an approach that was constantly being reinvented and evolving throughout.

“The starting point of the movie was knowing failure was inevitable,” said Johnson, when she was on IndieWire’s Filmmaker Toolkit podcast. “Knowing sometimes we’re compartmentalized and in control enough that we can crack things, and imagine things, and make them happen, and sometimes it’s so out of our control we can’t even get the focus.”

In the video essay above, Johnson breaks down such moments, like when she had to put the camera on the floor to embrace her father as he cried, or in another scene where she had the impossible task of being both a New York City driver (and dropping her kids off at school) and a filmmaker trying to capture her father’s contemplative thoughts as he looks out the car window.

“It’s high stakes, I could have crashed the car because I was trying to do too many things at the same time, which is sort of what life asks of us,” said Johnson. “And then you hit the edit room and it’s Nels [Bangerter] the editor doing jump cuts between those close-up shots [of Dick in the front of the car], because he’s so fascinated in my father’s eyes as the dementia makes him go blank, reattaches him to reality, and goes blank again.”

From voiceovers to the big fantasy music video sequence, Johnson dissects a number of elements of her film that, at first, didn’t seem work, ultimately inspiring her to push through to find something better. She also explained her unorthodox, but extremely fruitful, process of doing three different sound mixes throughout the filmmaking process to allow audio to inform the film’s evolution.

To see examples of how Johnson found cinema in the unexpected, scroll up to watch the video above. To hear the full conversation, subscribe to the podcast below.