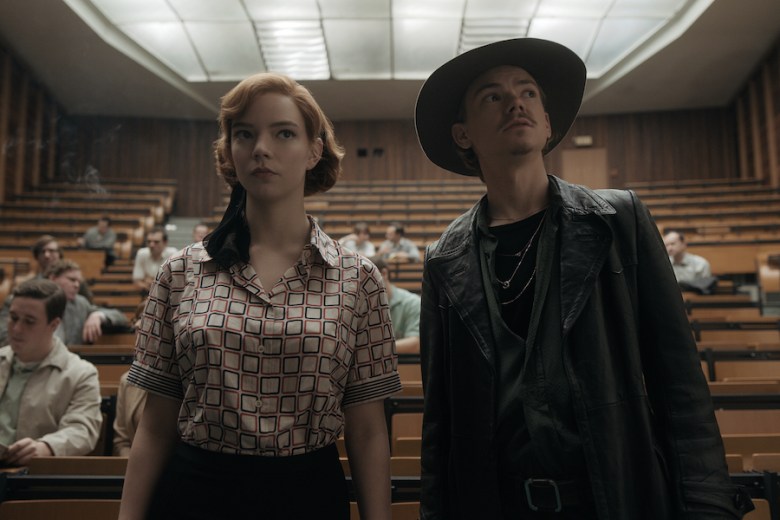 It wasn’t supposed to play out like this. When Netflix entered the original programming game, after already playing disrupter with its streaming service drawing new eyes to shows overlooked on the confines of cable or network TV, it appeared inevitable that the media disrupter would be the first streamer to score one of the biggest prizes in the industry: an Emmy for Outstanding Series, be it Drama, Comedy, or Limited.

It was not to be. For eight years, those prizes have eluded the entertainment monolith, but as we draw closer to this year’s Primetime Emmy Awards ceremony, it’s becoming beyond possible and near guaranteed that thanks to either “The Crown” or “The Queen’s Gambit” — or more likely still, both — Netflix’s dry streak will come to an end.

On this occasion, then, let’s look back to how we got to this particular moment in history.

In 2013, its second year of offering original programming, the streamer made a splash when Emmy nominations were announced, garnering nine nominations for David Fincher’s “House of Cards,” including a mention for drama series. While they fell short when it came to series, Fincher took home the drama directing award, with the show winning additional Emmys in cinematography and casting, the first online-only television series to make its mark with the Television Academy.

From that point on, Netflix had at least one nomination in Outstanding Drama Series in each successive year, with “Orange is the New Black,” — which scored its nomination the year after being nominated in Outstanding Comedy Series — “The Crown,” “Stranger Things,” “The Bodyguard,” and “Ozark” all serving as bridesmaids, but never the bride.

In 2014, Netflix entered into a similar situation in Outstanding Comedy Series, with the aforementioned “OITNB” earning a nomination, to be followed in the years to come by “Unbreakable Kimmy Schmidt,” “Master of None,” “GLOW,” “Russian Doll,” “Dead To Me,” and “The Kominsky Method.” For better or worse, none of those series managed to take the top prize either.

Outstanding Limited Series is a different story. Netflix only waded into the hyper-competitive category in 2018 scoring its first nomination in the category for its first limited series “Godless,” created, written, and directed by none other than the mastermind behind the adaptation of “The Queen’s Gambit,” Scott Frank. Since then, the streamer has successfully protected its placement and each year since, scored a spot in limited series including, “When They See Us,” “Unbelievable,” “Unorthodox,” and “The Queen’s Gambit.”

But the frustrating part of Netflix’s Emmy journey is not that they’ve never been able to nab the most prestigious prizes. Rather, it’s the fact that other streaming services, smaller, less ubiquitous players, have broken through that ceiling, leaving Netflix behind in a puddle of shattered glass and fractured dreams.

The first cut of this stripe was almost the certainly the deepest and for good reason. The year was 2017 and all of TV emerged from the shadow of HBO’s “Game of Thrones” to play in the Emmy sunlight, as the ice giant slumbered between its penultimate and final seasons. If Netflix was going to take home the prize for Outstanding Drama Series, this was the year, and they had a doozy of a series as a contender.

In its first season, “The Crown” served as something of a balm in a tempestuous time. Debuting on Netflix just days before the shocking results of the United States Presidential Election, the show was the perfect escape from the suffocating rage that accompanied the mere suggestion of American politics at the time, by showcasing in exquisite form, the far better dressed fuckery of another country’s ruling class.

But there was another new series on the horizon, one that by pure chance had suddenly become the most politically and social relevant show in recent memory, both a constant reminder of our current quagmire and a call to action because, the series seemed to shout, the result of inaction is death.

Yes, with Hulu’s “The Handmaid’s Tale” appearing on the scene in April 2017, less than two months before the close of the Emmy eligibility window, “The Crown’s” goose was ultimately cooked. In September of that year, it was Hulu who became the first online-only content provider to win a series award at the Emmys.

And to rub salt in the wound, Amazon Prime Video went ahead and won back-to-back Outstanding Comedy Series prizes in 2018 and 2019 with “The Marvelous Mrs. Maisel” and “Fleabag,” so they, too, beat Netflix to the punch.

That was the past. This is now. And Netflix might finally be poised to again make history of their own.

The fourth season of “The Crown” has long been considered the frontrunner among dramas at the Emmy Awards, with the series seeing something of a return to form after wobbling a bit in recent seasons. Coupled with a field weakened by a global pandemic, it just feels like it’s finally “The Crown’s” moment to shine.

But perhaps more important is “The Queen’s Gambit,” the breakout limited series that blazed through the winter awards season. While it seemed a bit unclear whether or not that series would be able to hold on to its momentum as new competitors arrived on the scene, “Gambit” reasserted its strength at last weekend’s Creative Arts Emmy Awards, winning nine Emmys, far outshining not only its limited series competition, but every other show competing in this year’s awards.

In previous years, we’ve seen Netflix rack up Emmy nominations by the boatload, but struggle to translate that into wins when all is said and done. After the Creative Arts Emmys were distributed, though, Netflix had won 34, far more than any other streamer or network.

The writing is on the wall. This is Netflix’s year.

Now they just have to hope the Emmys aren’t announcing Outstanding Comedy Series first, lest Apple TV+ technically beat them to the Emmy series punch.

To hear more thoughts about Netflix’s night to come, tune in to this week’s episode of IndieWire’s TV podcast “Millions of Screens” with Creative Producer Leo Garcia and TV Awards Editor Libby Hill. Deputy TV Editor Ben Travers was unavailable to record this week so come see what happens when the adult is out of the (Zoom) room.

Plus, our final batch of Emmy predictions! Listen as Libby and Leo — serving as Ben’s proxy — make final picks for who will triumph at this year’s Primetime Emmy Awards, specifically when it comes to Limited Series categories. Plus, reports about all the most pressing parts of the Creative Arts Emmy Awards.

This Article is related to: Awards and tagged Emmy Awards, Millions of Screens, Netflix, Podcasts, The Queen's Gambit