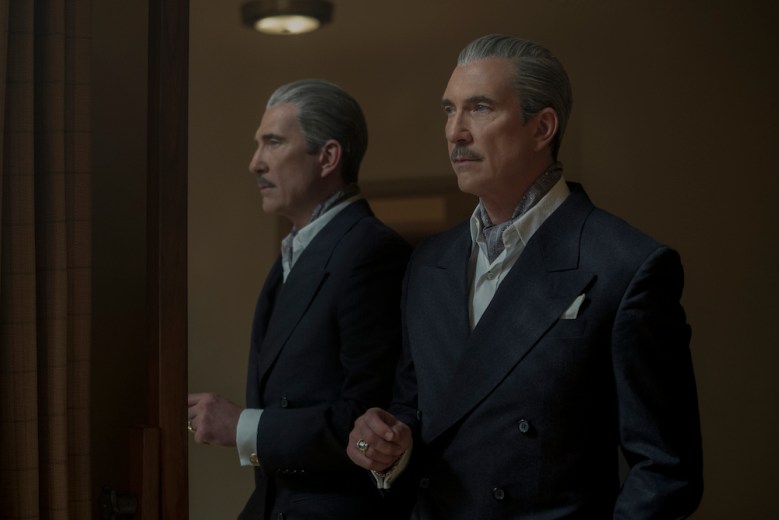 Acting teacher Sanford Meisner once said it takes 20 years to become a great actor, but two-time Emmy nominated actor Dylan McDermott — who studied under Meisner — says it actually takes about 30. And in the 30 years that McDermott’s been acting, he’s been everything from a dashing leading man, a charming cad, a television star, and a character actor. That latter term is how best to describe the role that secured him his second Emmy nomination in 21 years, playing gas station owner and a benevolent pimp to the stars in Ryan Murphy’s new Netflix series “Hollywood.”

“I read the first script of ‘Hollywood’ and I was shocked [by] the idea of Ernie, and this gas station, and the ‘40s,” McDermott told IndieWire in the video above. Loosely based on the life and (disputed) claims of Scotty Bowers, the actor says he’d vaguely heard about Bowers and the gas station he allegedly ran that was actually the front for a prominent same-sex brothel — but he didn’t know much beyond that. McDermott did his research, even sitting down to watch Bowers’ 2017 documentary “Scotty and the Secret History of Hollywood.”

McDermott says while watching the documentary he was struck by Bowers’ claim that he was “up for anything.” “We all look for that one little thing for the hook of a character and for me that was it,” McDermott said. But the term could also apply just as easily to McDermott’s own desire to jump into the character in the first place: “I was completely enamored [with] the script. I was like ‘Whoa, this is next level and [Ryan Murphy] said, ‘I want to change your career.’”

McDermott and Murphy have worked together since the 2011 debut of Murphy’s “American Horror Story” and the actor says their relationship works so well because of the trust they have in each other. With Murphy being so busy — not just spearheading new series but working in so many different capacities — McDermott explained that the director never has to worry about his ability to give a performance. It also allows for the pair to truly collaborate on a character.

In the case of Ernie, Murphy initially saw the character having a crew cut, but McDermott saw him as a more elegant figure, drawing on the likes of Clark Gable. He presented the idea to Murphy to make Ernie more of a representative of a bygone era — and the rest was history.

In terms of classic film influences, McDermott says he drew on several people, including Gable and Bowers himself, creating a character that “just took over,” he said. He knew he didn’t want Ernie to be a mustache-twirling villain, but a man who understands the struggles and dreams of the people he knows. “I wanted people to care for Ernie and understand this guy has feelings and dreams,” McDermott said. “He [Ernie] says, ‘I wanted to be a movie star’ and that’s really important because there are a lot of people who come to Hollywood and want to be movie stars, and end up doing radically different things.” McDermott says that’s another reason he’s thankful to still be working in the industry, especially considering how many Old Hollywood stories end with an actor just disappearing.

That gratefulness could also explain McDermott’s approach to his second Emmy nomination. “I kind of had let it go because I wasn’t on anyone’s list,” he says. The fact that it had been 21 years since his previous nomination, for his role as Bobby Donnell on “The Practice,” also led him to believe his time as an awards darling was over. “When you’re a young actor you think ‘Oh, this is the way it is. I’ll be nominated every year and that’s not the case,” he

He calls this second nomination sweeter, especially because it’s for working with Murphy. He doesn’t know what he’ll do on Emmy night, but for McDermott he’s just happy to be back at the party and utilize this nomination to further the character-based work he’s hoping to continue for many years to come.