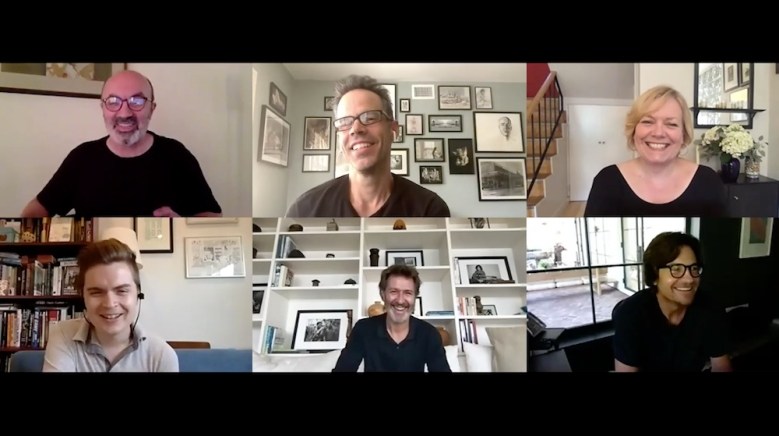 The opening sequence of “Ozark” Season 3 is unlike any previous entry in the Netflix crime saga, and not only because Marty (Jason Bateman) and Wendy (Laura Linney) are nowhere to be seen. Set in Mexico, far (but not far enough) from the Byrde family’s Missouri home, viewers were greeted with a cartel operative posing as a delivery man who proceeds to bomb a rival operation’s storefront. Like so much of Chris Mundy’s nerve-racking drama, the violent moment ratchets up the tension, and then the episode cuts to… a riverboat casino ad filled with star wipes?

“For a long time, the show started with a card that just said ‘violence in Mexico,’ and then the cheesy commercial with Wendy and Marty on the top of the boat,” editor Cindy Mollo said in a panel interview with IndieWire, adding that the third part of that sequence — when Wendy clicks over from the preview of the casino ad to news photos of the cartel war — was key to setting the opening’s tone. “You get into Byrde enterprises, and stills start to come up on Wendy’s laptop of the violence in Mexico, and we all realized if you had seen [the violence], it would hit that much harder. That’s sort of the cloud that hangs over everything that happens in the rest of the episode.”

Transitions like these serve a number of roles in “Ozark” Season 3. Showing the frightening reality hovering just outside the Byrdes’ lakeside bubble provides a sense of encroaching calamity. Meanwhile, shifting tones from criminal warfare’s bleak daily battles to a goofy, cheaply made advertisement that ends with two expert money launderers waving at the camera, well, it’s funny. And getting a chuckle out of the audience right before (or after) scaring them stiff makes the story feel that much sharper.

“There are just so many good quality and qualified people on our show that you just don’t need to worry about it landing,” executive producer, director, and star Jason Bateman said about setting that tone. “The toughest part is what Chris [Mundy] does, which is looking at a blank piece of paper — the options are endless, and that would be completely overwhelming for a small brain like mine. Once he says, ‘Here’s the recipe. Now you’ve got to go out and forage for all the ingredients,’ I’m not going to say it’s not that tough, but we’ve got a checklist, and Cindy’s got to cook it. So it truly is a big group who comes together to make this thing.”

The ambition behind “Ozark” Season 3 required the full team to execute at a high level, and their excellent work was rewarded when the Netflix drama earned 18 Emmy nominations in 2020. Showrunner, executive producer, and writer Chris Mundy was nominated for Outstanding Writing in a Drama Series (for the finale, Episode 10, “All In”); Alik Sakharov, who helmed the last four episodes of Season 3, landed a Best Director nomination (for Episode 9, “Fire Pink”); Armando Salas pulled in a nomination for Outstanding Cinematography (for Episode 4, “Boss Fight”); and Mollo was nominated for Best Editing (for the premiere, Episode 1, “Wartime.”) Meanwhile, Bateman earned his fifth Emmy nomination for acting, to go along with a Best Drama Series nomination for the show.

“We always think of the marriage first,” Mundy said about approaching Season 3. “It’s funny: I came out of the second season thinking, ‘I want to be 20 percent lighter, in terms of content.’ We’re a dark show, but Jason actually wanted the show to physically be a little bit lighter, too. We wanted to balance the humor a little bit more over the course of the season, [even though] as the season goes on, it gets heavier, so it’s harder to keep that. But we really wanted this to be a story of a marriage first and foremost.”

For as difficult as starting a new season can be, nailing the ending is just as challenging, if not more so. A critical moment came in Episode 9, “Fire Pink,” when Wendy has to pull over to the side of the road to process the fateful decision she’s just made. It’s a harrowing scene, with one heartbreaking shot of Linney weeping behind the wheel as cars drive by in the background, but there are lot of pieces that go into magnifying that climactic moment.

“I wanted to feel the anguish and that something just really blew up inside of her,” Sakharov said. “She’s feeling extremely alienated from everything, even from herself. But I also wanted to feel that she’s having a big conflict inside, but the life around her goes on. What was really important visually was to find the service road that runs alongside the highway, so that when she pulls over and goes through this really, really intense crisis, life around her doesn’t stop. Those cars are whizzing by in the background while this woman is having her scene. […] Her emotional breakdown is so tragic, and yet life keeps going.”

“Luckily, as everyone knows, really emotional scenes in cars driving at night are really logistically easy to shoot,” Salas said, with a laugh. “Along with coordinating actual traffic in the background — crossing cars so the headlights go across her face — we also had interactive lighting built alongside the van so that it would look like street lights were going by, and the light on her was constantly shifting and moving until she pulls over to the side of the road.”

Given how emotional Linney gets for the scene, Salas and the crew had to make sure everything would work perfectly before she was brought to set. Not only did they raise the van to provide a better shot of her breakdown, but the team went through exhaustive preparation and choreography to ensure smooth takes for the “magic hour” shoot.

“You know the actor is going to go really deep; Laura gives it 150 percent every time, so you really just need to have everything buttoned down,” Salas said. “You don’t want a [good] take to be lost because of technical issues. So we gave ourselves enough time to get out there, to do multiple passes of the road, to lock down the road, to practice the cars, to make sure the interactive lighting cues were all working, and so once Laura’s there, it’s all about performance.”

What may appear like a simple, poignant moment to the casual viewer actually took exquisite design by the production team, and they did it again and again throughout “Ozark” Season 3. Similar preparation was required for the season finale’s climactic (and bloody) shot, which you can hear all about in the video above. Watch it for more in-depth explanations for “Ozark” Season 3’s biggest moments.

Consider This: Conversations highlight television’s award-worthy productions through panel discussions with the artists themselves. The above video is presented by Netflix and hosted by IndieWire’s TV Deputy Editor and Critic Ben Travers. “Ozark” is streaming now on Netflix.