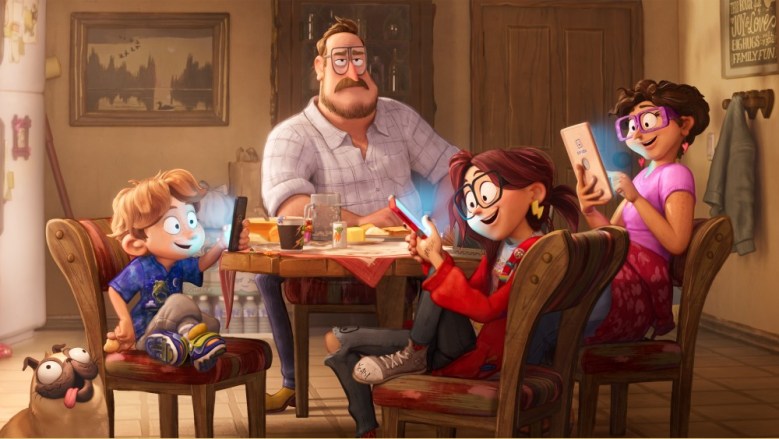 IndieWire launches Sketch to Screen, a new behind-the-scenes exploration of cutting edge animation that kicks off with Oscar contender “The Mitchells vs. The Machines” (Sony/Netflix).

From Oscar-winning producers Phil Lord and Chris Miller (“Spider-Man: Into the Spider-Verse”) and first-time director Mike Rianda (“Gravity Falls”), “The Mitchells vs. the Machines” offers a handmade, watercolor aesthetic that perfectly matches the wild road trip about a family fighting the robot apocalypse, while also contrasting them with the sleek perfection of the AI-created robot world.

Rianda was encouraged by the boldness of “Into the Spider-Verse” to make his debut even more ambitious: “The reason we wanted the movie to have a hand-drawn look is because when you see a drawing, you see all these little imperfections and…places where the pen goes, that you wouldn’t expect it to,” he said. “And it just feels really natural and organic. And our characters are natural, organic, imperfect. And they’re up against this perfect AI that can do anything. We wanted every sort of character to look like it was drawn by a person and we wanted that feel of the human hand.”

That human touch was provided by production designer/character designer Lindsey Olivares, who made drawings in a watercolor marker style containing heavy linework that could be rendered into CG animation. But the art department allowed details to drop and bleed into the background to look more like 2D. “So you’re seeing the grid of a paper in a watercolor way,” she said. “But it’s not romantic or nostalgic…we’re just beautifying our real world and the kind of painterly look really help bring it in.”

Translating Olivares’ artwork into animation meant breaking down every image to figure out the rules. Sony Pictures Imageworks responded by innovating a new outlining tool for highlighting the illustrative character forms, and a new shader tool for moving characters through light as they layered and integrated all of the watercolor strokes.

In contrast to the organic, messy, tactile human world, the robot world is stark, minimal, and open, and the backgrounds evoke frustrating isolation. “We would model things differently where, in the robot world, it was very sharp, very smooth, very reflective and glossy,” said VFX supervisor Michael Lasker. “Then we took our Mitchells characters and had to stick them in that robot world and they still had to work, so all of our styling in our render script we had to just tone down.”

But when it came to creating the killer Stealthbots, known as Pal Max Prime, Sony’s animation supervisor Alan Hawkins revisited a concept he toyed with at Ringling College of Art and Design, based on boolean algebra. He proposed a new way for the Stealthbots to morph as they moved, by slicing and reassembling. Two new tools allowed the Stealthbots to be deconstructed and rebuilt differently every time they moved. One tool allowed animators to draw any line through the character, then cut it in half and fill the gap with the internal coloring of that shape, while the other tool helped create negative space inside the character. These could now be combined to produce an infinite number of shape combinations and designs.

“I remember Alan Hawkins showing us that first test,” said producer Miller. “What if they moved like this? And my reaction was: ‘I never would’ve thought of that at all. That’s really awesome.'”

If there is one aspect that defines the free-form, handmade quality of “The Mitchells,” it’s Katie-Vision, which takes us into the creative mind of the aspiring filmmaker. “I talked to Lindsey early on about doing collage stuff in the movie, like kids doing YouTube stuff,” said Rianda. “But we couldn’t figure out a way to actually stick it in the movie itself until we realized that Katie’s a filmmaker. We should make it so she’s the one editing the movie you’re watching. And that was this big breakthrough for us.”

To create this student film vibe, they mixed different types of 2D animation with stock photos and sock puppets and bad green screen. “It felt really honest in a way that it was imperfect, which we were trying to celebrate,” Olvares added. “And so we started finding it in her films, tracking different colors and the pacing. And it evolved. Visualizing it and finding pieces that worked, it became a bigger piece throughout the film.” Olvares led the small Katie-Vision team, which collaborated closely with the animators.

In the beginning, though, they didn’t know if Katie-Vision was going to work or be a distraction. Thankfully, the handmade aesthetic offered the necessary through line. “It’s Katie’s movie, and so she was going to be able to put her own spin and style line, and add this stuff on top of it,” said producer Lord. “And all these little homemade doodles and mixed media crafts was something that we thought was going to be fun and then it ended up blending really nicely. So much of the film is about trying to see the world through the eyes of an 18-year-old girl.”