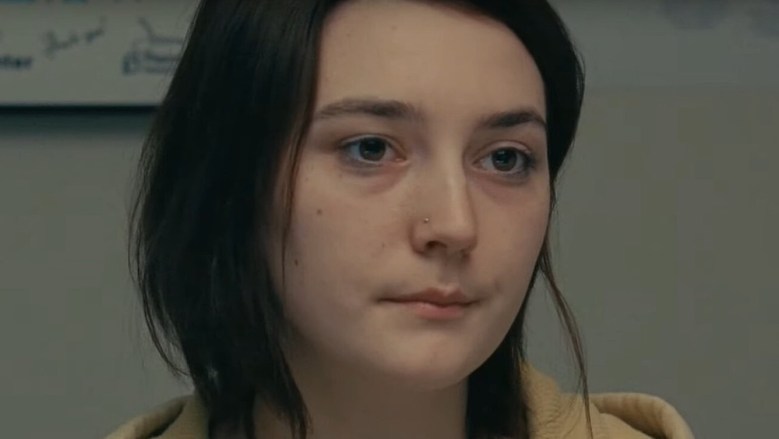 For Flanigan, the 2020 Sundance Film Festival represented her first time to fly outside New York. That was soon followed by Flanigan’s first international flight to the Berlinale, where she walked the red carpet and director Eliza Hittman won the Silver Bear. Flanigan earned the Best Actress Award from the New York Film Critics Circle; the movie, Flanigan, and Hittman are all up for Critics Choice and Independent Spirit Awards. Oscar nominations could be next.

It’s an improbable ending to what was always an improbable film. It took Hittman seven years to make the movie, which began as the story of two rural Irish nannies who bond when one gets pregnant. That yielded no funder interest, so she shifted the narrative to the U.S. with two small-town teenagers traveling to a big city to obtain an abortion.

Hittman was at Sundance 2017 with “Beach Rats” when Donald Trump was inaugurated. Abortion would be under increased fire, which made Hittman realize that now was the time to make this movie. She was right: It was easier to finance her pitch and she found support from Cinereach and the BBC. Focus Features acquired distribution rights right before production began.

When if came to casting, Hittman wasn’t finding who she wanted in Pennsylvania or in Hollywood. She remembered Flanigan, who was 14 when they met in 2013 at a backyard wedding while Hittman’s husband and editor Scott Cummings was shooting his documentary short “Buffalo Juggalos.” Over the years, they saw Flanigan mature and perform on Facebook videos under the name Siddo.

The filmmaker wanted an actress who had lived and whose face could hide nothing. “I didn’t want the character to feel like a wispy ingenue,” said Hittman in our Zoom talk (above). “Sidney has a vulnerability and strength. You have to be able to feel both sides.”

When Hittman and Cummings first contacted the 20-year-old on Facebook, she said she was busy. They convinced her to read the script, then meet on Skype, and finally audition. “It’s not something I do,” Flanigan said. “It was a super-bizarre thing to show up in my life. I wasn’t expecting to see a story about abortion, about this young woman that felt honest and not fake. I immediately wanted to be part of something like that. I was terrified to jump into this whole new world and do something I didn’t know I could do.”

Before production began, Hittman and cinematographer Helene Louvart flew Flanigan to Manhattan and captured her on city streets, subways, and the Port Authority bus terminal. They used that video to make the producing partners comfortable with casting a rookie actress. “The first time we put the camera on her, she was a completely competent actor,” said Hittman. “It was not an easy shoot, to put the weight of a movie on someone’s shoulder who had never done it before and wasn’t sure she wanted to do it… It’s not easy to be number one on the call sheet with everyone looking at you for 27 days.”

Flanigan was a natural, acting opposite (and leaning on) another Buffalo native acting on film for the first time, theater actress-dancer Talia Ryder (“Mathilda”). The 48 hours the girls spend in New York waiting to be accepted for an abortion make them easy prey for older men. “They’re faced with obstacles along the way,” said Hittman, who immerses the audience into her character’s point of view. “They have to have interactions with other men. Wherever they may be there’s always that feeling of claustrophobia, of always being on alert. It was important to me that all these spaces feel on some level unsafe.”

In a key scene, Flanigan breaks down in the office of an abortion counselor who presents the intimate-partner questionnaire that inspired the title. Hittman put the actress opposite real social worker Kelly Chapman, which helped to create a safety zone. “We had to build to that place emotionally,” said Hittman, “and build trust and confidence. You feel that Sidney has arrived in this safe place after this fraught, long journey.” She told Flanigan to just answer the questionnaire honestly. “That started the track from a more personal place,” said Hittman, who used an entire 16mm reel and printed the first take.

“I tapped into my vulnerable places and my own experience,” said Flanigan. “It felt like an environment where I could harness those emotions and let them be there.”

Flanigan has already landed another role in Matthew Kaundart’s psychological drama “My Twin Is Dead.” She doesn’t believe she’s come this far, after “dealing with the total fear of not knowing whether or not I was doing acting right,” she said. “There were times when I felt that I wasn’t sure I belonged there or not. That’s totally normal when you are trying things. If something doesn’t scare you a little bit, it isn’t going to be exciting.”