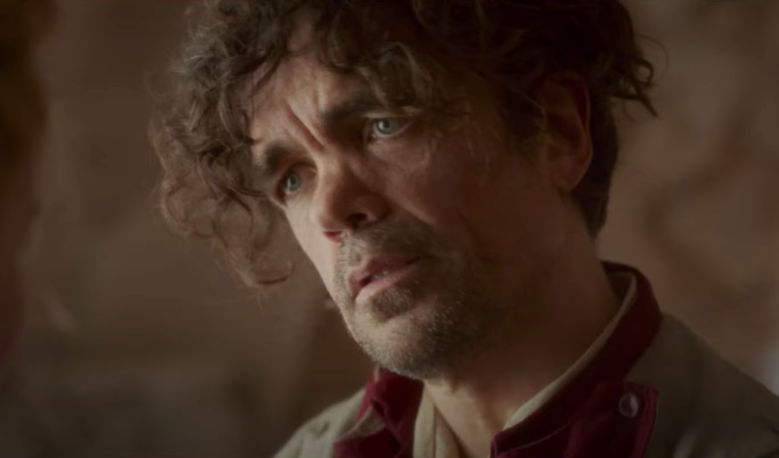 “It didn’t speak to me until Erica did her version of it,” said Dinklage in our video interview (above). “She did the risky thing by getting rid of the nose and adding music from The National, who I had been a huge fan for years. She did super-stylized, slow-motion speed ramp fights that worked beautifully. Erica’s spirit inspired Joe.”

The actor had always been turned off by the idea of “a handsome actor with a fake nose,” he said. “When [Edmond] Rostand wrote it 120 years ago, it was ahead of his time — irreverent, fun, and lovely. It was known for this nose, but there’s a beautiful play lurking underneath. When you get rid of the nose, what are you left with? Who we really are. You could say my size is a substitute for the nose, but I never thought of it like that. DeGuiche [Ben Mendelsohn] and his minions had to call me freakish and all of that, but it doesn’t take over my character nor as a person in life. It’s more of a physical aspect.”

With Wright, Schmidt adapted her musical for the screen with Dinklage and Bennett as the stars while expanding the scale, setting it in the 1600s, and paring back the music. “Joe wanted it to be more cinematic,” she said on the phone. “I see the movie as completely different. It is his telling and retelling of what I did onstage.”

In Schmidt’s “Cyrano,” the character writes witty love songs so the less-witty Christian (Kelvin Harrison, Jr.) can sing to Roxanne, whom they both adore. “The songs are about unrequited love, and simultaneously, these grand notions of self,” Schmidt said. “The idea was to have the character not talk about what they feel is unlovable about themselves. We all feel something about us is hideous. The things that make Peter right for this role are his intelligence and his wit and facility with language. He has something in common with this character: ‘I don’t trust you’ll see me for who I am.’ Which is different from feeling unlovable.”

Wright said he was fascinated by the idea of Dinklage playing Cyrano, “and by Pete and Haley’s chemistry, because they’re such very different types of actors. Haley’s more Method. Pete’s a very technical actor with an enormous soul. I wanted to create a space for Pete to lay down his defenses and allow the gentler, simpler side of himself out, and allow him to be a romantic lead, which he was wanting, but was scared of.”

In August 2020, the production formed a quarantine bubble in the Medieval town of Noto in Sicily. For most of the cast and crew, it was the first time that they stepped on a set in nine months. “Even before the pandemic, we are a circus troupe,” said Dinklage. “We live in a bubble with each other. As we are all doing it together in these places far from home, we hold on to each other. The pandemic… made the walls of the bubble that much thicker. We were literally and spiritually hungry. It had that rebellious quality to it: ‘Let’s get this done despite the odds, let’s solve things creatively given the confines.’ That was liberating.”

By his own admission, Dinklage is not a singer. “I was taking that leap of faith,” he said. “The key for me is to sing as yourself, sing from your soul. Good or bad, it will be you, honest and raw. That set me free — as long as I didn’t sing flat! Every singer is an actor, every actor is a singer, spiritually.”

Dinklage was relieved he didn’t have to wear plumes. Because it’s a musical rather than an historical drama, costume designer Massimo Cantini Parrini “could take liberties,” said Dinklage. “You want to have some form, but then you can play loose; you want to tell the audience where they are and be playful with it at the same time. We mixed and matched.”

Dinklage was delighted to be able to see the movie debut at Telluride with an audience. “It is one of those movies you shouldn’t watch alone, not on a laptop. Seamus McGarvey doesn’t shoot movies for laptops. You shouldn’t pause it. Movies are watched now over a period of days. It should be an immersive experience. I’m old-fashioned, 52 now, trying to adapt to the new world… The drawback is watching it on laptop and not sharing it with strangers.”

As Cyrano writes a letter in a bakery, expressing his feeling for Roxanne, the bakers start dancing. “The soldiers are brutish and raw and start dancing together like lovers,” Dinklage said. “It’s beautiful. I wish that’s how all wars could be fought.”

Next up: Since “Cyrano” the actor has wasted no time getting back in front of cameras, with two indies (“American Dreamer,” “Hitpig”) and two Legendary projects (a “Toxic Avenger” remake and  “Brothers”) in the pipeline.