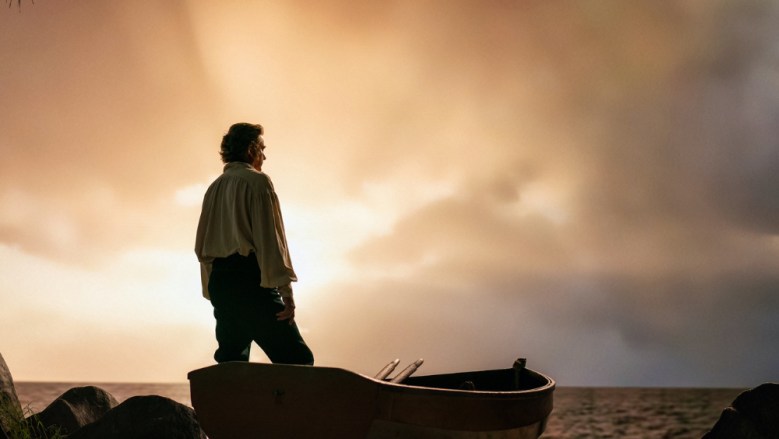 “Our Flag Means Death” is a great many things all at once: it is a workplace sitcom, it is a period piece, it is a pirate adventure, it is the most ostentatious midlife crisis any protagonist has ever had, and it is a romance featuring straight and gay pairings right across the spectrum. In the video above, show creator David Jenkins and director/star Taika Waititi discuss creating a look for the show that balanced its Age of Sail setting with its comedic and theatrical sensibilities, as well as their innovative use of a moveable, 30-ft high LED screen wall to simulate the ocean on set.

“This was first time I’ve seen a [volume set] so big that it actually moves as well and where you could move the camera around so freely,” Waititi said. “You know, we’d done a lot of that on ‘Mandalorian’ and even ‘[Thor:] Love and Thunder,’ but this was a very free use of the volume because we had live-action oceans out there and everything just felt like it was the perfect use.”

Watch Jenkins and Waititi break down creating the anti-pirate movie look in the video above, or read excerpts from their discussion below.

You can listen to the full discussion above, or via subscribing to the Toolkit podcast via Apple Podcasts, Pocket Casts, Spotify, or Overcast.

Taika Waititi and David Jenkins on designing the look of the series:

Waititi: Early on, we talked about whether or not it would be authentic right down the line and I like the idea of the ship being as authentic as possible and being as real as possible and having all of the details there, and then it’s great for the actors and it’s just visually, it’s really lovely to see — you never see anything that has that scale and it looks expensive and it’s also funny. Like, it’s like when people say, ‘Oh, we’ll make a comedy,’ and it’s like, you have $5 to do it. And then the boat just looks crappy and it’s like some ’80s comedy where it’s one barrel and two bits of rope and one bit of railing and that’s it and the set never changes. And the angle never changes because it’s front of a live audience.

But having a ship that we can move around anywhere we wanted and look in any direction and be as cinematic as we wanted or as plain and make it look as boring as we wanted: we had all of those choices. And I think it’s really great when, especially with comedy, if you can do that. Like ‘What We Do in the Shadows”: In the film we wanted to have a space where we put a whole lot of detail into [that space], and then essentially just made a boring comedy about flatmates. And we had the same set designer from that film that who did ‘Our Flag,’ Ra Vincent, and he’s brilliant at that. And it freed everything up, I thought.

And also with the characters, ’cause the characters that David had created, a lot of them are pretty outlandish and quite extreme. And so that space can’t be too crazy. It’s gotta be the real world that you insert those characters into, even like the wardrobe and stuff. And you’ve got a lot of freedom there. Like, even with Blackbeard, you know, like going, ‘Okay, he’s basically Mad Max, but on the high seas. He’s a biker. A sad biker.’ It just makes sense when you put it into that world. But if suddenly you just push that too far and the props and the locations and the sets feel really contemporary as well, then you kind of break it.

Jenkins: I think the thing that was important to me, just in prepping it before we started shooting and when we were building it, I just wanted to throw as much stuff at it to kind of destabilize the pirate stuff, because pirates — it all looks the same. It’s always like damp wood and like white shirts and it’s always really beautifully done and it’s often shot dark. And so to just go like the opposites where we have such a good DP, Mike Berlucci, he is absolutely incredible. And starting with him and saying like, ‘Okay, let’s not use any seafaring references at all.’

And we actually ended up looking more like “Inherent Vice.” Really beautiful shots [and] “Jaws” and that kind of like Spielberg ’70s, ’80s kind of desaturated but very romantic in a way [look]. To me, those are things that I haven’t seen in a pirate thing before, but for whatever reason, it made me feel like, ‘Oh, we’re near the ocean.’ That kind of like West Coast light, even though it’s not right for the Caribbean, there’s something romantic about it. This a midlife crisis this guy is having. So it has to be kind of romantic on some level.

Waititi: The lighting does have that very LA feel. I’m in LA right now at magic hour and you know, I’m in the Valley and that’s PT Anderson’s wheelhouse. He makes this place look beautiful and you know, the shittiness of a boat and the monotony and just that world: if it can look beautiful from time to time? It also plays into the romance novel feel of this whole thing where, you don’t wanna do it all the time, but now and then there’s earned little moments, mainly between Blackbeard and Stede, where it suddenly turns into a Mills & Boon cover, you know? And it’s like the sun is too big, you know? Or the full moon is way too big and unrealistic, but in their minds, that’s what it looks like.

Taika Waititi and David Jenkins on the series ambitious use of VFX:

Jenkins: I mean, I feel like we didn’t even realize that we had to grapple with water.

Jenkins: Yeah. They’re like, ‘Oh, cool. We love the script. It’s picked up. Write a bunch of episodes.’ And then you’re like, I [put] no thought into like how we were gonna shoot it.

Waititi: And then you find out shooting on the water and shooting on boats is probably the hardest thing and the most time consuming thing and laborious and dangerous thing to do.

Waititi: And just bad luck. I talked to Russell Crowe about this on ‘Master and Commander.’ And he was saying, ‘Man, you’d be days at sea, shooting nothing.’ You know, you’d just be stuck out there. And then [you’d find] like perfect light. And then a hurricane would just turn up and then you’re like, ‘Nope.’ And then everyone would be like getting jet boats back to shore, hoping not to, like, drown.

Jenkins: I mean, I don’t even know how you do a reverse [shot] because like the weather’s changed by the time you’re gonna turn around. I don’t even know why it didn’t — of course they shot “Master and Commander” on the water, but it’s mind-boggling to me that they did that, now, just talking about it right now. It would be so hard. So in terms of, you know, you’re writing a comedy, you’ve gotta move fast. You have X amount of days to do this, to diffuse this bomb, there’s this script. And it quickly became like a thing that we could do this thing called volume, which is like how they do ‘The Mandalorian.’ Except, like, I saw an interview thing you did, Taika, and you were talking about how you actually don’t really get to be on an entire set a lot of the time. Is that true, with the ship and the screen and everything? Is it normally just like pieces of set?

Waititi: Yeah. Yeah. Normally. And [with ‘Our Flag Means Death’], that’s the first time I’ve seen a set so big that it actually moves as well and where you could move the camera around so freely. You know, we’d done a lot of that on ‘Mandalorian’ and even ‘Love and Thunder,’ but yeah, this was a very free use of the volume. And I guess also, because we had live-action oceans out there and everything just felt like it was the perfect use. It’s the perfect application for what we needed.