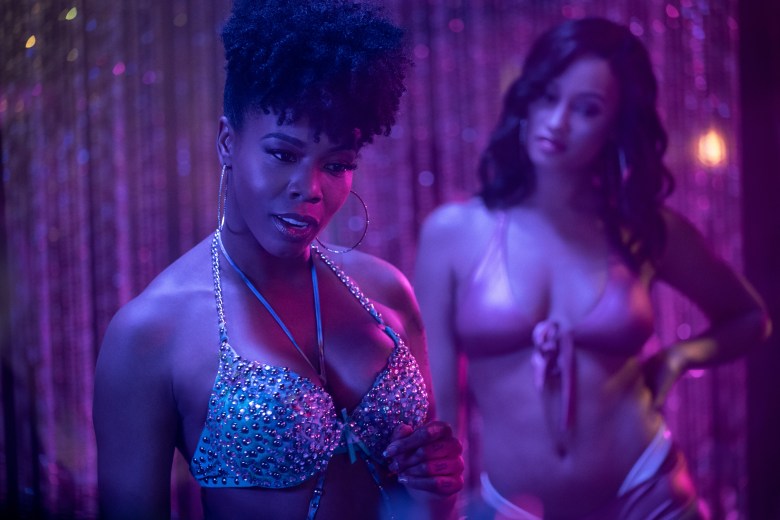 The press notes for Starz’s new series “P-Valley” describe it as “Trap music meets film noir.” While that might seem like an unusual delineation, when audiences see the series on July 12, it will make sense.

It definitely has noir qualities to it: It’s very atmospheric, with taut, no-nonsense dialogue, a woman with a mysterious past, multiple femmes fatale, cynical heroes, stark lighting effects, flashbacks, intricate plotlines, and more, but with a very southern-fried twist. “P-Valley” is a series unlike anything that has ever been on television, and creator/showrunner Katori Hall knows this very well.

“I embrace the juxtaposition of light and shadow, and I always knew that I wanted to have a visual nod towards noir, but the unfortunate thing about noir is that Black folks haven’t really existed in noir,” Hall told IndieWire. “And if we do, or if any POC does, it’s very peripheral or it’s a stereotype, and I really wanted to basically take that genre and smash it and use it to my own specific purposes. So just using the tropes of noir and subverting them was so fun and something that makes the show super unique.”

Based on her play “Pussy Valley,” the series’ official synopsis reads: “Down deep in the Mississippi Delta lies an oasis of grit and glitter in a rough patch of human existence where beauty can be hard to find. This hourlong drama tells the kaleidoscopic story of a little-strip-club-that-could and the big characters who come through its doors — the hopeful, the lost, the broken, the ballers, the beautiful, and the damned. It dares to ask what happens when small-town folk dream beyond the boundaries of the Piggly Wiggly and the pawnshop.”

This Article is related to: Television and tagged Direct, Katori Hall, P-Valley, Video