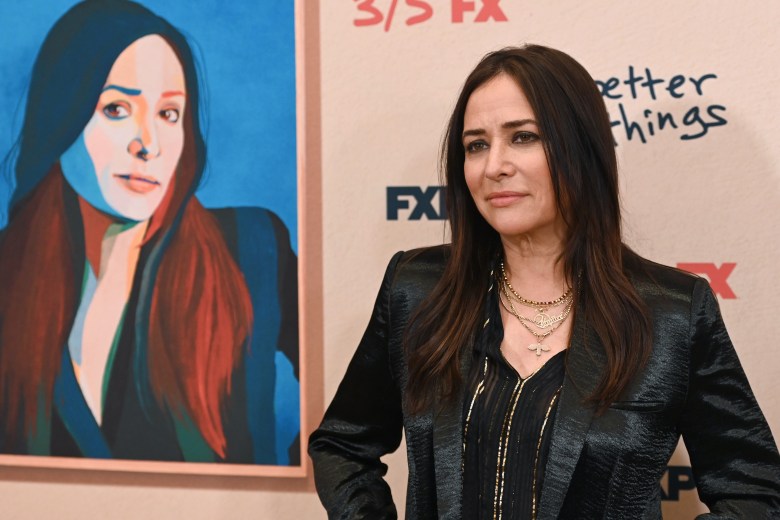 It’s a little disconcerting to Zoom with Pamela Adlon while she’s in lockdown. The “Better Things” mastermind calls in while seated on her couch, in front of a wall of portraits and paintings done by her grandmother, Phyllis Leece, many of which have made appearances in the background of the series itself.

The blurring of lines between reality and fiction has been a hallmark of the FX show since its debut in 2016, which centers on Sam Fox (Adlon) raising her daughters, Max, Frankie, and Duke (Mikey Madison, Hannah Alligood, and Olivia Edward, respectively) and the family’s sprawling community of friends and loved ones. If you’re wondering how representative that is of Adlon’s real life, when we spoke in April she was well into her first month of quarantining with all three daughters and, as a bonus, daughter Rocky wandered through mid-interview, stopping by to love on her mom and say hello.

It’s no surprise then to learn that Sam’s love and affection for Los Angeles, as evidenced in a beautiful sequence taking place in the first half of the “Better Things” Season 4 finale, comes straight from emotions born in Adlon’s own heart.

“That episode is my love letter to Los Angeles and to all the people who keep us going,” Adlon said of the sequence, which features Sam attempting to escape Dodgers Stadium in a timely fashion and make her way home across the city, accompanied by two children. “You see all the immigrants who are such a huge part of the city. I originally wanted to call it ‘City of Angels’ because that’s what it was.”

Though raised in New York City and Los Angeles alike, it was the latter that served as the soil for Adlon’s filmmaking roots, the place where she’d feed the voracious appetite of her creative curiosity and unconventionally educate herself on the ways of becoming a master craftsman.

“My first apartment was in West Hollywood,” she recalled, where she lived down the street from a video rental place that served as her higher education when her hopes of attending NYU’s film school failed to materialize. “I went to Video West and I rented every single movie they had. And that was my education. That was me, from the time I was 19 to the time I was 22, I had seen every Bette Davis movie, every film noir movie that I could get my hands on, all the Cassavetes movies, of course all the Woody Allen movies, and Buñuel and Truffaut.”

But that wasn’t where Adlon’s education stopped, and it’s this secondary source of knowledge that may provide key insight into the creator’s unparalleled ability to infuse even the most unpleasant situations with profound humanity.

“I had this weird compulsion to record everything and document everything and save everything,” Adlon said, reminiscing about her vast collection of Interview magazines that she eventually discarded because it had become, in her words, “a hoard.” “I still have closets full of video cassettes and I would record the L.A. riots, fires in L.A., different commercials, Angelyne made a music video, all of it on video tape. It’s nuts! That was what my brain was doing.”

As creator, writer, director, and star of her series, Adlon has the utmost control over the message her series puts out into the world, but that messaging can only go so far, and she seems well aware of the limits of an auteur’s vision.

“You can’t try to do the right thing,” she said, and made reference to her expansive art collection. “I started buying art when I was a teenager, and one of the first pieces I bought, someone told me how they saw this figure, and I got upset. I was like, ‘No, that’s not what’s happening in that painting,’ and I realized it’s up to people’s interpretation.”

But she added, regardless of a person’s point of view, “I do know that if you start to write away from something that’s real and you say, ‘Well, I really don’t want to write about that. That makes me too uncomfortable,’ it’s not going to be as good.”