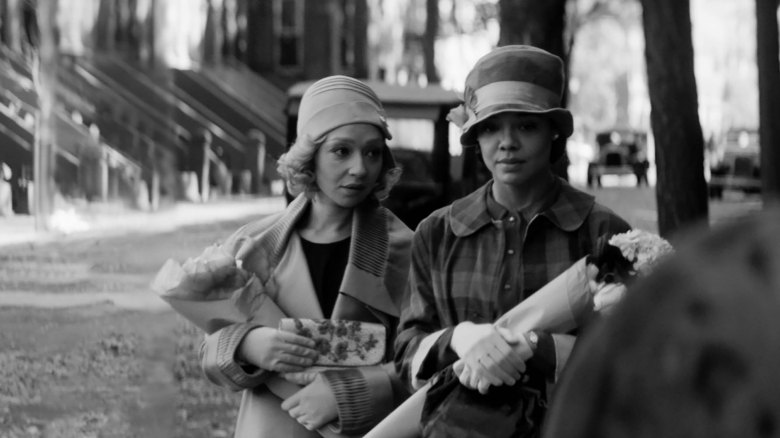 “Passing,” which just world-premiered at the Sundance Film Festival, has a lot of tricky boxes it checks: it’s the directorial debut of actress Rebecca Hall, it’s a black and white Harlem Renaissance adaptation shot in the 4:3 Academy aspect ratio, and it’s a story about Black women in 1920s New York whose light skin allows them to pass as white.

Hall, alongside producers Margot Hand and Nina Yang Bongiovi, recently joined IndieWire and partner Canada Goose for a panel with IndieWire’s own Kate Erbland to discuss this intimate period piece out of the U.S. Dramatic Competition section at Sundance. Hall’s own complicated racial background made her the perfect, if unexpected, choice, producer Yang Bongiovi said, to direct the film.

“I was very frank with her. I said, ‘I think it’s gonna be an issue, because we really champion filmmakers of color. And I’m very nervous about you taking on this role, especially about colorism and everything else that comes with passing,'” the producer said of their first meeting. “That’s when she revealed to me her maternal side of the family. Her mother is actually African American, and her grandfather was passing back in the day because of light skin.”

Yang Bongiovi continued, “While she was having that conversation, I pretty much got goosebumps and I was stunned, because there’s no one more perfect to tell the story of passing. And then furthermore, she showed me her notebook of her storyboards. She storyboarded the entire movie by hand — super impressive — I was really blown away by her talent, her grace, her thoughtfulness, her approach on how to do this movie, and how to do it right.”

Hall said she first read Nella Larsen’s 1929 novel “Passing” when she was roughly 25. “I was thinking a lot more about my [family] relationship that I had not been born or grown up in but was increasingly living in, and witnessing, and observing, and also my mother’s position in that,” Hall said. “I come from a family where there was a history of African-American white passing, [with] my grandfather and most likely his parents also. When I read the book, there wasn’t really language for that in my family. … It’s very mysterious. There are lots of moving factors.”

The movie centers on the relationship between Clare Kendry (Ruth Negga), a Black socialite who is actively passing while living in Chicago with her white (and outwardly racist) husband John (Alexander Skarsgård). Early in the film, she reunites with her old school friend Irene Redfield (Tessa Thompson), also light-skinned but living in Harlem with her husband Brian (Andre Holland).

Hall said, “Not only did the book strike a chord with me, I was very moved and had a deep understanding of these women. I also had a context for the first time in my life for this aspect of my family history. I could put a name onto it because the stuff that I did know added up with a lot of historical aspects of this particular thing going on. For all of these reasons, I was very moved by it.”

The process of script-writing, though, Hall said was a challenge. “I didn’t really know what I was doing so I shut the book and banged it out in 10 days,” the actor-turned-filmmaker said.

Producer Margot Hand had worked with Hall as an actress on films like “Tumbledown” and “Permission” and has long been in awe of her creative skills. “She’s very annoyingly good at everything,” Hand said.

As for the casting, Hall said Negga was perfect for the role of Clare because “Clare is described in the book as always [having] this golden hair … so we were like, ‘We’ve got to go blonde. We’ve got to push this. She sent me a photograph of a time where someone had stuck a wig on her years ago for something and then didn’t follow through with it. And it was mind-blowing, actually, to see that image.”

As for Thompson, Hall said she was worried the actress would be unattainable due to her busy schedule. But thanks to executive producer Angela Robinson, a phone call was able to be arranged that left Hall “bowled over,” and Thompson was cast as Irene. “She is so erudite, so smart. Her analytic capacity as an actor is remarkable,” Hall said.

Hall said that while filming in black and white may seem on the nose, it serves a distinct purpose for the storytelling (and is not to mention achieved elegantly by cinematographer Eduard Grau), while also allowing the director to cast Black women in these roles.

“I couldn’t conceive of a better way to tell a story about colorism then taking all the color out of it. And to put it sort of tritely, but there’s this sort of, if you’re operating from a place of obstruction, you’re drawing attention to categories, you’re drawing attention to the falsity of those categories, but also the importance of them, and how the world is dictated by that,” Hall said.