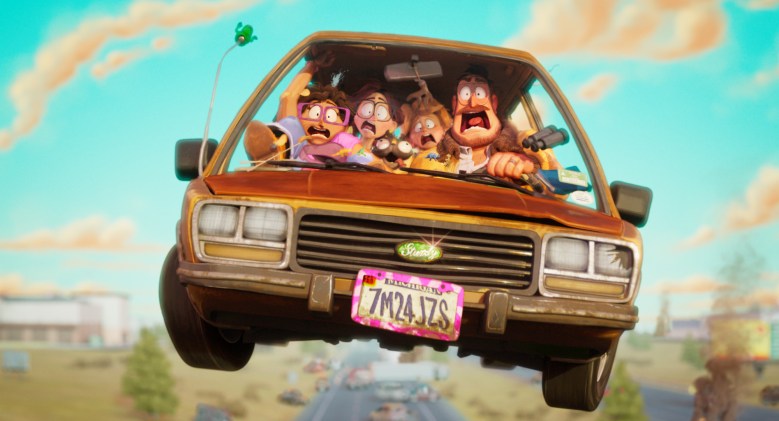 Chris Miller and Phil Lord juggle multiple projects; they say “no” to many others. While editing “Spider-Man: Into the Spider-Verse,” they became producers of “The Mitchells vs. the Machines” (Sony Pictures Animation/Netflix). What made rookie filmmakers Mike Rianda and Jeff Rowe’s animated family comedy different — beyond the proximity of their editing bays?

“We do say no to lots of things,” said Miller in our video interview (above). “But when we come across something that feels special and we can contribute creatively to it, it gets us excited. It felt like us back in the time when we were making ‘Cloudy with a Chance of Meatballs,’ making our first movie. When we saw what Mike was working on, we could tell he was a special talent, someone who understands how to make things funny, which is hard, and he also understood how to tell an emotional story, which is rare.”

After three years, they delivered a movie that earned raves and is the current frontrunner for the Best Animated Feature Oscar — which Lord and Miller won in 2019 for “Spider-Man: Into the Spider-Verse.” They’re now finishing part one of the sequel, “Across the Spider-Verse,” for release this fall.

“Nothing we’ve ever done seems like a good idea the time,” said Lord. Now, he said, he’s figured out that what you learn breaking the rules on one animated film leads to being able to break more on the next.

“The Mitchells vs. the Machines”

Rianda leaned on his producers to develop the animation tools needed to achieve his goal of a handmade, scruffy-looking movie about imperfect humans — based on his own dysfunctional Salinas, Calif. family. The movie adopts the student-film, garage-band aesthetic of its 17-year-old narrator, aspiring filmmaker Katie Mitchell (“Broad City” star Abbi Jacobson) who’s on a cross-country road trip to college with her brother (Rianda), her mom (Maya Rudolph), and her Robertson head number 4 screwdriver-wielding dad (Danny McBride).

Rianda and the producers put each scene under a microscope, trying hundreds of ideas. “It was a process of evolution,” he said. “As some things die, other things grow, and we’d find that things were getting closer to what we were shooting for.”

Miller said Rianda’s lofty ambition to avoid a hyper-realistic look changed the way animation was done. “It doesn’t have to have realistic pupils, the homes don’t have to look like showrooms, but messy and lived in,” he said. “They could feel homemade and like watercolor illustrations.”

“The Mitchells vs. The Machines”

Production designer Lindsey Olivares came up with a “handmade wobbly analog look,” said Miller, “that is really hard to teach a computer how to do.”

“Lindsey’s artwork emphasizes your imperfections, things about yourself you want to cover up, like bigger ears,” Lord said. “She celebrated the individuality of the characters instead of trying to shave off those things. We have a movie where that choice has been made over and over again, taking the little things that make people wonderful.”

Lord said he views the computer in the same light as a pencil or a paintbrush. “The three of us are dedicated to making films,” he said. “Animation is an experimental medium from the jump. Every animated film is an experimental film. It’s supposed to reveal and highlight our humanity.”

“The Mitchells vs. The Machines”

The animators leaned into their actors’ improvisation. Olivia Colman voiced PAL, the sidelined computer villain who launches a robo-apocalypse only the analog Mitchells can subvert; every morning, Rianda gave her new lines to see what she’d do with them. “Every line she was hitting out of the park,” he said.

In a universe where filmmakers debate how many beads of sweat to use on someone’s forehead, “when an actor stumbles on a real uncanned moment, it’s a magical thing you have to preserve,” said Miller.

The analog Mitchell family lives in a world “where nothing is perfect,” said Lord. “In the PAL universe, everything is symmetrical and it feels like it’s shot by David Fincher.”

Lord and Miller said “Mitchells” fed their work on “Across the Spider-Verse.” “It’s been fun to have the confidence,” said Lord, “to go even harder and push the medium even further and take Miles [Morales] to places you couldn’t imagine.”