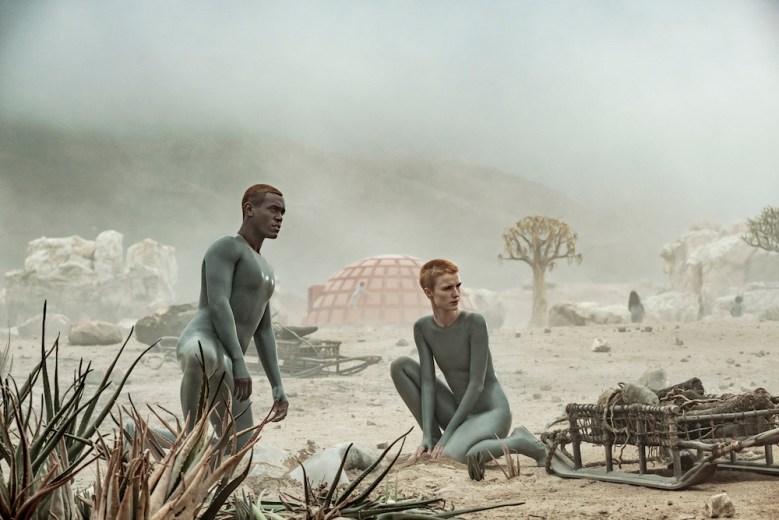 Consider This: Conversations highlight television’s award-worthy productions through panel discussions with the artists themselves. The above video is presented by HBO, produced by IndieWire’s Creative Producer Leonardo Adrian Garcia, and hosted by Chris O’Falt.

“We were looking for an arid landscape,” said production designer Chris Seagers. “We didn’t know exactly what we wanted.”

Seagers met only once with Scott before he was scouting locations in South Africa. Forty five minutes outside of Cape Town he found an old vineyard halfway up a mountain — it was so high up that the clouds moved eerily over the peaks, as can be seen in the pilot episode’s opening. Three days later, Scott would fly down to the abandoned vineyard to see if it would work.

“And of course once you start looking at stuff, off he goes [and] suddenly Ridley started drawing out what he’d seen, how he wanted it to work,” Seagers said, who in just a week after the initial meeting with Scott in London started construction on the South African location. Construction vehicles would be brought in to remove the topsoil and transform it into the sand-and-rock covered dystopia.

The hard-to-reach location of The Settlement, the series’ main location, would dictate many of the decisions of how each department on the show would work. Visual effects supervisor Raymond McIntyre Jr. would have to figure out how to transform that 360-degree real-life settlement set into most of the series’ other exteriors. In total, the series would have 3,700 VFX shots, but oftentimes the starting point for would be something practical on set. For example, the spacecrafts would be built on location, McIntyre Jr.’s job would be to make them seamlessly take off and land without the benefits of a soundstage blue screen.

“Ridley comes from a time in the 1980s when you couldn’t do as many things with visual effects that you can do today, so coming up with inventive ideas of how to do things in-camera was really important,” McIntyre Jr. said. “And now we’re in 2021, and you can do a lot more with visual effects, but you should always start with something real and augment, [rather] than start with something fabricated.”

The visual effects supervisor pointed to the suits Prosthetics Designer Jaco Snyman developed for the creators. “Jaco built this really beautiful suit that we put on this stunt person, and we had the stunt person act all the moves that the creature did, including fighting with Mother, and wrestling with Father,” McIntyre Jr. said. “We replaced him with a digital creator, but what it gave us in post is real world how the light hit the skin of the creature, the shadows of that creature onto the ground, the interaction and cloth movement on the person it is moving with. Those things you can’t replace — that real interaction of light and shadow are just irreplaceable.”

In the above video, each of the panelists talked about the emphasis Scott put on having something practical on set, not only to get the lighting and look right, but for the actors to interact with and make the action more realistic and to unify characters’ eyelines. Snyman points to Episode 6, where Mother (Amanda Collin) drains the blood of androids. Snyman breaks down how he created the prosthetics of the android Karl, and how vital it was for the dramatics of the scene that the android not be a CGI creation.

Yet so much of the action in “Raised By Wolves” is still dependent on visual effects. Very often, Editor Jennifer Barbot was left to cut dailies that simply have the location and cast and not the big visual effects element driving the scene. Barbot said that part of the brilliance of the series work flow is how Scott, the three editors, and the core visual effects team are all on the same floor throughout post-production — constantly walking in and out of each other’s offices to get on the same page. Barbot points to the tunnel scene in the series finale as a prime example.

“We had to add the spaceship going down the big tunnel in Episode 10 — there’s nothing there — in order for the director Luke [Scott], to visualize it, and give notes — add shots or move shots, or cutting it shorter, or changing it in some way,” said Barbot. “[Luke] has to see an example of what it looks like, so we had a really great in-house team that could work with us.”

You can see for yourself in the above video how this resulted in an incredibly edited scene where the emotion, tension, and action in the Season 1 climatic moment is brought seamlessly together with visual effects.

This Article is related to: News and tagged Consider This Panels, Direct, HBO Max, Raised by Wolves, Video