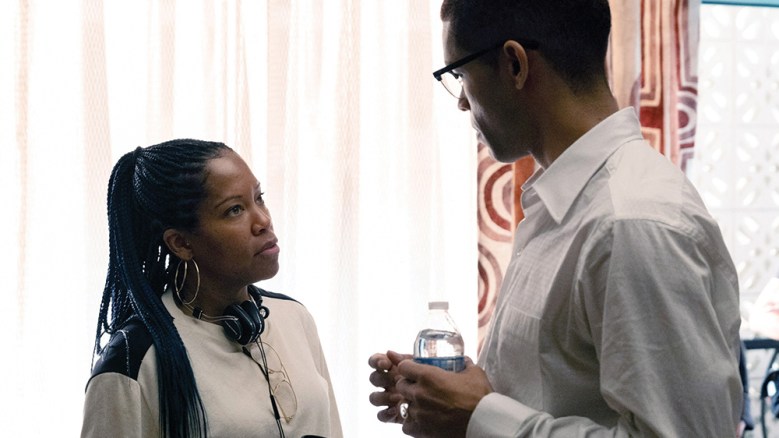 After a rousing Venice premiere, Regina King’s feature film directing debut, “One Night in Miami,” emerged as a surefire Oscars 2021 contender. When the director couldn’t fly to Venice during the pandemic, she anxiously checked in with an old girlfriend who was there to find out how the movie played. She needn’t have worried. “I woke up the next morning to her text,” said King in our Zoom interview (above). “She videotaped the reaction, it was a blow by blow with texts as people were reacting. That’s how I found out.”

“One Night in Miami” could be the right film at the right time. Adapted by Kemp Powers from his Olivier Award-nominated play, the movie is set on the sultry Miami night in February 1964 when Cassius Clay (Eli Goree) defeated heavyweight champion Sonny Liston. The movie takes us inside the boxer’s celebratory after-party with pals Malcolm X (Kingsley Ben-Adir, “The OA”), Sam Cooke (Leslie Odom Jr., “Hamilton”), and Jim Brown (Aldis Hodge, “Clemency”) as the men debate the best ways to use their respective stardom to affect change in the segregated South.

Malcolm X is struggling with Elijah Muhammed and the top brass at the Nation of Islam, checking the lamps at the Hampton House for bugs, and criticizing pop star Cooke for catering to white folks. (They go toe-to-toe in a tense exchange that pays off late in the movie.) Peacemaker Brown reveals that he’s starting to act in movies. And Clay is sneaking swigs from Cooke’s liquor flask as he makes up his mind to announce that he, too, is a Muslim.

“One Night in Miami”

All four men are so strong in this provocative debate about the role of celebrity in African-American politics that the movie easily scored a coveted SAG Ensemble nomination which is often a presage to a Best Picture nomination; Odom, Jr. has landed Supporting Actor from the Globes, Critics Choice, and SAG. Odom could follow singer-actors Mary J. Blige and Cynthia Erivo with a dual nomination for acting and Original Song, for rousing closer “Speak Now.” (He could win.)

If King scores a Best Director slot for her elegant directing of this testosterone-charged talk-fest, she’d be the sixth woman and the first Black woman nominee in the category in 92 years. So far, the continuously diversifying Academy has failed to anoint such contenders as Ava DuVernay (2014’s “Selma”) and Dee Rees (2017’s “Mudbound”). And this year, her fellow Golden Globe and Critics Choice Award directing nominee Chloe Zhao (“Nomadland”) could also join the list.

It may be King’s time. Like any actor-director Oscar contender, from Robert Redford (“Ordinary People”) to Greta Gerwig (“Lady Bird”), she gets a celebrity boost on the popularity scale, and has been on a roll, taking home her first Oscar for Supporting Actress for Barry Jenkins’ “If Beale Street Could Talk” (after not landing a SAG or BAFTA nomination) and winning four acting Emmy awards, most recently for her kick-ass role in HBO’s popular limited series “Watchmen.”

Also coming into the awards zone is screenwriter Kemp Powers, who could be nominated in the same year for adapting his own play “One Night in Miami” and also co-writing “Soul,” Pixar’s original movie about a jazz musician (Jamie Foxx) caught between two worlds. (Powers could follow Francis Ford Coppola’s double nomination in 1974 for “The Conversation” and “The Godfather Part II.”)

King has been preparing to direct a feature film for years, having directed a dozen television episodes (sometimes directing herself), one documentary and one TV movie. “Oh yeah, directing television was my film school ,” she said. “Being an actress as long as I’ve been, all the wonderful artists I got to work with — directors, production designers, wardrobe designers — that was a bit of school I wasn’t aware that I was learning and taking the information in. Once I decided I wanted to be a director as well, TV was a safe place to begin to apply those things I picked up along the way. Even with all that preparation, the directing of my first theatrical film was night and day, different in a lot of regards.”

As soon as she read Powers’ screenplay she saw the film she wanted to make. “It started off on the page, with Kemp’s script,” she said. “It was there. I feel like that’s always been true for me as an actress as well. Sure, there are tweaks and adjustments and scene cuts and additions you may make along the way. But the heart of the story starts in the writer’s hands.”

When she set about finding her cast, “it’s about casting actors you trust,” she said, “who are amazing and have similar expectations as you, and want to embody these icons. All four actors never at any point were interested in an imitation or impersonation. They went into their minds, hearts, bodies, and souls.”

King remains grateful for all the people on the production side who made it possible for her to shoot “Watchmen” and prep “One Night in Miami” at the same time, even when there was some crossover. She’d fly to New Orleans on Thursday night from Atlanta to scout locations on the weekends, returning Sunday. “It does take a lot of scheduling,” she said. “I have a great team.”

King knew directing a movie would be tough, but “it is so hard,” she said. “Every day was challenging, every single day minute. I got very little sleep. There were some days, it was like you’d look at what was to come: ‘How are we going to get it all done in this amount of time?'”

Perhaps the biggest challenge in making a movie largely set in one contained space was keeping the dynamics going during an often heated debate. “We’re in that hotel room for quite a bit of time,” she said. “That took four days. [One scene] was 14 pages. The one on the roof was 12 pages, and we were dealing with weather issues as well.”

She encouraged the actors to dig behind their alpha male personae. “All four of these men are so different in just their approach to life,” she said. “I always stressed to them throughout, to remember the humanity. People see pictures of them and think they know them. We haven’t really explored the themes behind the image. To take the time to capture those vulnerable moments that every human has, that men more often than women are not comfortable with exposing, this is an opportunity, because you are not exposing it outwardly, you are exposing it within this comfortable space with your brothers. What does that look like? We kept coming back to that place. They were very open and appreciative of me bringing them back and reminding them. It was constantly not playing the obvious beat but the nuanced moments.”

The film’s vivid, saturated color palette was influenced by Barry Jenkins’ “If Beale Street Could Talk,” King said: “While I didn’t want it to look like a TV show, it was stylized in the way the blues and the reds and the greens were saturated. It was pleasing to your eye as well.” Another influence on the film’s blue and gold look was the painter Jacob Lawrence, as well as Wong Kar Wai’s “In the Mood for Love.”

The actual location of the event, The Hampton House, “had that bright yellow Miami color,” she said. “Let’s tone it down and lean into the Miami of it all, with the neon we had throughout.”

Like many successful people, King tends to be an anxious overachiever, and she’s grateful to her editor, Tariq Anwar, for helping her to not obsess, as a rookie director, over “what I may not have gotten,” she said. “At the beginning he would say, “Regina, if I think you missed something I will call you. You will not let them strike the set.'”

Next up: Starring opposite Idris Elba in western “The Harder They Fall.” “It works well for me to go from directing to acting,” she said. “I need to be able to focus on something else so I am not obsessing about something I’ve already done. That can drive you crazy.”

This Article is related to: Awards Spotlight Winter 2021 and tagged awards spotlight winter 2021, One Night in Miami, Regina King