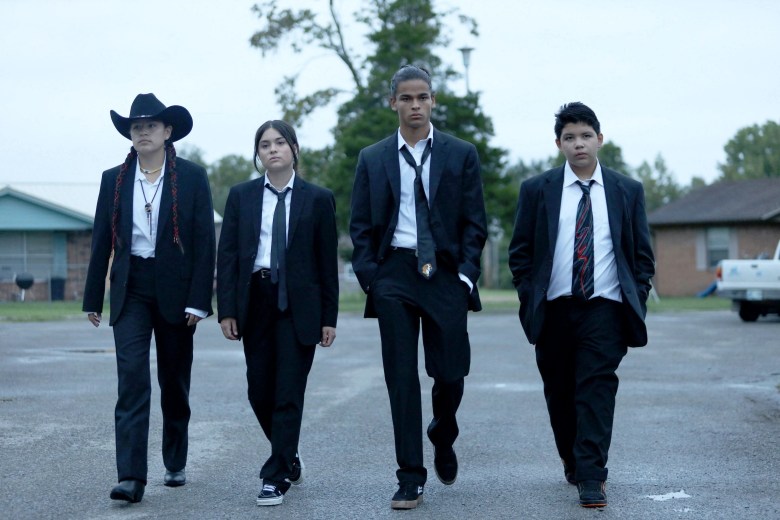 FX on Hulu welcomed a new series into their stable of high-quality comedy programming this week with the premiere of “Reservation Dogs.” Created by Sterlin Harjo and Taika Waititi, “Reservation Dogs” follows four Indigenous teenagers as they go to great lengths to earn money so they can leave their rural Oklahoma home in the dust.

Based on experiences from Harjo’s own time growing up in a native community in Oklahoma, the series deals in hyper-specific scenarios in the lives of the Native American teens — a memorial service for a fallen friend, waiting for care at Indian Health Service — rarely ever depicted on screen, much less in a comedy.

But even more than that, “Reservation Dogs” offers a window into a world many people don’t understand, and worse, don’t care to think about. At least, that was my experience.

Growing up in South Dakota, the plight of Native Americans wasn’t even an elephant in the room. Digging into the history of the land was incidental in the education system, generally shunted off into a special week of broad lessons that boiled down to “using every part of the buffalo” and caring little for the ongoing occupation and devastation of Indigenous communities and sacred lands. It was only when I came of age and removed myself from that culture of latent racism and manifest destiny apologia, that I was able to see how backward my upbringing had been and how much effort was, to this day, being expended to erase the lives of Indigenous people.

Which is all to say that “Reservation Dogs” is an opportunity to center these communities in the spotlight, and the series makes the most of it. But it does so without falling into the trap of generalizing — making a single entity of an extremely diverse segment of the population. This is a story not of life in every reservation small town in the country or every Native American in the United States. It’s a story about these kids, growing up in Oklahoma, worried about their future, yes, but also just being teenagers.

It’s difficult to feel empathy for people you have trained yourself not to see, something too many Americans have done with Native American communities. “Reservation Dogs” isn’t trying to be representative of anything. It’s just trying to be itself. And through that, it becomes something really special.

Also, it’s just really fucking funny. Maybe I should have mentioned that sooner.

If you’re looking for a new show that blends the sincerity of “Freaks and Geeks” with the language of Quentin Tarantino — as we all obviously are — this is the series for you.

For more about the premiere of “Reservation Dogs,” the renewal of HBO’s “White Lotus,” and the Season 2 finale of FXX’s “Dave,” tune in to this week’s episode of IndieWire’s TV podcast “Millions of Screens” with Deputy TV Editor Ben Travers, Creative Producer Leo Garcia, and me, TV Awards Editor Libby Hill.

Then stay tuned as we do our best to sway Emmy voters by stumping for some of our favorite unsung nominations before voting opens next week.

This Article is related to: Television and tagged millions-of-screens-94, Podcasts, Reservation Dogs