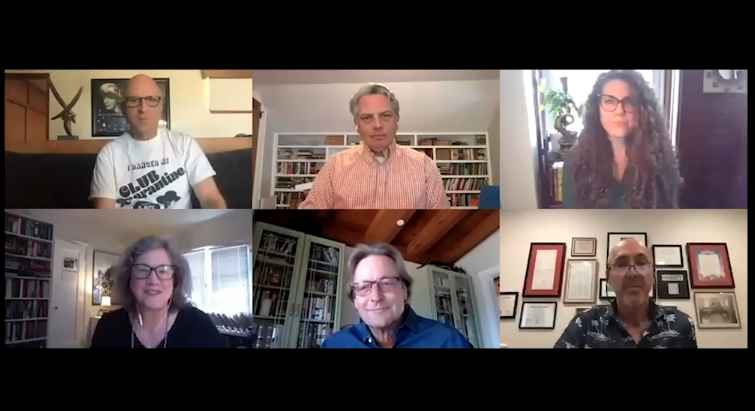 As communities around the country reopen stores, restaurants, and businesses amid the ongoing pandemic, indoor theaters are slowly ramping up. For starters, the film industry is carefully monitoring San Antonio’s Santikos Entertainment for best practices, according to our one-hour “Return to Theaters” webinar last week.

Check out the (slightly edited) video of the full panel (above) as we talk through likely scenarios for getting back to showing movies on the big screen. Highlights from our discussion are below.

It’s going to be a slow process, warned Ted Mundorff, President and COO of Arclight Cinemas, who applied social distancing at his Los Angeles theaters for five days before the shutdown and is still debating the best way to keep moviegoers apart: sell limited tickets to assigned seats, or let customers figure out where to sit before they remove their masks to eat their popcorn?  In any case, theaters may be a quarter full, and it will be tough for them for make up lower attendance on the weekends.

As theaters book retro movies to get started, variable pricing and changing deal terms “are all open,” said Picturehouse CEO Bob Berney (“Fatima,” August 14). “Distributors are glad to have something playing.” Landlords also need to be flexible about leases, or many theaters will not be able to open, said Mundorff.

There just aren’t enough of them. Some 350 drive-ins will continue to do the lion’s share of the business around the country — as IFC Films reports box-office results for six pandemic releases, including top-performers “The Wretched” — and we can expect more drive-in pop-ups as well.

L.A. is likely to get up and running before Manhattan, said John Vanco, Senior Vice President, IFC Films and General Manager, IFC Center, which won’t open until given the green light by Governor Andrew Cuomo. That may or may not be in time for Christopher Nolan’s time-travel thriller “Tenet,” which the panel was hopeful Warner Bros. will open, if not on July 17, soon thereafter.

How quickly international cinemas open around the world will also factor in Warners’ decision, said Dori Begley, Executive Vice President, Magnolia Pictures. The New York distributor has led the way by booking such films as “The Whistlers” and “Once Were Brothers” via virtual cinemas, sharing most of the proceeds with theaters. While this has proved a surprisingly successful strategy during the pandemic — better for films that were already pre-branded by theatrical release — the long-term results of this experiment are yet to unfold.

While arthouse cinemas are nimble and able to evolve, theater chains frown on day-and-date bookings, even when they benefit communities that lack a local arthouse. That’s a subject of intense debate. “We’re listening,” said Begley.

Some exhibitors don’t want to dilute their offerings. Unlike commercial studio releases, which can play off in four to six weeks, specialty films need to run in theaters for a long time, said ex-Landmark Theatres chief Mundorff, who reminded that 2019 and early 2020 did not deliver strong numbers for independent films, runaway hits like “Parasite” excepted. “We needed ‘Moonlight’ to go for 16 weeks.”

Vanco and Aronson are hoping that the National Association of Theater Owners (NATO) will help provide guidance for theater safety protocols, even as each community faces distinct local ordinances. The film industry should actively share ways to build community support for theatergoing, said Begley. “We need to propagandize and evangelize.”

While Universal has touted its swift pivot to premium video on demand for such films as “Trolls World Tour” and “The High Note” (Focus Features), in normal times, it has not been proven that VOD is the best way for a studio to recoup a significant negative investment, said Aronson. “In the indie world, with more specialized films, there’s good money to be made.”

As for ancillary windows shortening post-pandemic, that won’t be the only change coming. “Windows schmindows,” said Aronson, who worries some big-city movie ticket prices could be too pricey during an economic downturn, when massive home entertainment is cheap. “For anybody who is involved in this industry who thinks the status quo pre-covid 19 is going to be maintained, they have news coming to them. Because nothing is going to be the same…If everybody in the industry doesn’t examine and reexamine how everything is done, it’s a recipe for failure.”

This Article is related to: Video and tagged Box Office, Tenet, Theaters, Video