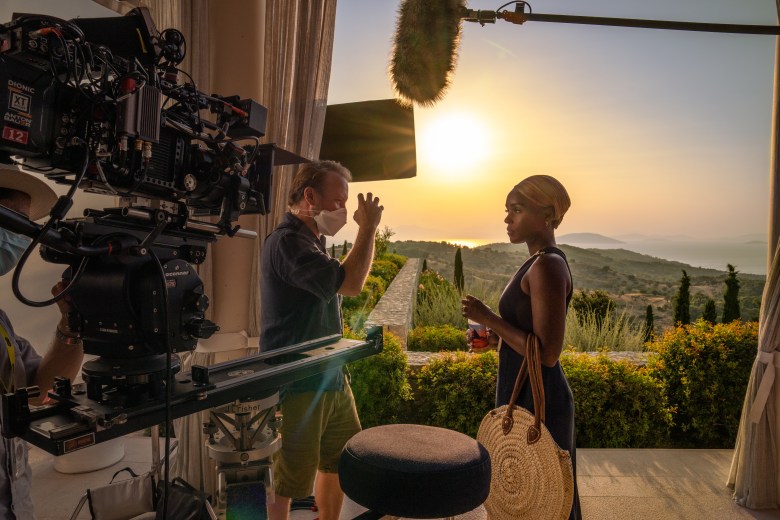 The collaboration between writer-director Rian Johnson and Janelle Monáe on “Glass Onion: A Knives Out Mystery” didn’t only came from a place of mutual admiration. It stemmed from the filmmaker needing a star that shared many of the same complex narrative building skills that has hooked millions of Netflix viewers into his inventive whodunnit.

The character Cassandra “Andi” Brand, a tech visionary betrayed by her closest friends, contains multitudes that informed the casting process. “I needed a collaborator to come in and work with who wasn’t just stepping on set every day and playing the reality of the scene,” Johnson told IndieWire, “but who could really think like a storyteller, and who could really think about the place in the whole of every single piece of this thing. And my god, [Monáe] did that. She came in and she gave so much nuanced thought to differentiating the different aspects of this character.”

Johnson and Monáe hopped on Zoom for IndieWire’s Awards Spotlight series to unpack how they were able to pull off a twist that had the actress “blown away” when she read her script. “I did not see [it] coming,” said Monáe. “I was like, ‘Oh, he’s innovating in this space.’”

As Johnson described it, what first got him rolling on writing the “Glass Onion” script was “the idea of this half and half structure. And that led very quickly to the notion of the main character essentially playing two roles.”

For the first half of the film, Andi mostly looms in the background as her former friends, played by Edward Norton, Kate Hudson, Dave Bautista, Kathryn Hahn, and Leslie Odom Jr., question why she’s in attendance at their private Greek island getaway. At the film’s midpoint, when it looks like Andi has been shot dead, it is revealed that the group’s betrayal actually became fatal over a week ago, when someone seemingly staged Andi’s suicide shortly after she had told them she had the smoking gun that would expose the lies she told about them. The person we have actually been watching admonish the group (and get shot) is Andi’s sister Helen, who is also the one who invited Detective Benoit Blanc (Daniel Craig) on the excursion.

In order to keep track of the different masks she wore in “Glass Onion,” the performer took notes in three different journals. “I kept one for Helen, with all her scenes, one for Andi, with all her scenes, and one for when Helen was pretending to be Andi, for all those scenes,” she said. Though it was a tall task to stay so organized, having to bounce between all the different points in Andi and Helen’s arcs, Monáe found joy in working all the math out with Johnson. “We would talk about stuff down to the parts of their hair—what part Helen’s hair was, what part Helen [had] pretending to be Andi,” she said. “What side that was on is totally different from the side of Andi’s because she was in the mirror parting her hair. So she thought it was on the left side when it was supposed to be on the right side, or vice versa. You gotta watch it a few times to see what we did. But we had so much fun putting easter eggs in for the audience.”

Through Helen’s story, “Knives Out” fans also learn more about what kind of detective the series protagonist is. “Blanc has a moral center,” said Johnson. “He’s not Sherlock Holmes, he has emotional skin in the game usually, and sides with somebody that he likes.”

While the filmmaker sees it necessary to always have a character tied to the mystery that serves as a companion to Blanc, Monáe was quick to dispel any notions of playing the prototypical “Bond girl” in a movie starring the most recent actor to play 007. Monáe laid out what makes Blanc different. “If you listen to how we’re interacting with each other, he’s listening to me, he’s giving the credit to me,” she said. “It wasn’t like ‘Blanc is here to save the day.’ So I mean, maybe a Blanc Girl, but maybe a Helen boy.”

Watch the full discussion between Johnson and Monáe above.

“Glass Onion: A Knives Out Mystery” is now available to stream on Netflix.