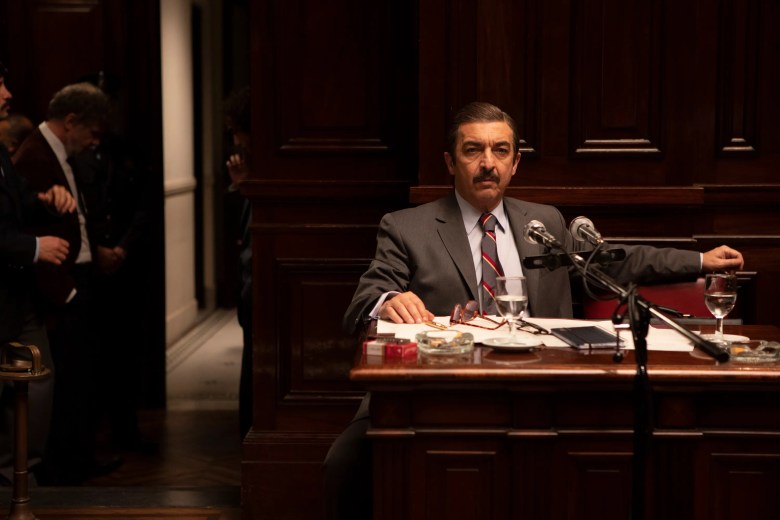 Filmmaker Santiago Mitre was traveling to the Venice Film Festival with his new courtroom drama, “Argentina, 1985,” hoping that his real-life account of how the country prosecuted leaders of its military dictatorship would remind younger generations of its dark past.

He arrived at the festival, however, to reports that modern-day Argentina wasn’t exactly in a stable place, either: On September 1, a 35-year-old man attempted to assassinate Vice President Cristina Fernández de Kirchner outside her Buenos Aires home, only failing because his gun jammed when he pulled the trigger. “It was something we thought was impossible to happen,” Mitre said in an interview with IndieWire for its Consider This International series. “It gave us a perspective about the relevance of the film that we didn’t know before.”

That’s because “Argentina, 1985,” the country’s official Oscar submission, makes the case for believing in the justice system in lieu of outright civil war. The movie revisits the Trial of the Juntas, in which a team of lawyers led by the quirky expert prosecutor Julio César Strassera overcame public controversy and death threats to oversee a successful high-profile trial that enabled the country to confront its recent past. Often considered Argentina’s own version of the Nuremberg Trials, Strassera’s case was emboldened by the way testimonies played out on television, bringing the horrible details of military persecution to the public in real time.

“I realized there were so many people who did not remember this event, which was so important for the building of a new democracy after the horrors of the dictatorship,” Mitre said. The 40-year-old director was only four years old when the trial took place, but his mother, a lawyer, spoke about it often. “It’s something that’s connected to my roots,” he said, adding that she met Strassera on several occasions. “She spoke to me about this weird, funny, grumpy character,” she said. “I had the intuition that there could be a film about him.”

To fill that role, Mitre turned to one of his regular collaborators — and Argentina’s most celebrated working actor — Ricardo Darín. Over the past several decades, Darín has starred in some of the most widely acclaimed Argentinean movies, from “Nine Queens” to the Oscar-winning “The Secret in Their Eyes.” He also starred in two of Mitre’s previous films, “The Summit” and “White Elephant.”

But this was the first collaboration that forced him to think about a past he remembered in vivid detail, as Darín was already a successful TV actor when the Trial of the Juntas took place. He recalled the duality of the country, in which the excitement over a new democracy was pitted against the recent trauma of the dictatorship. “The expression of happiness from society during that time was accompanied by some of the challenges that the government had to face,” Darín said. “The possibility of taking the juntas to court was, at the beginning, surrounded by certain skepticism and a lot of caution.”

In order to play Strassera, Darín studied footage from the trials, but Mitre allowed the actor to build out his own interpretation of the character. “We concluded that we were going to allow ourselves to enter a space of freedom and imagination,” Darín said. “We did not want to create a copy or mimic Strassera’s personality.”

However, in other ways, Mitre aimed for historical accuracy. The filmmaker shot many scenes in the actual courtroom where the trial took place and interspersed them with archival footage that aired on television. However, those broadcasts hid the faces of witnesses during the trial to protect them. Mitre, drawing on transcripts from the testimony, brings the victims out of the shadows. “We thought that the right point of view was to be looking at the faces,” he said, “to see the pain, the anger, what they were feeling at that moment.”

Darín, who co-produced the movie with his son Chino Darín, said that he remained invested in supporting movies about Argentinean identity. “Somos Argentinos” — “We are Argentineans” — he said, continuing with the help of a translator. “We want to tell stories that are meaningful, that represent who we are,” he said. “This is the fundamental reason why we keep doing what we’re doing.”

At the same time, he noted that the story of a country struggling with dictatorial impulses wasn’t unique to Argentina, and that the U.S. was itself vulnerable to such threats. “The United States is not immune to this,” he said. “This is a universal statement. We all know that every country is facing their own problems, and I humbly and respectfully believe that our film brings some light to what is right and what is wrong.”

Watch the full interview with Mitre and Darín above. “Argentina, 1985” is now available on Amazon Prime.

This Article is related to: Awards and tagged Argentina 1985, Consider This International, Ricard Darin, Santiago Mitre