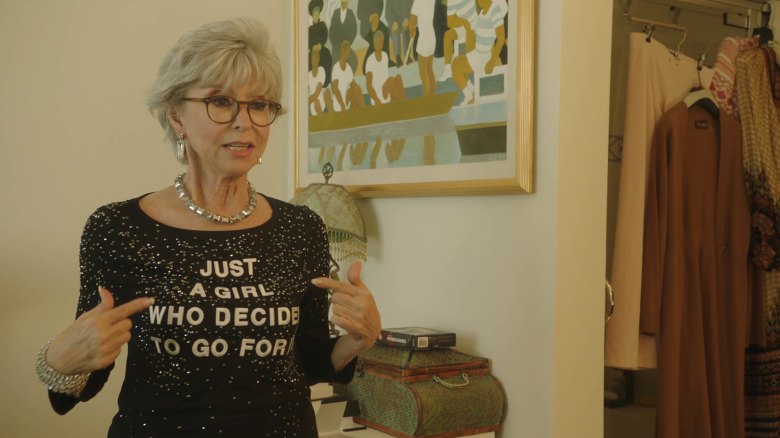 That a documentary on the immeasurably influential and widely talented Rita Moreno, an EGOT with a staggering 70-year career, didn’t exist until this year is at once preposterous but typical of the entertainment industry. As director Mariem Pérez Riera puts it, the reason boils down to Moreno being a Latina woman in Hollywood whose contributions and constant reinvention haven’t always been fully appreciated much less celebrated.

Pérez Riera’s definitive film “Rita Moreno: Just a Girl Who Decided to Go for It,” which premiered at the 2021 Sundance Film Festival, covers the storied life of the Puerto Rican star from her hometown of Humacao on the island to the highest echelons of fame, including an Oscar win for playing Anita in 1961’s “West Side Story.” Her hard-fought success, however, came with abuse, debasing parts, and subsequent inner turmoil.

Producer Brent Miller, who’d worked with Moreno on the sitcom “One Day at a Time,” set the project in motion after reading her autobiography, “Rita Moreno: A Memoir.” Assuming she might have had multiple offers over the years, he asked if she’d be interested in a non-fiction feature about her life, to which the actress replied that, astonishingly, no one had inquired before. From that conversation a year passed for all elements to come together.

“When I finally said yes, one of the very first things I asked for was a woman director and I said, ‘Of course if we could get someone who is Hispanic, it would be just joyful for me. I think it would be very important for the documentary,’” Moreno said during a virtual Q&A as part of the International Documentary Association’s annual screening series.

Pérez Riera, also the mother of Marcel Ruiz, who played Moreno’s grandson on the show, submitted her pitch to Miller with a curious concept that used animated paper dolls illustrating the duality between the confident and negative sides of the actress, her own Dr Jekyll and Mr. Hyde: Rita, who wants to be, and Rosita, her less favorable traits personified.

“I realized that Rita, for almost all of her life was pretending to be someone she is not and was playing whatever everyone wanted her to play and that’s that paper doll, it has a neutral face and whatever you put on it becomes that new character,” noted Pérez Riera.

Taken with this conceit, Moreno also approves of the director’s decision to include academics and other personalities to contextualize the complex cultural eras she lived through, especially her early years when she was grossly exoticized and her prospects reduced to playing stereotypical parts because there were no other characters offered.

“When I see myself in those roles with those obvious makeups and costumes, such as they were, I hate seeing it. I don’t like it. It makes me sad for myself…angry sometimes and sad that I felt obliged to do this kind of stuff,” explained Moreno. Watch the video of the full conversation with Moreno and the filmmakers above.

Struggles with mental health have formed part of Moreno’s journey for many years, but in therapy she found help to become a more complete person and tackle the cracks in her psyche, as she describes them. Furthermore, she chose to speak on this topic without caveats in front of the camera. Her utmost certainty to bear it all out, even subjects as crushing as her suicide attempt or being raped by her agent at 17, stunned Pérez Riera.

“I made a promise to myself that if I was going to do such a thing as this documentary, I was going to be as truthful as possible,” said Moreno. “No hanging back with little details here and there. I would not allow myself the luxury, if you could call it that, of revealing certain things but not completely.”

As the life-time achievement accolades and festivities continue to roll in for the Boricua icon, it’s important to remember that when it comes to Rita Moreno one should never speak of her career as something left in the past. At nearly 90 vibrant years of age as the multi-hyphenate continues to be present on screens big and small.

This December a new chapter comes full circle for her with the updated version of “West Side Story,” for which she collaborated with Steven Spielberg. Moreno was excited to learn that the renowned director recently watched the documentary, and was impressed both with the creative approach and Moreno’s life. His glowing notes meant further validation.

“In fact, Steven, after he sent me the congratulatory [message], the next morning I got another text from him that said, ‘I can’t get your life story out of my mind.’ How about that!’

This Article is related to: Awards, Video and tagged International Documentary Association, Latino, Rita Moreno, Rita Moreno: Just a Girl Who Decided to Go for It