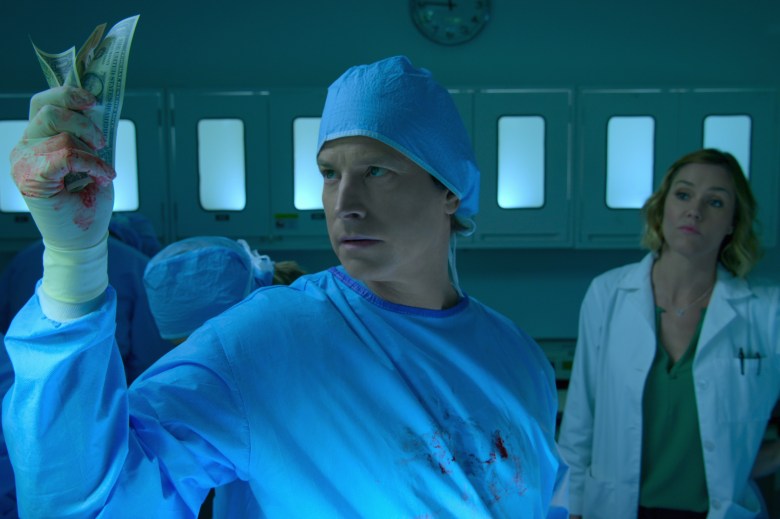 “There’s just not that much backstory to my character, Owen Maestro. I’m just a doctor. I don’t even know what kind of doctor I am. I think I’m a brain surgeon.” That’s how Rob Huebel described the character of Dr. Owen Maestro, a persona he’s portrayed through seven seasons of “Childrens Hospital” and more importantly on Netflix’s new action comedy “Medical Police.” “This is a story about dumb people who don’t know how dumb they are that are tasked with saving the world,” he said.

Huebel, who stars alongside fellow “Childrens Hospital” alum Erinn Hayes (who also reprises her role as Dr. Lola Spratt), spoke to IndieWire about “Medical Police” and the differences between satirizing medical dramas and action films in the vein of “The Bourne Identity.” “All of the tropes of an action movie have to seem real. The action has to look cool. And then, you just layer all the jokes on top of that,” he said. For example, when discussing the inspiration for a stunt in the series’ second episode: “Everyone is un-killable, they can run down the side of a building, and as a viewer, you’re like, ‘Well, of course that would happen, of course you could survive that.’ But I think we have a pretty good time on this show of taking the air out of that.”

As for the international setting, Huebel admitted that although it may look like they spent tens of millions of dollars shooting on location around the globe, that most of the series was actually shot in Croatia, because in Huebel’s words: “No one knows what Croatia looks like.” One thing that Croatia did bring to the table (outside of identifiable landmarks) was a crew with tons of experience working on “Game of Thrones,” and the differences between the two shows could not have been more stark, with Huebel stating that occasionally crew members would chime in with suggestions that “Medical Police” were better if it featured more nudity, sex, and beheadings.

As for why Netflix chose Huebel and Hayes to star in “Medical Police” from the myriad of “Childrens Hospital” cast members, Huebel intoned that it all came down to one factor: sex appeal. Before adding a second factor: availability.

“Medical Police” is now available to stream on Netflix.