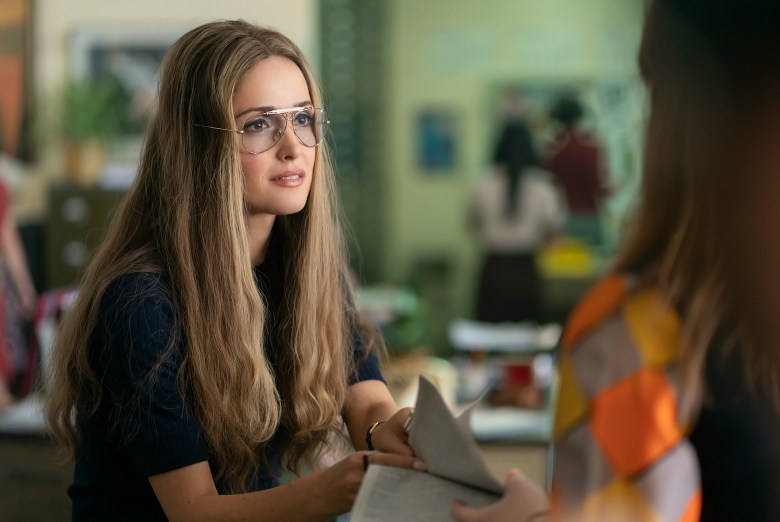 Rose Byrne is the epitome of cool as Gloria Steinem in FX on Hulu’s “Mrs. America,” a searing look at the push to pass the Equal Rights Amendment as experienced by both sides of the movement. Alongside fiery performances from Cate Blanchett as anti-feminist Phyllis Schlafly and Margo Martindale as U.S. Representative Bella Abzug, Byrne’s energy channels Steinem’s cool and collected nature to great effect. The “Bridesmaids” actress embodied the reserved persona so well, it was enough to make a person wonder if that was the vibe Byrne exuded in her own life.

The beauty of acting is that it allows the audience — and most likely the actor, too — the opportunity to forget that a person is not who they say they are. But the other side of that is a thirst to know what that actor is really like.  So here we have Byrne, and actress playing a real person — and an icon with decades in the media spotlight — trying to balance her own experiences as a working mother in the media spotlight. Humanity, for whatever reason, isn’t content to see actors as blank slates on which their characters are drawn and instead demands to know the intimate details of their lives, so they can compare and contrast.

So it’s with great comfort that I can report to you that Byrne is a real person and that speaking to her about “Mrs. America” was a chaotic affair with background shifts and hair adjustments and seeking out perfect lighting, all undertaken by Byrne as she sang the praises of the series and the cast and crew and what being a part of the experience meant to her. She laughed — a lot — forgave me when I flubbed questions, and rolled with every punch.

One of the most unexpected aspects of the rise of video interviews while in lockdown — stay with me, I’m going somewhere with this — is that it presents a particular kind of intimacy not always found at junkets or press days. Sitting down with a celebrity in a side room at the Beverly Hilton, always with six to eight strangers milling about, can feel very exposed and a far cry from anything genuine. However, hopping on a video Zoom call is a mutual invitation into a party’s living room, whatever that may entail. It’s an actress scheduling an interview during her kids’ naptime, a reminder that she’s a real person living a real life with real responsibilities, while her partner (in this case, fellow actor Bobby Cannavale) accidentally wanders across the back of the frame.

And this is where the actress melds with her role. There is something incredibly endearing about Byrne’s ability to roll with the punches, reminiscent of how Steinem rarely loses her cool. And while the actress has had her own run-ins throughout her career with those who might discount her as a woman, she recognized that her experiences were dwarfed by what her character faced.

“I’ve never had the amount of scrutiny that Gloria had,” Byrne said. “In the media she was attacked from left, right, feminists, anti-feminists. She was really in the crossfire for a lot of those years. There’s a real strength to her, beneath her quiet calm and unflappability and serene manner, there’s such a force of nature.”

There was no coincidence that the first cover of Ms. Magazine features a representation of the goddess Kali as a modern woman juggling a multitude of responsibilities — it’s something Byrne does in the day-to-day. And so, in “Mrs. America,” we have Byrne’s warmth mixing with Steinem’s cool and delivering a knockout performance.