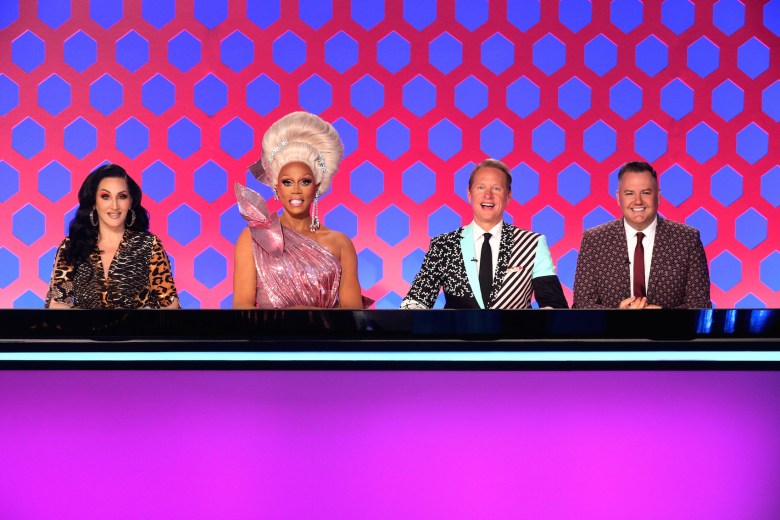 After over a decade on the air, “RuPaul’s Drag Race” is one of TV’s most beloved mainstays. An enduring unscripted franchise, VH1’s “Drag Race” is as popular as ever with both audiences and the Academy: “Drag Race” and its accompanying shows took home 13 Emmy nominations this year, including the fifth for RuPaul as Outstanding Host for a Reality or Competition Program.

The show’s longevity is also due to the team that helps ensure that the judges deciding who continues and who heads home all look their absolute best. Zaldy is a back-to-back-to-back Emmy winner for Outstanding Costumes for a Variety, Nonfiction or Reality Programming, just one part of a decades-long collaboration with the show’s namesake. Curtis Foreman, the show’s head Hair Stylist, is an Emmy nominee for the first time this year. David Petruschin, who longtime “Drag Race” fans may know as Raven, now works behind the scenes on “Drag Race” and “All Stars” as RuPaul’s personal makeup artist. Jen Fregozo is also on the makeup team, making sure that Ross Mathews, Carson Kressley, and the continuous stream of guest judges all look their best.

All four “Drag Race” folks spoke with IndieWire about what their work on the show looks like, from early concept ideas to the thrill of actual filming days.

There’s a certain amount of flexibility that has to come with putting a show like “RuPaul’s Drag Race” on the air. For Foreman in the hair department, there’s little room for error, especially with the sheer number of component parts that go into any wig’s final version.

“Everybody thinks that you can just buy a wig and put it on, and it’s going to look like that,” Foreman said. “But to achieve that pattern, and that look that Ru wants, there’s a lot of reconstructing, building, setting. I have to ventilate to get the front of the wig to look like Ru wants it, rolling it, setting it, putting it in the wig dryer, cooling it off from the wig dryer, putting it back on the wig head, styling both wigs — maybe three — and then adding them on and actually sewing them together to give that RuPaul beautiful look that he wants.”

Makeup is a vital part of any of RuPaul’s final looks. It’s also not something that can exist in isolation either. A key element of the design is seeing how the colors and shadows work under the “Drag Race” set’s lighting set-up.

“We spend some time before we even start shooting, doing lighting tests just to make sure each one of Ru’s lights are in the spot we want it to be so that it’s warm enough and there’s not shadow from the lash,” Petruschin said. “So every time we go to film and rewalk the main stage, I’m standing there behind the monitor checking to see that there’s not a shadow, there’s not a light out of place before we even go, ‘OK, we can go to the next one.’ When you’re sitting there looking at drag makeup, you are really picking apart the fine little details in what is created: the cheekbone, the lip shape, the brow, all of that.”

When it comes to the judges’ makeup, Fregozo regularly has to make quick decisions and adjust on the fly. The relatively limited time that some participants have makes her part in the pre-show preparation all the more crucial.

“I love that it’s so fast-paced. It’s like, ‘OK. You have 45 minutes!’ I go from one room to another, literally. And then once we’re on stage, it’s like, ‘Bam! Touch up, touch up, run backstage!'” Fregozo said. “I love the process, too. Working especially with people that I’ve never met before and getting to know them and being with them that day. All our guests that come to the show, they’re such big fans. So it makes my job fun too, because they’re so excited to be here.”

Part of the challenge of keeping a show like “Drag Race” exciting is making sure that the show finds new stylistic evolutions without losing the core of what’s made it a success. Zaldy explained that sense of balance comes direct from the show’s host.

“It’s exciting for us to try to come up with some new shapes and new fabrications. Ru is also a creature of habit. She’ll put a dress on and she’ll be like, ‘I’ll take it in five colors!'” Zaldy said. “She looks for certain silhouettes that somehow seem familiar but are a little bit fresh too. But I mean, from the day I met RuPaul in the nightclubs, I would see Ru on a Wednesday at La Palace de Beauté in denim shorts and a bustier and then Thursday I’d see her in the same outfit. And she’s just like, ‘It works!'”

For more from an emotional conversation about proud moments from Season 12 and each crew member’s respective history on the show, watch the full virtual panel above.