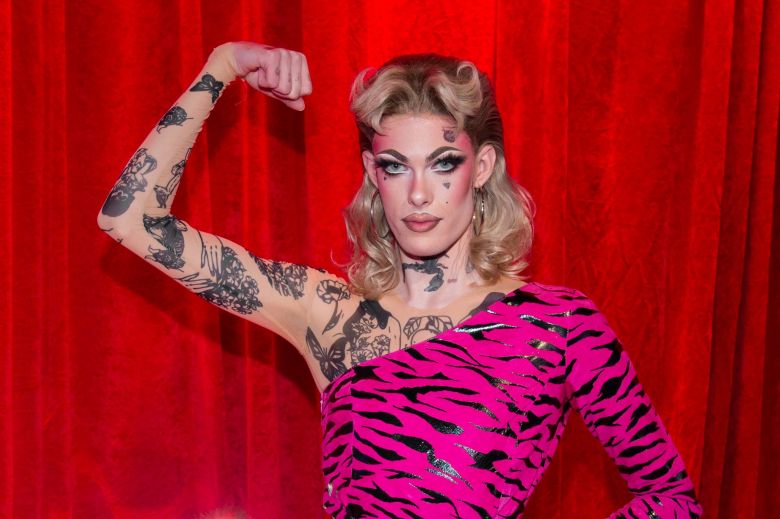 Gigi Goode was sitting in a Jack in a Box with her roommate when she heard that she was cast in “RuPaul’s Drag Race” Season 12.

“I had a chicken tender in my mouth and I got the call, and the first thing they said was ‘Condragulations!'” she said. “And I shit my pants right there and continued eating my chicken tender and started crying.”

Once that situation was cleaned up — I mean, we presume, right? — Gigi, 21, got to work. She has been doing drag since she was a teenager and has watched the show since Season 7, so she knew that she needed to prep for the classic recurring “Drag Race” challenges: Snatch Game, an entrance look, an eleganza look. And that meant she had to call her mom.

Kristi Geggie is a costume designer that has worked with Gigi her entire drag career. “My drag became very 1950s and 1940s inspired,” Gigi said. “I would wear strictly vintage dresses, which came in handy because my mom, as a costume designer, has a cedar closet in our basement full of vintage dresses. At age 16, me as a new drag queen didn’t quite know how to put things together, and my mom would be see me walk out the door and be like, ‘Oh. No, no. No. Let’s go back downstairs and find a different glove for you.'”

Their working relationship evolved to Geggie sewing Gigi’s designs — everything from an homage to Julia Roberts in “Pretty Woman” to the Morton Salt Girl.

One of the key looks for Gigi’s Season 12 debut: the RuVeal on the wearhouse runway. “I’m made up of Scottish and Scandinavian — that’s where my family derives from,” she said. “When they had given us the mood board for the RuVeal, it was like high-fashion, grunge, streetwear. So in my head, I was like ‘What is the most grunge thing I can think of?’ And I was immediately like, ‘Flannel — and safety pins.'”

Geggie and Gigi documented the creation of the look on Instagram, which you can see below:

An exceptional design by Gigi and one of my favorite looks! Plus, flannel is so easy to work with!

*insert bagpipe emoji* Here’s a closer look at my @rupaulsdragrace season 12 Ruveal look designed by me and created by my momma @kgeggie . . . ~also~ be sure to click the link in my bio for tickets to RuPaul’s Drag Con LA May 1st, 2nd, and 3rd at the LA convention center!! It’s gonna be a hoot and a half! #gigigoode

“It was very cozy and very comfortable to wear,” Gigi said. “And it took so many hours of hand-fraying all of the ends. Because what people don’t realize is that if you’re buying frayed clothes, someone’s got to sit there and pick it out, thread by thread. Thread by thread! That’s what me and my mom did for about a week prior to the RuVeal.”