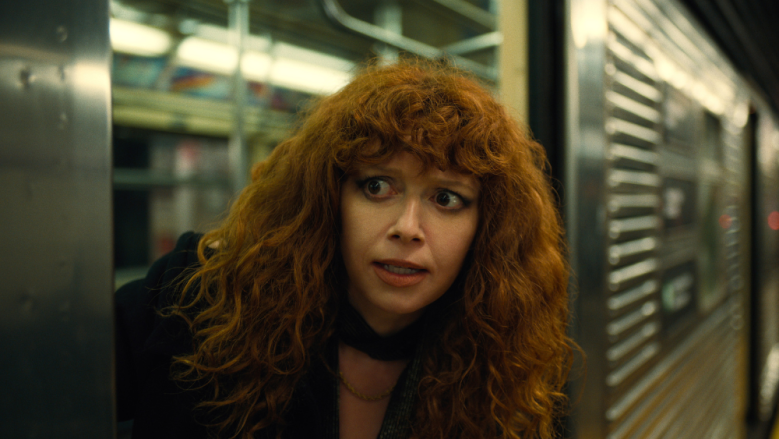 Season 2 of Russian Doll is about a lot of things, from the fantasy of attempting to gain a version of self not limited or defined by familial flaws or generational trauma to stealing from Nazis. But its leaps back through Nadia’s (Natasha Lyonne) and Alan’s (Charlie Barnett) past this season are organized in an intuitive, visually and sonically rich way: they step through time portals by jumping on some very dated 6 trains in the New York subway.

In the video above, Lyonne reveals how much Amy Poehler was at fault for Season 2’s time-travel device and discusses what worked about using signature pieces of Nadia’s New York in order to show how the time-travel worked and how Nadia’s actions could lead to the breakdown of time itself and of all meaning. Lyonne leans on iconography that is squarely New York (and also squarely part of the fringe culture “Russian Doll” revels in) in order to find a way of making the birthday party of Season 1 even more chaotic and of opening up the show to a multiverse of new possibilities.

Watch Lyonne discuss Season 2’s time-travel device above, or listen to the entire discussion below.

In this episode of the Filmmaker Toolkit podcsat, Natasha Lyonne discusses the games that “Russian Doll” Season 2 is playing (of which time-travel via the 6 Train is only one), how she refined her preparation as both a director and an actor over the pandemic, the existential concerns she finds more relatable than coffee shop meet-cutes, plus a little love for everything from Sergio Leone to “The Shining.”

I’m often confused that, you know, things we want and accept are kind of about meet-cutes and coffee shops. Like as a human being, I experience great confusion around that as the status quo of and externalization of life, because I just don’t identify with that experience at all. So in many ways [the success of Season 1] also was, yeah, there’s encouragement to say, “Okay, your point of view is also valid and let’s see what’s next.”

We definitely knew going in that it was sort of “Pink Floyd season,” and in which ways can we use these kinds of detective cues — what we call the “on the case” cues, but sort of build on them sonically with this kind of Jacob’s Ladder game into this underbelly. And obviously there are some people like your Cronenbergs and Dave Lynches, they just play in such a fun way with sound. I remember even in Season 1, we would often talk about the party and this kind of desire to throw sound around that room like the way Altman used to. Not all of it comes to fruition. Visually, a big [influence] for me is always this idea of playing with time, à la Nic Roeg, even when we get into the editing and everything. I just love that sense of fractured time. I think even as a kid I was so in love with Sergio Leone’s “Once Upon a Time in America.” I often talk about “All That Jazz” and “Jo Jo Dancer, Your Life Is Calling,” and even “The Singing Detective” in the sense of a story about somebody who’s, like, from the hospital bed, looking back at a life. But I often think about that phone call ringing and, you know, De Niro in bed in the opium den that sort of launches us into a tale back through time in “Once Upon a Time In America,” and the sort of Sergio Leone version.

He’s also the person I most often try to lie about and say that there’s nepotism there, even though our names are spelled differently. And clearly there is no relation, but I do wish there were.

The New York Subway as a Portal Through Time

The actual subway device is Amy Poehler’s fault. And I say that because I’m the one that actually had to deal with the MTA, but it was a brilliant idea. She came into the room — early days, initial blue sky, but early enough that we were still breaking this device of what was going to be this “portal,” for lack of a better word. And she was like, “Well, if you’re already going to be on the 6 Train going up to visit Ruth at Lennox Hill, why isn’t it just the train? You know, kind of cut out the middleman.”

It was definitely a white light moment in the room. Also that idea of abandoning a limited perspective. I don’t even think that we had registered the ability for the budget [to do that]. And not to say that we weren’t talking about things like “The Taking Of Pelham 123” and understanding that this was a subway season. Obviously it’s a show that loves dealing in the underground and fringes of society and underground made front and center — fringe mainstream. It just really felt like, “Oh shit, right. That’s the fucking thing. What’s more New York than the subway? And what’s more New York than this show?” I say that because of my love of Sipowicz and “NYPD Blue.”

Returning to the Party Sequence of Season 1

The party was always a cracked environment. And then the idea that it is historically accurate to the canon of the show that [the building the party is taking place in] was, once upon a time, a yeshiva is just funny. The idea that those two worlds can converge. Ultimately, it came out a budget necessity. I remember, it was Christmas break. It was like, “Fuck, how do we show that we broke time?” If you can have King Kong come through and topple the Chrysler Building, that’s one way to do it, or a tidal wave or an earthquake. But, it’s not that kind of show. And then it was like, “Holy shit, the party.” That’s our world. Just break our own internal world.

And [the party is] the place that would be the eye of the storm of inciting event, worst nightmare. This is the reset location of this video game that we’re in. And obviously we’re doing a lot of things with similar framing. You know, it’s always that Kubrick Stare game that you seeing of her in the mirror. So there’s an element of that, that whenever those train doors open on Nadia now in what we would sort of call the hero shot, it plays that kind of reset game this season.

I think that Nadia has this instinct, and obviously I identify with it, of “But what if there was anarchy? Would that not be an ideal state? Is life not too organized?” I became really taken with this book by this guy, Carlo Rovelli, called “The Order of Time” and this idea that we may not be seeing time correctly — but is it not this sort of ordered time that gives life meaning? And [on back of] that is this Viktor Frankl “Man’s Search for Meaning” that is what the show is about. And Doug Hofstadter’s “I Am A Strange Loop” book and so on.

We talk about the arrow of time and this idea of “Why can I remember the past, but I can’t remember the future?” And for Nadia, this idea of, “Well, why do I have to fucking play by the rules?” Right? “If I can live and die, why can’t I just sort of break time, reset, reframe, and let’s start this over.” And the idea of putting her in this situation, that would mean that suddenly all of those other experiences may become meaningless in a way, that perhaps it would be like, it’s almost like a vampire complex. So if you’re going to live forever, but then, everyone you know someday will die, what does it look like to have this fantasy of anarchy? Where does meaning go?

Ultimately it’s a season that’s about having to become an adult, whether you’re caught up to it or not. So there’s a knock on the door, it’s coming from inside the house, and it’s saying, ‘Hey, get with it. You’re 40. Now you’re supposed to show up for this parent and you’re the adult. Now you’re the caretaker.” And [it] obviously goes into this sort of “Shining” stuff that [co-creator] Leslye Headland and I always loved so much and the idea of being the caretaker on some deep sort of spiritual level, what does that mean?