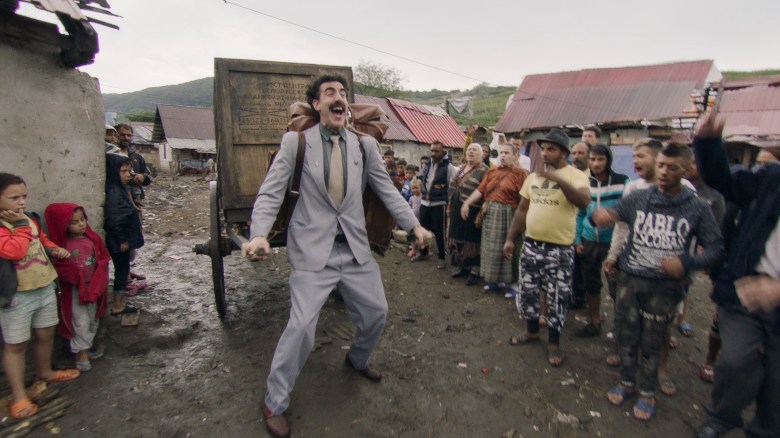 It’s easy to look at a raucous comedy like “Borat Subsequent Moviefilm” and think that Sacha Baron Cohen, director Jason Woliner, and their cast and crew improvised like mad. But like any brilliant comedy, this one started with writers laboring to create the template for this outrageous yet serious sequel, launched 14 years after the original, and motivated by the desire to defeat Donald Trump.

After the midterm elections in 2018, Baron Cohen was concocting another project with his go-to “Borat” team of Anthony Hines and Dan Swimer, when he switched gears and asked them if they thought they could make a Borat movie targeting Trump.

Within 15 minutes they came up with the idea of Kazakhstan giving Borat’s daughter as gift to Mike Pence. Baron Cohen told his agent about it as his writers carried on with their first project, and discovered a meeting with Paramount studio chairman Jim Gianopulos on his calendar. “What’s this?” he asked his agent.

“To pitch the Borat movie.”

“You’d better come up with a story.”

The trio brainstormed for five hours and went in to pitch. Gianopulos, who greenlit the first “Borat,” was interested. (The indie-financed movie later sold to Amazon Studios to get it out before the November election.)

To write a deeper father-daughter relationship comedy, Baron Cohen added three women, Tehran-born writer Nina Pedrad, Erica Rivinoja from “South Park,” and “SNL” contributor Jena Friedman, to his “bunch of blokes,” he said in our Zoom conversation above with him and four cohorts, Hines, Swimer, Friedman and Peter Baynham, out of the nine total writers nominated for Best Adapted Screenplay at the Oscars.

“We knew that Borat was our most popular character,” said Baron Cohen. “We wanted to make a movie that would be seen by as many people as possible. It was a call to action. We didn’t know if anyone would vote after seeing it, but the character with the most influence was Borat. He was also the one who we believed could get Trump supporters to reveal their true feelings, because he was a more extreme version of Trump, a little more misogynistic, more into authoritarianism, caging children… He could get people to come to his point of view. We also realized if he had a daughter, she might be a way to infiltrate Trump’s inner circle and demonstrate the misogyny of that regime.”

The team wanted Bulgarian comedienne Maria Bakalova as Tutar because she “had her own point of view,” said Friedman. “That helped the character, who could have gone in so many different directions. We were looking for her, somebody who felt authentic and could hold her own against the iconic hilarious character of Borat. We knew for her pranks to work, she had to have command of them and be confident… It came to a Venn diagram: Is she authentic, believable, fearless, and in command of the comedy? Would she push back when needed and give the audience the ability to trust what she was doing and laugh at it?”

Friedman was the architect of the infamous Cotillion scene. As the writers dreamed up ways to make fun of Americana, she suggested debutante balls and southern culture, which played into the “misogynistic elements of giving your daughter away,” she said. “When I started, we all shied away from period jokes; they were stigmatized or taboo. It’s 15 years of bubbling to the surface of wanting to do that. It was perfect to be able to push it as far as you want. People have really weird feelings on it. It’s so radical. I can’t believe I got a period-blood dance into a studio feature. It’s so satisfying and radically feminist that you guys let that happen.”

“They expose the hypocrisy by being completely innocent,” said Baynham. “They’re having a blast, they’re not uncomfortable.”

“It’s celebrating something,” said Hines. The movie “was ultimately a message of hope and reconciliation and common humanity. Everyone loves their daughter.”

We will have to wait for the DVD extras to see the full-length Cotillion sequence, including Bakalova doing bloody somersaults. “The behind-the-scenes stuff is almost more interesting than the actual movie,” said Baron Cohen.

The script spiraled to 100 pages. “It was like a concertina that would keep expanding,” said Swimer. “We kept pruning it back to the original outlines.” Then they moved to the table-read stage, inviting “everyone we respected  in Hollywood,” said Baron Cohen, among them Spike Jones, Jay Roach, Adam McKay, Seth Rogen, and Sarah Silverman. “We needed a reality check: ‘Is this crazy? Can this work emotionally?’ We knew for it to be better than the original and match it, it would have to offer something different. You would have to empathize and really care about these characters. We read it out, and people were laughing hard.”

No one at the reading believed they would ensnare the real Rudolph Giuliani in their movie, much less their bigger targets of Trump and Pence. The writers weren’t sure, either; they prepared backup B, C, and D plans. They wound up in the same room with Giuliani and Pence, but an actual journalist foiled their plot to get “journalist” Tutar into the White House press room as representative of Trump’s favorite cable news service, One American News. “We had her inside the White House,” said Hines. “We were moments from getting her into the press briefing room with Trump. Ironically a member of the mainstream media kicked up and said, ‘Wait a second. Who’s she? She hasn’t got press accreditation!'”

“This blew up a promising right-wing career for Maria,” said Baynham. “She could have been the next Sean Hannity on OAN!”

The production faced real danger when it came to getting Bakalova into the hotel room with presidential adviser Rudy Giuliani. Bakalova landed the interview under the guise of a 15-year-old journalist who caters to the one-time mayor’s “preference for women with ample cheese-producing capacity.”

“Some of the people we were thinking of doing instead of Giuliani had Secret Service protection,” said Baron Cohen. “I had training and so did Maria on what would happen if the Secret Service comes into the room amid potential lethal threats. We’d hit the floor if they’re going to jump on you. We would look into things, which in retrospect we would have gotten killed by doing. One idea was me being  plastered into a wall, being there for much of the day. But if a Secret Service person should check the wall and find a body, they’re going to shoot it!”

Another dangerous moment came after Baron Cohen went on hiatus to act in “The Trial of the Chicago 7.” When he returned to film a Virginia gun rally “with thousands of armed men in fatigues walking around,” he said, “the FBI had uncovered a guy who intended to carry out a mass shooting at that rally.” He warned the crew about the risk and most of them turned up anyway.

When Baron Cohen embedded himself with two Q’anon supporters, staying in character as Borat for five days, the only time he could return to himself was in the privacy of his guest room, where he kept his laptop under lock and key. He and the writers had to prepare for the big rally where he would perform as Country Dave, singing “Wuhan Flu.” (“Obama/What you gonna do/Inject him with the Wuhan flu!”) He planned to accompany his hosts to the rally and had to scramble and put his computer away when their knocking pounded at the door.

As for the possibility of doing a “Borat 3,” the question inspires PTSD. “Borat Subsequent Moviefilm” made audiences think and laugh during a pandemic, but it was not fun to make. Winning the Writers Guild award for Best Adapted Screenplay and being nominated for two Oscars is nice, but they already achieved the real goal: releasing the movie before the election.