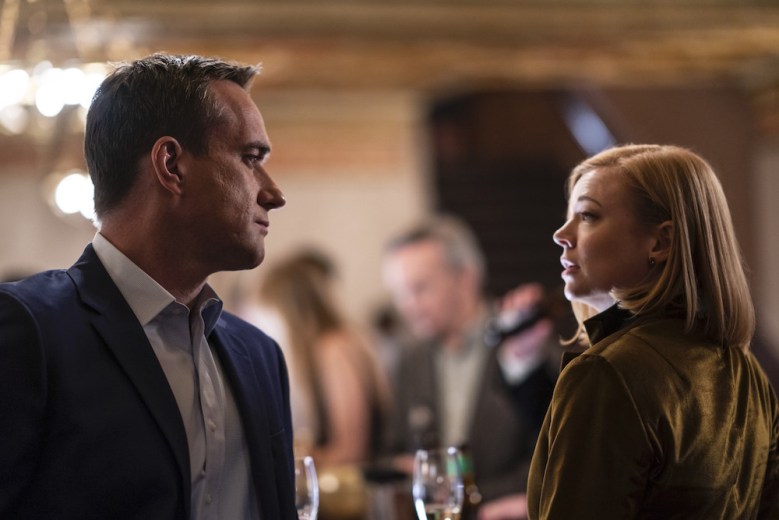 The cast and crew of “Succession” were finally back together, readying themselves to begin production on Season 2, and Sarah Snook had a question for her fake husband, Matthew Macfadyen. “Have you gotten the question, ‘Why are Shiv and Tom together?’ as much as I have?”

You can’t blame people for being a little puzzled by the relationship dynamics in play between Shiv Roy (Snook), lone daughter of the Roy family empire, and Tom Wambsgans (Macfadyen), a well-meaning Midwestern doof gamely trying to keep up with her. And Snook and Macfadyen don’t.

“I remember us having a conversation where we were like, ‘Well, we just say what’s on the page,'” Snook said from Melbourne, where it was 5 p.m. She laughed, as did Macfadyen, in London, where it was 8 a.m. I also laughed, because it was midnight in Los Angeles.

In a recent video interview with IndieWire, the Emmy-nominated actors proved beyond the shadow of a doubt how different they are from their TV counterparts and how delighted they are to bring them to life — even if they don’t always understand their characters’ choices. And in some cases, they’re all the more delighted because they don’t understand.

“They are together,” Snook said. “And so if that’s the baseline of truth, then–“

“–That’s it,” her onscreen husband chimed in. “We have to sort of work it out.”

“That’s what I feel like has been the joy of it, and especially working with you,” she said. “I feel like both of us are equally as baffled by these characters in some way. That’s what the fun and the joy of it is: to just go, ‘Well, I guess I’ll say this to you.'”

“And I believe it because so often, people don’t know why they’re together,” Macfadyen said. “And so often there are couples you go, ‘Why is she with him and he with her?’ But they are and it works.”

That doesn’t make it any less painful when the actors are tasked with selling some of the more bizarre moments in their relationship, whether it’s Tom’s awkward hospital hallway proposal or Shiv suggesting an open marriage on their wedding night.

“I never worry about how to sell it because even if it’s excruciating, which often it is, I just have to gird my loins and think, ‘OK, I’m gonna be sweating with embarrassment while I while we do this scene,'” Macfadyen said.

“Or trying not to laugh,” Snook said.

But no matter how awkward or cringeworthy the Shiv/Tom dynamic can be, it works in large part because it is rooted in real emotion, which is just another thing the actors agree whole-heartedly on. If it wasn’t, then their conversation at the end of the Season 2 finale wouldn’t be nearly as devastating.

“I think Shiv definitely loves Tom,” Snook said. “I think she’s scared of loving Tom. That’s really the thing that holds her at arm’s length to him.”

“I’d agree. I think they do love each other,” Macfadyen said. “There’s so much in the show about love and the absence of love and how that makes people feel. It’s fear and love, it’s like everything. If you don’t feel love then you’re afraid and you lose confidence. It’s complicated. But I think at base they do [love each other].”

Of course, no relationship, on “Succession” or otherwise, is that straightforward. And love is, if nothing else, complicated.

“I think also the fact that she knows that Tom loves her, makes her feel that she loves him,” Snook said. “It’s kind of like the chicken and the egg. I think there’s very much, for Shiv, a difficulty understanding love that’s not transactional.”

“As a result of the peculiar upbringing they’ve all had,” her co-star said, “which by any stretch is weird.”

Season 2 was a journey for both of the characters, as Shiv got drawn into the drama unfolding behind-the-scenes at Waystar Royco and Tom struggled in his new role at ATN, the show’s Fox News facsimile. Though neither character is much for existential rumination, the actors each had thoughts about the state of Shiv and Tom’s collective souls.

“I think Tom thinks he’s kind of brilliant and a really decent guy. Borderline heroic. That’s what he thinks about himself,” Macfadyen said, laughing again. “You know, people have this fantasy about themselves. I think he’s aware that he doesn’t always get it right, but he really is doing his very best with everything. The challenges of his marriage and his wife and his friend and colleague Greg. He’s really doing his best.”

“When the cruise line stuff came out, he immediately thought, ‘Well, I’m going to call a press conference and try to do the right thing,’ and that was shut down,” the actor said.

“I think Tom’s probably a better person than Shiv is. I think she probably knows he’s a better person,” Snook said. “I think she probably also thinks she’s a good person, but only good by comparison to her brothers or by comparison to her family. I think she affords herself the luxury of sitting in this little morality niche, which is, you know, hugely immoral as well, but can fool herself into thinking she’s a good person. I don’t think she’s keeping herself up at night thinking, ‘Oh gosh, I’m terrible, I’m terrible.’ I think she’s like, ‘I just do what I have to do and I can’t be blamed for what I have to do because I have to do it.'”

For more on the gladiatorial aspect of filming those huge group scenes, making consummate professional Brian Cox break, and how to tackle an American accent, check out the entire video above.

“Succession” is available to stream on HBO Max.