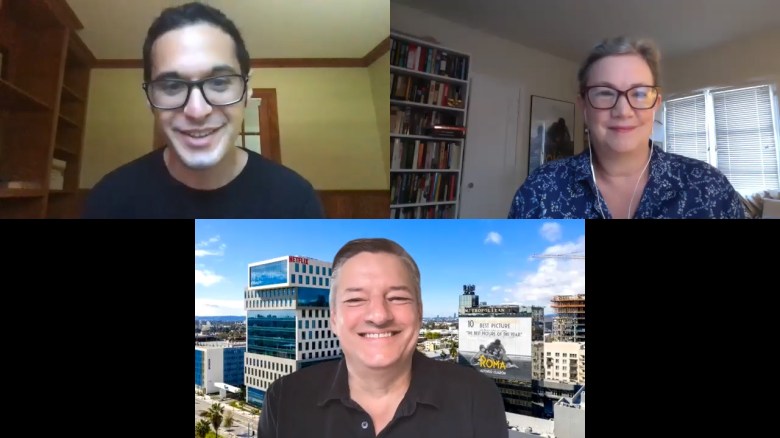 Netflix co-CEO and chief content officer Ted Sarandos has a lot of reasons to feel confident these days. The studio added 10.1 million paid subscribers in the second quarter of 2020, almost three million more than it had predicted for that term. While other studios launched a range of competitive streaming services with mixed results, Netflix continues to barrel ahead as one of the most influential entertainment entities in the midst of a global pandemic.

The executive has been with the company since its inception and guided it through many new chapters, including its transition from a DVD-by-mail business to SVOD and a pivot to original programming less than a decade ago. Now, he’s leading the company into even more uncharted waters, as the future of the theatrical experience is in doubt and the home entertainment solidifies its dominance of the market.

Sarandos was a special guest for a live recording of IndieWire’s Screen Talk this week, where he spoke at length with hosts Eric Kohn and Anne Thompson about how the company has adapted to the current climate. He also pushed back on concerns that a production slowdown could impact the number of new projects coming to market in the year ahead. (Watch the full video of Sarandos’ appearance on Netflix above, or listen to it at the bottom of this article.)

“To be honest with you, we work pretty far out on our series and our films,” Sarandos said. “By the time the shutdown came, we missed some shooting days, but we got back to work in post-production relatively quickly. The demands on everybody’s time clearly got different. But you shouldn’t feel too much of an interruption in the flow of programming.” The company managed to resume and complete some of its higher-profile projects, such as Ryan Murphy’s upcoming musical “The Prom” and Adam Sandler’s “Hubie Halloween,” set to come out in October. Other productions are set to resume in the U.S. and Canada this week. Sarandos said the biggest hurdle has involved new safety precautions, such as “what it’s like to work in PPE all day,” he said. “Getting to understand those things and apply those best practices all over have allowed to be pretty far ahead of the curve in North America.”

At the same time, the company has faced some setbacks on certain productions, such as the Spanish series “Elite,” which shut down last week after a cast member tested positive for COVID-19. “We’re at that phase of life here where we have to figure out ways to keep people safe and working in the environment we live in,” Sarandos said. “And this is the environment we live in right now, unfortunately.”

The company also made the controversial decision to hold off on launching any of its Oscar hopefuls at film festivals this fall, where it has previously unleashed everything from “The Irishman” to “Roma.” This year, the company has high hopes for a range of fall titles, including Aaron Sorkin’s “The Trial of the Chicago 7” and David Fincher’s “Mank.” Sarandos explained why Netflix chose to hold off on launching at festivals such as Telluride, TIFF, or NYFF earlier this year. “We had to make this decision back in March, and at that time, things looked pretty bleak,” he said. “The idea of getting folks together to go the mountains to watch movies in small dark rooms didn’t seem all that appealing to a lot of people.” He was also reticent to create a hard deadline that would force filmmakers to rush through post-production. “We thought that having filmmakers spend that time in editing rooms instead of with their families was probably not a great tradeoff,” he said. “There are a lot of things that aren’t going to happen this year. The urgency of film festivals didn’t seem to supersede that.”

Sarandos also addressed the constant pressure for transparency surrounding the way films and TV shows perform on Netflix as well as the rise of interest surrounding documentaries following the massive success of “Tiger King” on the platform. “The great thing about someone finding ‘Tiger King’ is that sometimes it’s the first non-fiction thing they’ve ever watched,” he said. “And then they go, ‘Oh, this is great,’ and it opens up a world to them — hundreds, maybe thousands of movies they’ve never seen before. Hopefully, that takes them all the way into foreign-language documentary. We’ve seen a big growth in documentary around the world.”

Listen to the full podcast below or watch it at the top of this article.

This Article is related to: Film and tagged Direct, Netflix, Podcasts, screen-talk-299, Video